Come mark the 50th anniversary of the Voting Rights Act in Boston with a panel featuring nationally renowned experts discussing the current state of the VRA, ongoing litigation, and advocacy efforts to restore its protections to all citizens. 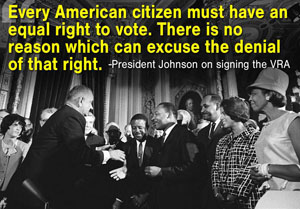 50 YEARS AFTER THE VOTING RIGHTS ACT: A NATIONAL AND LOCAL PERSPECTIVE

Fifty years ago, the Voting Rights Act was passed to ensure equal access to the ballot box for all Americans.  In 2013, the Supreme Court’s decision in Shelby County v. Holder gutted Section 5 of the Act, which had previously required certain jurisdictions with a history of discrimination to seek pre-approval for changes to election practices before they could be put into effect.  Since then, far too many citizens have lost the VRA’s protections.

Come hear nationally renowned panelists discuss the current state of the Voting Rights Act, ongoing litigation and new challenges to the Act in the wake of Shelby County, as well as the effect of positive advocacy efforts occurring at the state level.

A Bill to INCREASE Police Secrecy? No Way!