We will not be intimidated

President Trump must be impeached and removed from office. After inciting his supporters to violently storm the U.S. Capitol while Congress was certifying the election of Joe Biden as our next President, Donald Trump cannot remain in our nation’s highest office.

Our democracy held firm in the face of an utterly appalling attack.

This is a dangerous moment for democracy, those who conspired against the will of the voters and the rule of law should be held accountable.

Two months ago, a record number of Americans overcame barriers to voting — including a deadly pandemic — and chose a new President. And on January 6, we watched in horror as far-right insurrectionists stormed the U.S. Capitol in an attempt to drown out all of our voices.

The U.S Congress has certified the Electoral College total, and President-elect Joe Biden will become President effective at noon on January 20.

There is absolutely too much at stake for our country to ignore the hideous reality that he is unfit to lead. Trump’s behavior in office has fundamentally undermined our democratic norms, our values, and the rule of law. And, rebuilding those vital institutions starts with accountability.

Congress must draw a clear red line that their behavior was unacceptable. It is time to move our country forward, and unify against President Trump’s violent incitement by passing bipartisan articles of impeachment. If convicted in the Senate, Donald Trump can be forever barred from holding public office again.

This is a wake-up call — or a reminder — for every American about the danger we’ve been living with.

Trump has carried out the implicit threat that he’s made for his entire political career: refusing to accept the results of an election that rejects him. He repeatedly refused to commit to a peaceful transfer of power — and when asked on the debate stage to tell the white supremacist Proud Boys to “stand down,” he instead urged them to “stand back and stand by.”

Now, his most extreme supporters have attempted to violently subvert the will of the people in a fair, legal, and certified election.

And, they were able to violently storm and vandalize the Capitol with few arrests — in the same city where police violently attacked peaceful Black Lives Matter activists with tear gas and rubber bullets.  The police must answer for this racist double standard and their passive response to violent white nationalists — and a full investigation of their conduct must take place.

Trump’s many enablers in elected office also bear serious responsibility for this tragedy. History will watch and judge the legislators and state attorneys general who planned to help him overturn the election — particularly the 138 Republicans in the House and 7 in the Senate who voted with Trump even after the violence.

Here’s how you can help: 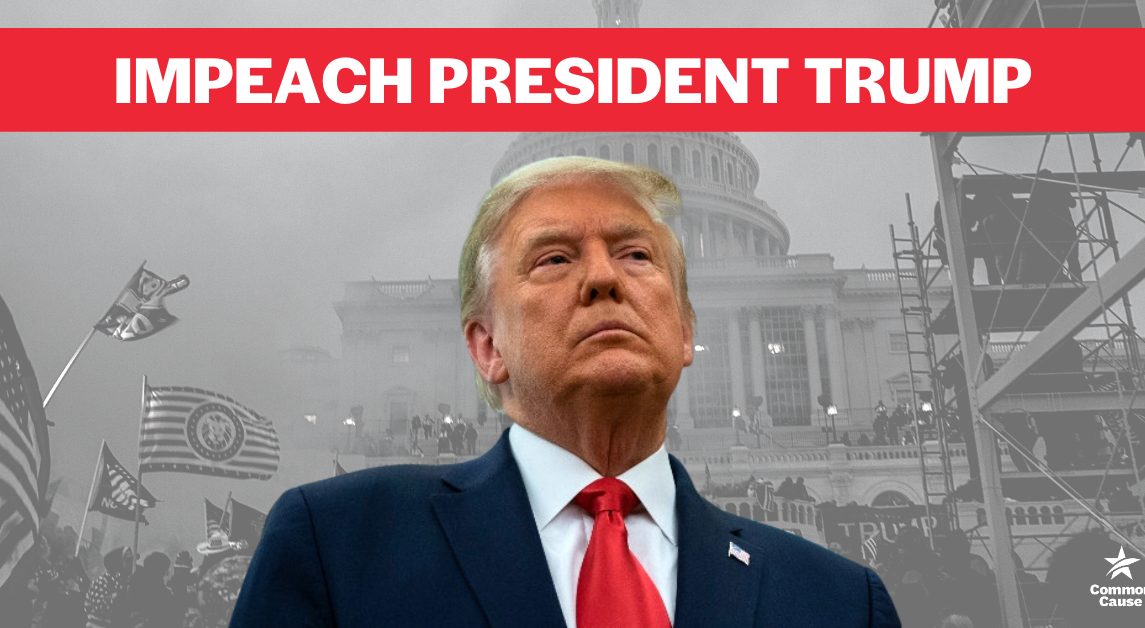 Common Cause is calling for Trump’s immediate impeachment for seditious conspiracy to overthrow the U.S. government — and his Cabinet must invoke the 25th Amendment to remove him from office. He must be removed by any legal means.

President Trump and his enablers incited this violence, and they must be held accountable — including the lawmakers who violated their sacred oath to the Constitution by joining in his efforts to undo a legitimate election.

Trump must be stripped of power now by any legal means — impeachment for seditious conspiracy to overthrow the U.S. government, as well as the invocation of the 25th Amendment.

Common Cause is calling for Trump’s immediate impeachment for seditious conspiracy to overthrow the U.S. government, and his Cabinet must invoke the 25th Amendment. He must be removed from office by any legal means.

If you don’t know already, check this list to see whether your member of Congress sided with democracy by voting to respect the will of the people, or with President Trump by voting to overturn the results of a legitimate election. (You can find your representative and their direct phone number here.)

Call your lawmaker’s number or the capitol switchboard at (202) 224-3121 and urge them to vote for impeachment. Here are some ideas of what to say:

If your lawmaker voted to uphold the election results: “Hi, this is [NAME] from [TOWN]. I’m calling to urge you to join a unified, bipartisan vote to impeach President Donald Trump for his deliberate incitement of last week’s violent attack on the Capitol to overturn the election. I appreciate that you voted to respect the will of the voters and against your colleague’s baseless conspiracies — now I ask you to hold Donald Trump accountable by impeaching him.”

If your lawmaker voted to overturn the election results: “Hi, this is [NAME] from [TOWN]. I’m calling to express my outrage with your vote last week to overturn the election results when there were no legitimate objections. I encourage you to join a unified, bipartisan vote to impeach President Donald Trump for his deliberate incitement of last week’s violent attack on the Capitol.”

Use the form on this page to let us know how your call went!

Trump has escalated his attacks on democracy from spreading disinformation to inciting violence at the U.S. Capitol. He is a clear and present danger to the nation and must be impeached.

Violence will not alter the outcome of this fair, democratic election. Trump incited his supporters just moments before they broke into the Capitol. He must be held accountable and removed from office as quickly as possible.

After inciting violence at the U.S. Capitol, Trump cannot remain in our nation’s highest office. He must be impeached and removed from office as quickly as possible.

YES! I will pitch in for the Emergency Impeachment Fund to remove Trump from office

Getting the 67 votes we need for Senate conviction is within the realm of possibility — and even if we fall short, it is vitally important that every lawmaker go on the historical record, and side either with the mob that stormed the Capitol to overturn a legitimate election, or with the millions of Americans who are demanding accountability right now.

So, if we can seize this opportunity — and act decisively to protect our democracy from Trump and his aspiring authoritarians — we can take some of the most important action in our 50-year history to ensure we leave a strong democracy for the next generation.

We’re counting on every Common Cause Member who cares about American democracy to step up right now. Can you rush your contribution to our Emergency Impeachment Fund today?

We won’t be intimidated. It’s time to draw a line in the sand.

Common Cause is calling for Trump’s immediate impeachment for seditious conspiracy to overthrow the U.S. government, and his Cabinet must invoke the 25th Amendment to remove him from office. He must be removed by any legal means.

Furthermore, the Members of Congress who joined Trump’s call have violated their sacred oath to the Constitution — which Rep. Cori Bush (D-MO) has called on the Ethics Committee to investigate, potentially leading to their expulsion from Congress.  And, there must be accountability for the people who violently stormed the Capitol– as well as a full investigation into the Capitol Police’s conduct in response.

Americans have a right to peacefully protest, but there’s no place for a violent insurrection in our democracy — especially in an attempt to overrule the will of the voters and overturn a free, fair, and democratic election.

But even as a far-right mob stormed the Capitol — Trump posted messages of support on Twitter, repeated his baseless lies about the integrity of our election, and menacingly urged all of us to “Remember this day forever!” — posts that our Stop Disinformation program invoked as we successfully petitioned Twitter to suspend his account.

Trump and his enablers have exploited social media platforms to amplify disinformation and incite violence, sowing seeds that could lead to the destruction of our democracy. For the sake of future generations, we absolutely cannot let them succeed.

Our democracy is worth defending — and it requires the continued efforts of each and every one of us to maintain it for the next generation. The dangerous forces responsible will remain long after Trump leaves office. 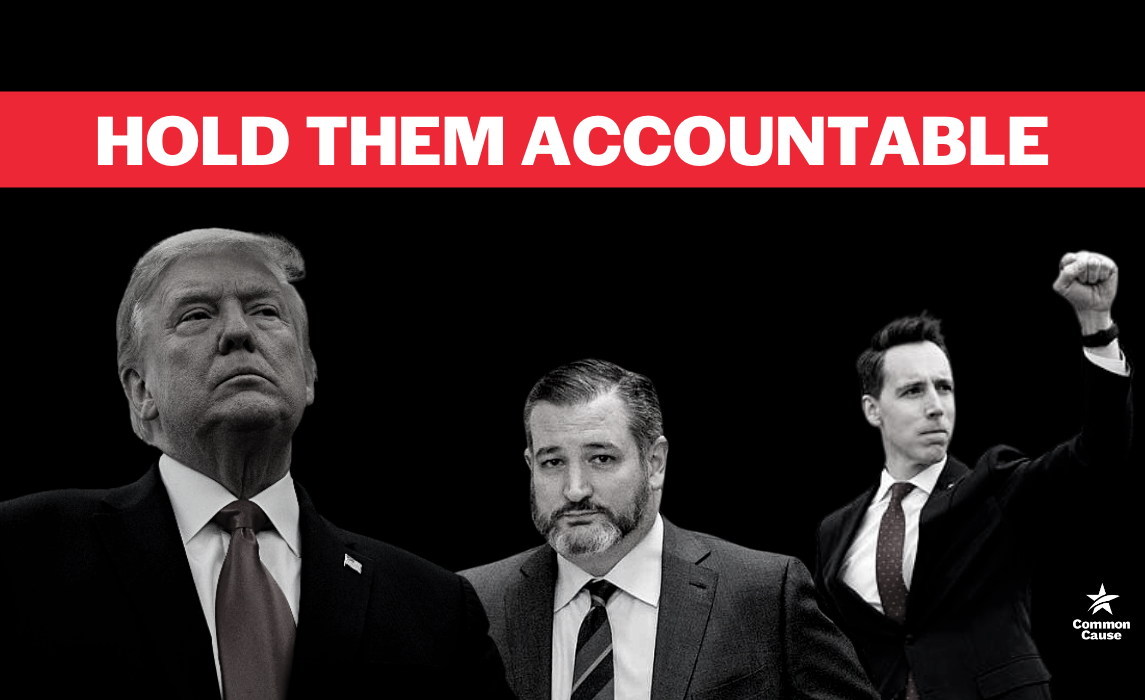 CONGRESS AND THE PRESIDENTIAL ELECTION: FAQ Regarding January 6 Joint Session