‘We Will Not Be Ignored’

'We Will Not Be Ignored'

By now, the town hall meeting in Salt Lake City with Rep. Jason Chaffetz on February 9 is old news. However, having been there, I find that I keep revisiting my impressions.

The New Administration Is Energizing a New Crop of Activists

By now, the town hall meeting in Salt Lake City with Rep. Jason Chaffetz on February 9 is old news.  However, having been there, I find that I keep revisiting my impressions.

There was a huge crowd, far larger than the attendance at other town halls I’ve been to or read about. The meeting originally was scheduled for a local government building, but was moved to the Brighton High school auditorium (approximately 1,000 seats) to accommodate expected attendees. Even so, fewer than half of the people who came could get inside. About 1,500 people who didn’t make it inside held a spirited rally outside the school. Though I arrived an almost an hour early, I ended up sitting near the back of the auditorium.

I remember the raw emotions of the crowd inside.  Most people came to criticize Chaffetz’s actions; their anger and disorderliness were inflamed by poor event organization. 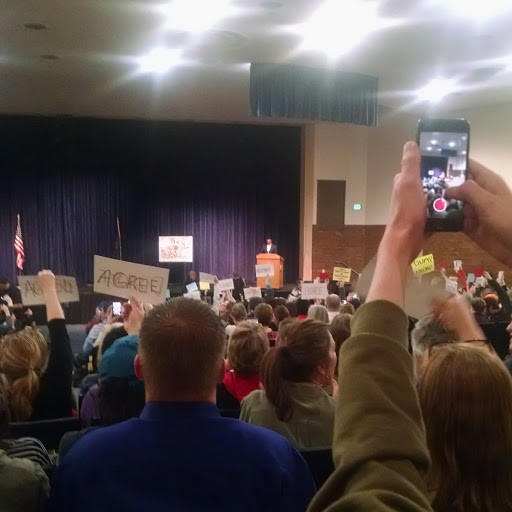 Before the auditorium was full, someone ordered the doors closed even though well over than 50 empty seats remained.  Amid chants of “Let them in!” officials insisted that more people would violate fire codes. Because everyone could see the open seats, people were angry even before Chaffetz appeared.

Things got worse from there. There was NO MICROPHONE for those in the audience who wanted to raise questions. It was difficult to hear both questions and comments, so people started shouting and interrupting. Chaffetz chose speakers, and sometimes – but not always – repeated the questions for the benefit of the audience. Frequent boos and jeers made discourse almost impossible. When the audience saw evasiveness or disagreed with speakers, their anger and frustration were overwhelming. Many participants had signs to hold up with “Disagree” or “Agree” handwritten on them, but these silent comments were far from adequate.

I did not even attempt to ask a question in this charged atmosphere. Most of the concerns that were raised (when I could hear them!) were ones I shared, including calls for an investigation of Trump’s economic conflicts of interest, alarm over health care program changes, and preservation of environmental resources. Nobody was able to ask a direct question about Trump’s possible collusion with Russia, even though several people shouted “Russia!” (out of order).

Chaffetz had a hard time responding, especially when he was drowned out by the audience.  I have read other accounts of the town hall meeting in which Chaffetz’s responses sound clear, reasoned, and audible. The actual experience was loud, disorderly, and hard to follow.  To his credit, the congressman attempted to face his angry constituents for awhile. However, the meeting lasted only for slightly over an hour, well short of the two-hour time posted online.

For all the stress and frustration, the meeting was inspiring. It demonstrated that many people are worried about the new presidential administration, frightened by the changes they see, and feeling disempowered. Even in conservative Utah, there is a growing number of people who are critical and willing to challenge those in authority.  Hopefully, we will not be ignored, and our willingness to speak out will give members of the legislative branch of our federal government the courage to act as we did, questioning the actions of our elected officials as they unfold.

Ravel Departing FEC With a Challenge to the President