President Donald Trump is not listening to the US intelligence community and is making our families less safe. This opinion piece originally appeared in USA Today. 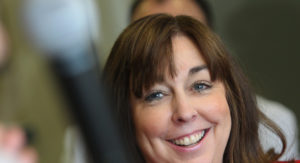 Americans expect and deserve a president who puts the nation and its security before his personal interests and whims. President Donald Trump’s approach to international affairs has been indifferent at best, and at worst, openly hostile to more than 70 years of bipartisan agreement on global alliances that have kept us safe. His fascination with dictators and so-called strong men is dangerous. The president’s well-documented lies and exaggerations are disturbing and unprecedented, but when he openly ignores and ridicules the findings of the U.S. intelligence community, he puts American lives at risk, diminishes our role in the world, and makes us all less safe.

In several cases, U.S. intelligence has been at odds with Trump and his public statements. Trump has, for reasons still under federal investigation, chosen to listen to Russian President (and former KGB officer) Vladimir Putin rather than top U.S. intelligence officials. The investigation dates to Russian interference in the 2016 election. Heads of the major intelligence agencies say that the interference is ongoing, and that foreign actors will view the 2020 presidential election as an opportunity to advance their interests.

Intelligence leaders have not identified a security crisis at the U.S. border, even as the president has said that he is considering an emergency declaration forcing the military to build his border wall. Intelligence has warned that the Islamic State is capable of attacking America despite Trump’s declaration that ISIS has been defeated.

Lastly, U.S. officials have said that Iran is actually not trying to build a nuclear weaponin violation of an international agreement with the United States, which is the opposite of what the Trump administration has stated and then walked back.

One read of these circumstances is that Trump wishes to be allies with the very countries U.S. intelligence is most concerned about. Whether the president wishes to acknowledge it or not, U.S. intelligence has made it clear that the U.S. role in the world is on the cusp of being seriously challenged. He is making us less safe.

The intelligence community’s work is vital to our national security and our international interests. Congress must be ready to step in to prevent further erosion of our global standing. No judicial confirmation or tax cut is worth jeopardizing the safety of our democracy. Every member of Congress must put country before party — Americans, our global allies and all freedom-loving people around the world are watching.

Karen Hobert Flynn is president of Common Cause. You can follow her on Twitter: @KHobertFlynn. This piece originally published by USA Today.

Maddow: Kansas Shows Why "For the People Act" is Needed, and Has Momentum