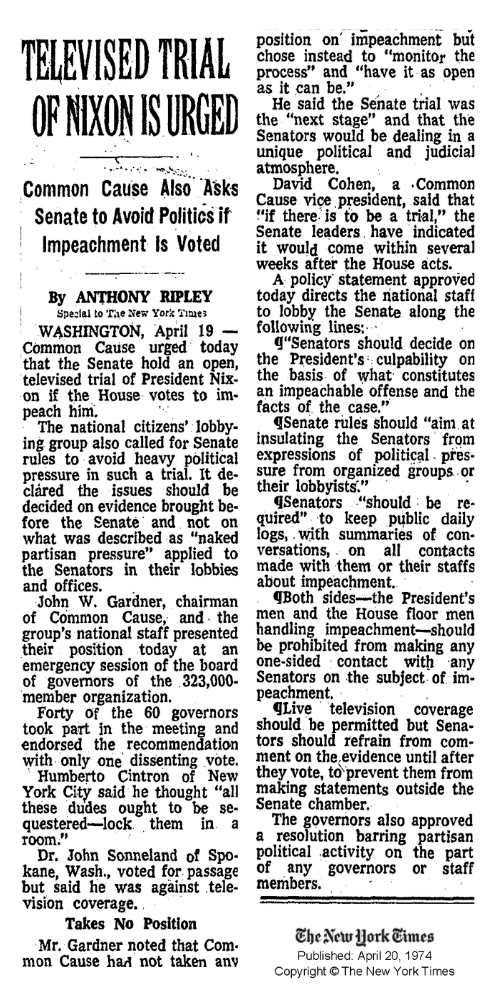 As the U.S. House continues their impeachment inquiry of President Trump, we found a timely article from The New York Times, published April 19, 1974. The piece covers Common Cause’s call for a televised Senate trial if President Nixon is impeached by the House. Of course, it never got that far as Nixon resigned before the House could impeach him.

If the U.S. House of Representatives impeaches Trump, we must make sure there is a fair trial in the U.S. Senate. Maybe some of Common Cause’s criteria from 1974 can help shape what a fair trial would look like.

TELEVISED TRIAL OF NIXON IS URGED

By Anthony Ripley, Special to The New York Times

WASHINGTON, April 19 —Common Cause urged today that the Senate hold an open, televised trial of President Nixon if the House votes to impeach him.

The national citizens’ lobbying group also called for Senate rules to avoid heavy political pressure in such a trial. It declared the issues should be decided on evidence brought before the Senate and not on what was described as “naked partisan pressure” applied to the Senators in their lobbies and offices.

John W. Gardner, chairman of Common Cause, and the group’s national staff presented their position today at an emergency session of the board of governors of the 323,000‐member organization.

Forty of the 60 governors took part in the meeting and endorsed the recommendation with only one dissenting vote.

Humberto Cintron of New York City said he thought “all these dudes ought to be sequestered—lock them in a room.”

Dr. John Sonneland of Spokane, Wash., voted for passage but said he was against television coverage.

Mr. Gardner noted that Common Cause had not taken any position on impeachment but chose instead to “monitor the process” and “have it as open as it can be.”

He said the Senate trial was the “next stage” and that the Senators would be dealing in unique political and judicial atmosphere.

David Cohen, a Common Cause vice president, said that “if there is to be a trial,” the Senate leaders have indicated it would come within several weeks after the House acts.

A policy statement approved today directs the national staff to lobby, the Senate along the following lines:

The governors also approved a resolution barring partisan political activity on the part of any governors or staff members.

Texas Leaders: Do Not Turn Over Driver's License Data for Citizen Count

Not a Job for Siri: Why Automated Redistricting Is the Wrong Fix for Gerrymandering