The “Coalition of Conscience” and the Shaping of Democracy

The “Coalition of Conscience” and the Shaping of Democracy

It’s been a good week for democracy.

It’s been a good week for democracy.

In Roanoke, Virginia last Thursday, several hundred people flocked to a city park to push their congressman, House Judiciary Chairman Bob Goodlatte, to stand up for the voting rights of their fellow citizens across the country.  And in Washington, D.C., on Monday, a 5-4 majority of the Supreme Court affirmed the right of those citizens to use the vote to protect and strengthen the Congress and state legislatures coast to coast.

The Roanoke gathering centered on the Voting Rights Act and Goodlatte’s refusal to convene a hearing on legislation that would strengthen it.  Unpersuaded or unwilling to admit that some state laws and voting practices work to block citizens from voting, Goodlatte is functioning as a roadblock on the legislative process.

The Roanoke rally was an exhilarating reminder of what democracy looks like. A “Coalition of Conscience,” in NAACP President Cornell W. Brooks’ memorable phrase – crossing ethnic, generational, gender, sexual orientation, faith, and single-issue lines – united to call for restoration of our nation’s voting rights.

Reverend William Barber II, architect of the “Moral Mondays” national interfaith movement that began in North Carolina, reflected on state-level moves to disenfranchise voters of color, the young, elderly or disabled, after the Supreme Court’s evisceration of the Voting Rights Act two years ago in Shelby County v. Holder.  He evoked the memory of murdered Emanuel AME Church Pastor and South Carolina State Sen. Clementa Pinckney, declaring that “Anything less than fixing the Voting Rights Act now is a sin.”

The landmark Voting Rights Act of 1965 was signed into law as blood was being spilled across the South to keep African Americans from exercising the power of the ballot.

A comprehensive new study sheds light on the importance of the protections written into the law but gutted by Shelby.  This fresh trove of empirical evidence proves that more than 90% of voting rights “events” – including successful lawsuits and consent decrees – that resulted in pro-minority changes, occurred in jurisdictions that were required to obtain preclearance of their voting changes prior to Shelby.

Thus, Shelby effectively replaced the pre-clearance by the Department of Justice of electoral changes prior to implementation, shoving the burden onto disenfranchised voters, unfair elections, and costly, protracted litigation in our already congested judiciary.

Some of the post-Shelby laws are starting to crack, but only with the hard work of skilled organizers, advocates, and litigators.  With a trial on the merits of North Carolina’s omnibus disenfranchisement law scheduled for mid-July, Republicans in the state swiftly and unexpectedly adopted a substantially less onerous photo ID bill.  The new bill passed last week, only after evidence piled up against the strict photo ID law that was set to be vetted as part of the upcoming trial.  Meanwhile, the outcome of Texas’s strict photo ID bill still hangs in the balance.  In late April, the Fifth Circuit Court of Appeals heard an appeal of the trial court’s finding that the law purposely discriminates against minority voters and amounts to an illegal poll tax.

In contrast to Shelby, the Supreme Court’s ruling on Monday in Arizona State Legislature v. Arizona Independent Redistricting Commission was a reminder that the Justices sometimes get things right.  In one of the last decisions this term, the Court championed the power of direct democracy, ruling that citizens may establish independent redistricting commissions to prevent state legislators from engaging in self-serving, partisan gerrymandering.

Writing for the majority, Justice Ruth Bader Ginsburg quoted James Madison to defend that constitutional right: “The genius of republican liberty seems to demand . . . not only that all power should be derived from the people, but that those intrusted with it should be kept in dependence on the people.”

The Court’s championing of the power of the people in Arizona Independent Redistricting Commission sharply contrasts with its dismantling of our republican liberty in Shelby.

The action in Roanoke and the high court’s decision are necessary reminders during these cynical times that with unified, continued pressure, “We, the People of the United States” can prevail.

This is what democracy looks like.  Join the “Coalition of Conscience” to Hold Power Accountable and call on Congress to pass the Voting Rights Advancement Act!

Below are some pictures from the rally: 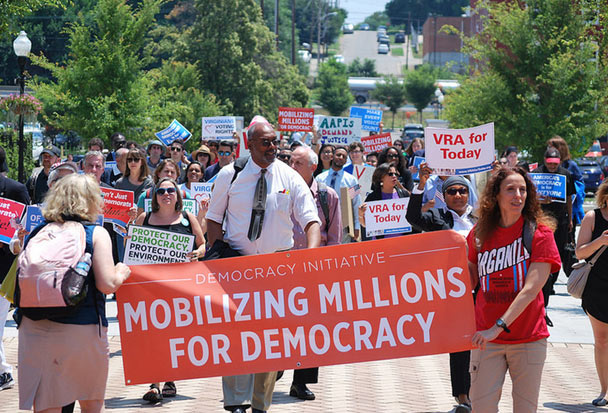 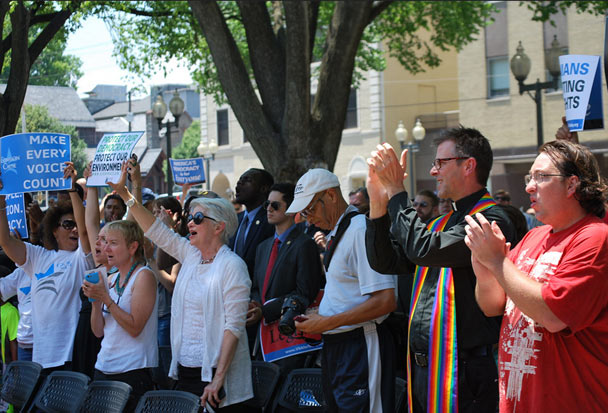 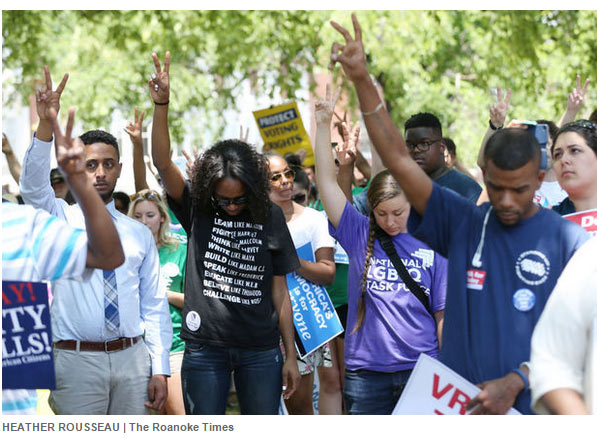 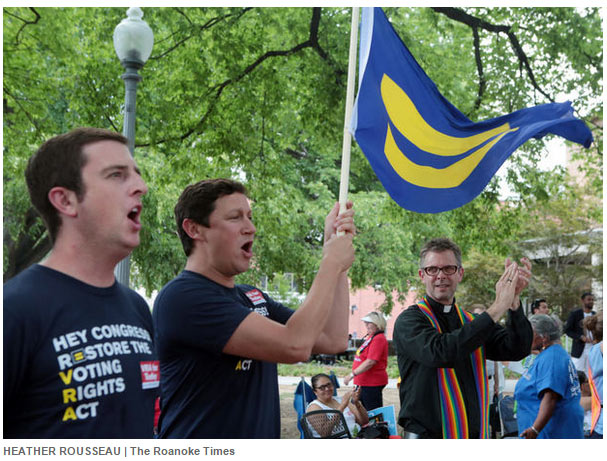