Hidden donors are bankrolling more than one-third of the nation's governors and their policy agendas through phony non-profit groups.

Two reports issued this week by government watchdog groups provide fresh and disquieting evidence of the continuing damage being done to American politics by runaway – and often secret – political spending.

“Shadow Governors,” a study released by Citizens for Ethics and Responsibility in Washington (CREW), reports that governors of 19 states have ties to non-profit political front groups that take advantage of a loophole in federal tax law that permits them to conceal their donors. More than half Republican governors and one-quarter of the Democrats have connections to the secretive groups and some of the governors are connected to multiple groups, CREW concluded.

Prominent governors exploiting this weakness in our campaign finance laws include Republicans Scott Walker of Wisconsin and John Kasich of Ohio, who has hinted he may challenge President Trump’s renomination in 2020. Democrats linked to dark money include Govs. Steve Bullock of Montana and Andrew Cuomo of New York, also considered potential presidential candidates.

The CREW report highlights both “dark money” organizations, which funnel money from hidden donors into campaigns, and what CREW calls “shadow governance” groups, which use money raised in the shadows to advance a governor’s policy agenda. 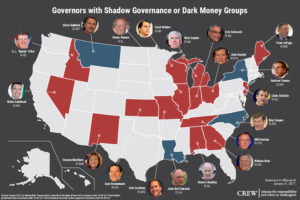 Meanwhile, in “Private Prisons: Principally Profit-Oriented and Politically Pliable,” the National Institute on Money in Politics documents nearly $12.5 million in political and lobbying spending during 2016 and ’17 by the private prison industry.

Prison operators and vendors that serve them put more than $2 million into campaigns for governor and other state offices and $10.4 million into state lobbying, the report asserts. Some of the biggest chunks of the money went to candidates and political parties in Florida, where Gov. Rick Scott has shifted management of seven prisons to private firms, and Virginia, one of only two states that had a gubernatorial race in 2017.

In Florida, the industry invested $1.7 million in lobbying. Meanwhile, in Virginia, Ed Gillespie, the failed Republican candidate for governor, was the greatest single beneficiary of the industry’s campaign spending; his campaign received more than $82,000.