As Americans face $1.2 trillion in student loan debt and 60 percent of Americans support a plan to give students the same interest rates as big banks, Wall Street banks -- many of which profit off student loans -- spent more than $100 million on the 2014 election. 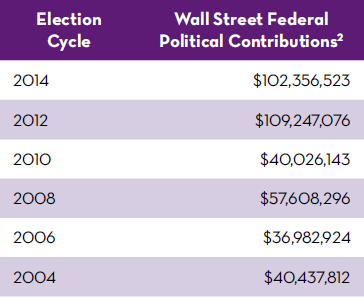 Contessa Jackson knew she was making a good investment when she enrolled at Eastern Kentucky University. She was part of the first generation in her family to attend college and earned a bachelor’s degree in health sciences. Once she graduated, though, she realized the hardship that would come with paying off her student loans. Forced to bear an interest rate nearly double the normal market rate at 3.86 percent, Contessa took on numerous low-wage jobs in the health care field, working more than 70 hours a week to make ends meet. She never looked for a handout, and paying for her college education was important to her, but the cost of her degree was increased by more than $2,000 a year due to high interest rates on student loans. Contessa’s student loan debt left her struggling to pay her car payments, save for retirement, buy a home, and start a family.

“I hardly feel empowered on this issue regardless of my vote,” Contessa told us.

Although mounting debt among college students and graduates threatens to ignite another economic crisis, Congress has failed to address the problem, hamstrung by obstruction and gridlock. At the same time, members of Congress have taken millions in political contributions from corporations and banks that profit the most from growing student loan balances.

Ideas to help solve the student loan crisis such as one plan to fix the student loan crisis, sponsored by the Center for American Progress and titled “Higher Ed Not Debt,” includes providing additional support to borrowers and changing funding structures. Legislation similar to that plan has not moved in Congress. Senator Elizabeth Warren’s bill to allow an estimated 25 million people to refinance their student loans at lower interest rates also stalled in 2014 when the Senate minority blocked it with a filibuster, even though recent polling shows that 60 percent of American voters support Senator Warren’s plan.

According to a report by MapLight, a money-in-politics research organization, senators who voted against Sen. Warren’s student loan bill received 58 percent more in political contributions from banks, lending institutions and student loan companies than did the Senators voting for it. Senator Mitch McConnell, a strong opponent of Warren’s bill, topped the list with nearly $1 million in industry funding since 2001.

One big company making money off student loans is Sallie Mae, a publicly traded corporation that owns about 20 percent of all student loan debt. Since 1992, Sallie Mae has spent more than $7.4 million on political contributions to members of Congress and more than $39 million on lobbying.

The result? Sallie Mae has a stronger voice in Congress than do the 37 million Americans saddled with student loan debt. Those Americans are largely unable to renegotiate their interest rates with Sallie Mae, and the law bars them from including student loan debt when they have to declare bankruptcy.

These same banks and corporations are also some of the biggest contributors in our political system.

A Common Cause analysis of political spending during the 2014 midterm elections shows that Wall Street banks and financial institutions spent more than $102.3 million on federal political contributions in the 2014 cycle. Political spending by big banks in the 2014 midterm elections was more than double what the sector spent in 2010 ($40.4 million) and nearly triple the industry’s 2006 midterm contributions ($37 million).

The special interest group with the most money has the loudest voice in Congress. When Wall Street faced financial catastrophe after the 2008 crash and needed Congress to act quickly, lawmakers responded with a $700 billion bailout bill. And while Wall Street banks enjoy a tiny 0.75 percent interest rate on loans from the Federal Reserve, former students pay 6.8 percent or more on their federal student loans and much higher interest rates on private student loans.

“Although big banks are spending millions in elections, they fail to recognize the detrimental impact student loan debt has on students like myself,” Contessa Jackson told us. “Student loan reform would mean hope for my future… I’ve worked hard to achieve my current accomplishments, yet I fear I won’t reap any benefits because of my outstanding student loan debt and interest rate.” Contessa and millions of other Americans struggling with student loan debt continue to wait for real reform. Meanwhile, Congress is hard at work representing the interests of big financial institutions seeking to profit from student debt.