Slaying the Gerrymander in Ohio

Slaying the Gerrymander in Ohio

A big thank you to all the redistricting reformers! Together, we can slay the gerrymander. It’s been busy! Ohioans have been collecting signatures at Halloween parties, concerts and at Early Vote. On Wednesday, November 1, the Congressional Redistricting Working Group held its second public hearing. 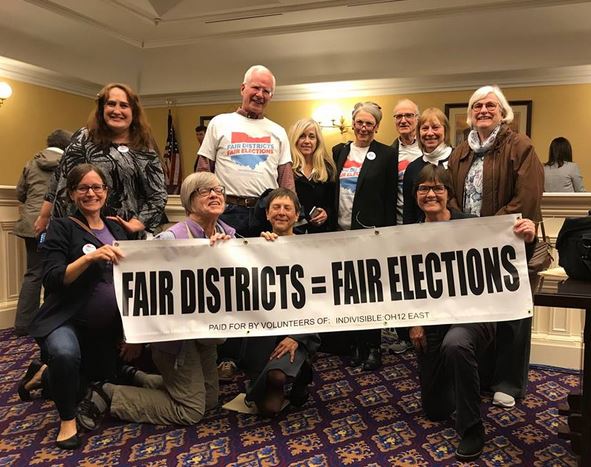 The hearing room was packed and twenty people testified. Three people from Mercer County testified from about the importance of fair districts. Each of them were from a different congressional district!

Michael Li from the Brennan Center for Justice at New York University testified that Ohio is one of the six of the worst gerrymandered states in the entire country.

Professor Ned Hill of the Glenn School of Public Affairs at The Ohio State University drew laughs from the crowd describing congressional districts and also testified about the problem with uncompetitive general elections:

“Drawing a set of packed and gerrymandered legislative districts has resulted in functional disenfranchisement of unaffiliated voters and here is the looming Constitutional crisis. What has occurred in Ohio in both congressional and state-level electoral contests is a shift in political power from general election to primaries. Today, primaries are where political contests are being decided in Ohio. Left without their voices and choices are unaffiliated voters.”

Mosie Welch shared her experiences “on the sidewalks of Medina County” collecting signatures. Stark County and Licking County also were well represented. Rita Kipp of the League of Women Voters of Licking County described gerrymandering as “taking the wind out of the sails of democracy.”

Catherine Turcer of Common Cause Ohio called on the Working Group to listen to the voters and support congressional redistricting reform the way they did state legislative reform:

“Some of Ohio’s leading newspapers have suggested that this working group could be a ruse – an effort to convince the hard-working volunteers to stop collecting signatures and when they do, you will put forth a partisan replacement that does little to restore democracy. I urge you to prove those skeptics wrong. Ohioans should get the opportunity to vote on a proposal that would truly reform our system of designing congressional districts.”

Life-long Republican Don Thompson of Hilliard was even more pointed:

“It is my view that the legislative inaction – the severe lack of responsibility from within the Ohio General Assembly – has resulted in forcing many many thousands of volunteer hours to be spent collecting signatures to provide an opportunity for voters to insist on responsible congressional redistricting reform.”

Cleveland.com has more on the hearing: Ohio Legislators Say Gerrymandering Needs to be Fixed but Will They Act?, November 2, 2017

Watch the hearing on the Ohio Channel.

Don’t forget that we need to stay 100 feet from the polls. This is a buffer to protect voters. It is usually marked by flags. If the line to enter the polling location goes beyond the 100 feet then the buffer is extended an additional 100 feet. Questions? Send us an email at ohiofairdistricts@gmail.com.