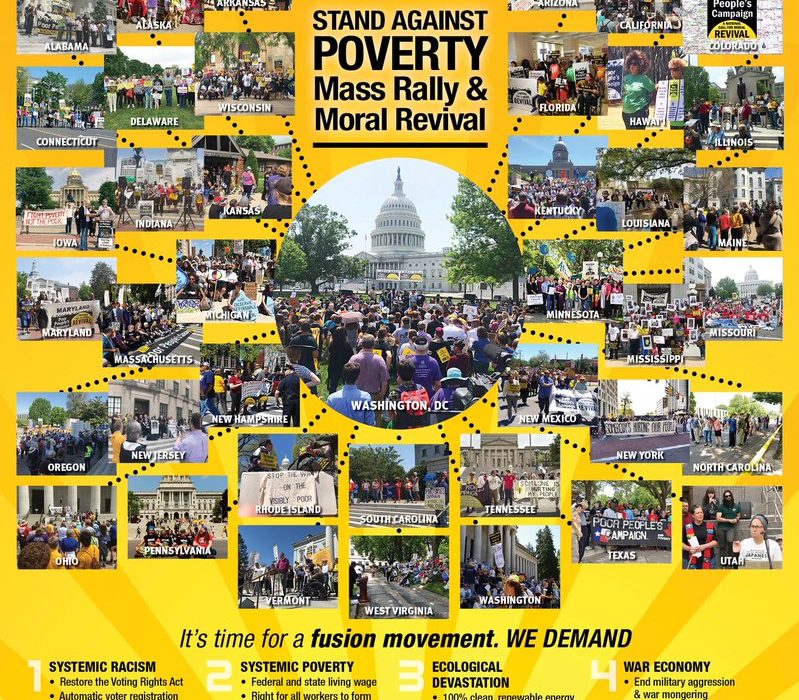 The Poor People's Campaign is busing and ridesharing thousands of people to Washington for Saturday's march and rally.

Organizers of the nationwide Poor People’s Campaign (PPC) are appealing to democracy activists nationwide to converge on Washington, D.C. this Saturday for a march and rally concluding their #40DaysofAction civil disobedience campaign.

The events begin at 10:00 a.m. at Jefferson Drive SW & 7th Street on the National Mall. Participants will march from there to the U.S. Capitol.

Their campaign is pushing a variety of democracy reforms, including several that Common Cause has been working to advance in state legislatures across the country. The list includes restoration and expansion of the federal Voting Rights Act, an end to racial gerrymandering of congressional and legislative districts, early registration for 17 and 18-year-olds so they go on the voter rolls automatically when they turn 18, early voting, and same-day registration.

They also demand automatic restoration of voting rights for formerly incarcerated individuals, statehood and representation for residents of the District of Columbia, and a faster path to citizenship and the right to vote for immigrants.

The campaign’s leaders include the Rev. William Barber, the North Carolina clergyman whose weekly “Moral Monday” marches on the statehouse in Raleigh have drawn national attention to a fight there against restrictive voting laws and racial and partisan gerrymandering plans passed by the state legislature. The PPC casts itself as a counter to “religious extremist” groups it says are distorting our “national moral narrative.”

The PPC argues that democracy reform is the vehicle for Americans to come together and fix the systemic issues that plague our country. The movement’s agenda includes a call “to remind our nation what truths we hold to be self-evident,” an affirmation of our constitutional values.

RSVP, search for events in your local area, and find or provide a rideshare to get to D.C. event this Saturday: https://www.poorpeoplescampaign.org/june-23/

Jane Hood is a Common Cause intern.