Overlooked Election Disinformation on Google is a Danger to our Democracy

Google is one of the few companies Americans find trustworthy to provide them with accurate information, yet Google’s efforts to stop the spread of election disinformation fall short due to significant gaps in its policies. 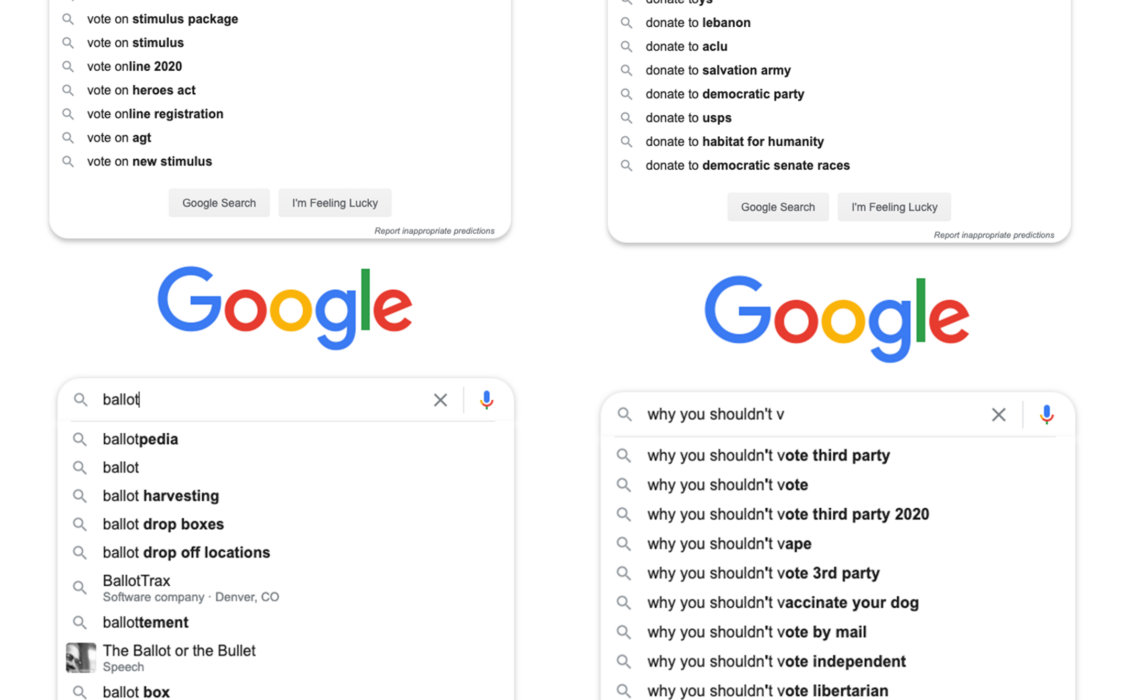 We are less than a week away from Election Day with millions of voters having already cast their ballots, but election disinformation seeking to suppress voter turnout continues to spread across all major social media platforms. Congress has held multiple hearings including one this week with the “Big Tech” CEOs examining the role of social media platforms in disseminating disinformation. While much of Congress’ attention has focused on the problems Facebook and Twitter continue to have, election disinformation on Google has flown under the radar.  Because Google is one of the few companies Americans find trustworthy to provide them with accurate information, users seeking voting information could be led to disinformation that discourages them from voting undermines the integrity of the election.

Google owns a vast array of products and features that bad actors can exploit to steer users towards disinformation. Google’s search engine alone provides multiple vectors for disinformation. For example, the company’s search engine includes an autocomplete feature, which matches the characters that a user has typed into the search bar with previous searches that start with those characters. Google also utilizes a ‘related searches’ feature, which shows keywords or phrases at the bottom of every results page that other users who searched for the same term also requested. Google News is another potential source of misinformation during the election season. Outside of Google’s search tools, the company manages a vast digital advertising business where bad actors can place misleading ads about elections and voting while users view search results or watch YouTube videos.

To be clear, Google has acknowledged it has a disinformation problem and has implemented policies to limit the spread of election-related disinformation and misinformation. However, Common Cause uncovered numerous instances of election disinformation across Google’s products. For example, Google autocompleted searches for both “don’t v” and “why you shouldn’t v” with search terms dissuading people from voting. We found that some Google searches for “vote,” “how to vote,” and “voting” all directed users to related searches about online voting, such as “vote online,” “how to vote online,” and “online voting website.” After we notified Google, the company took down much of this content, finding it was in violation of existing civic integrity policies. Nevertheless, these examples highlight Google’s inconsistent enforcement of its policies. Like Facebook and Twitter, Google has significant resources and should not have to rely on civil society groups to monitor whether its policies are being enforced. 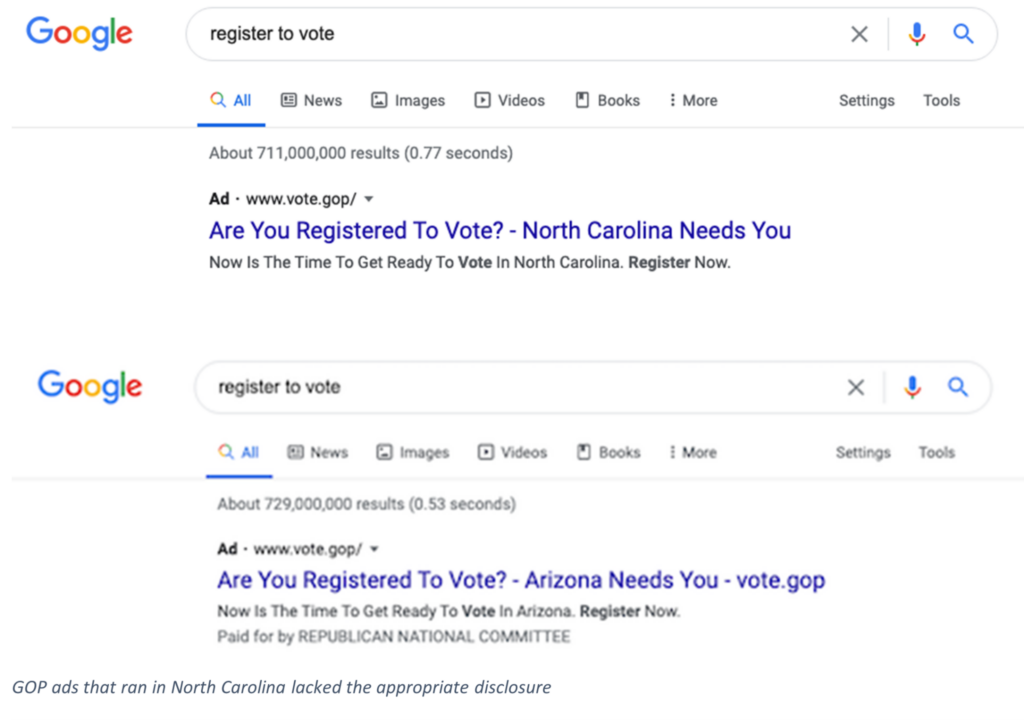 In addition to inconsistent enforcement — for example, we found an example where an issue-based ad by the GOP was properly disclosed but a nearly identical one was not (Google confirmed that they removed the non-disclosed ad after we alerted them to it) — Google’s efforts to stop the spread of election disinformation fall short due to significant gaps in its policies. For example, while Google has policies against ad misrepresentation, the platform allows advertisers to run ads promoting websites owned by anyone. This means advertisers can use Google search to place election ads that support or oppose candidates on websites intended to serve as a nonpartisan source for voting information. Further, Google has disclosure policies on political ads but defines those ads very narrowly. This means bad actors can target Google users with issue ads that contain misleading information about voting by mail without having to disclose who paid for them. Unless Google expands its definitions of harmful content when it comes to online voter suppression and advertisement disclosure policies, this content will continue to persist.

Because of Google’s significant reach and the high trust users have when searching for information, election disinformation on the platform poses significant risks to our democracy. While election disinformation remains a problem across all social media platforms, Google can no longer hide from the spotlight. The platform must do more to consistently enforce and expand its civic integrity policies to combat online voter suppression, and policymakers must do their part in holding Google accountable.

Why Ethics Are Essential