Ohio Partisan Fairness Standard Would Be First In U.S. for Congress

Ohio Partisan Fairness Standard Would Be First In U.S. for Congress

Ohio has the opportunity to lead the way again and improve democracy by mandating partisan fairness in the drawing of congressional districts.
Only 11 states explicitly prohibit partisan gerrymandering or have some protection against drawing districts for political advantage. 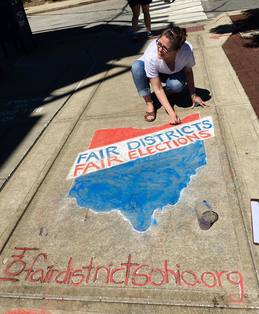 Ohioans have been leading the way for many years. More presidents were born in Ohio than any other state. Ohio is also the birthplace of aviators and astronauts. And we all know that Cleveland rocks!

Ohio has the opportunity to lead the way again and improve democracy by mandating partisan fairness in the drawing of congressional districts.

Only 11 states explicitly prohibit partisan gerrymandering or have some protection against drawing districts for political advantage.

The Bipartisan Congressional Redistricting Reform Amendment would extend Ohio’s prohibition, which currently applies only to General Assembly districts, to congressional redistricting. The measure’s explicit ban on partisan gerrymandering is a huge step in the right direction, but another section of the proposal takes an even more novel approach. This initiative would make Ohio the first state in the country to directly address one of the most common types of congressional gerrymanders: those in which districts are drawn to give a party far more seats than its vote totals should allow.

Following the last census, many state legislatures drew congressional districts designed to give one party this unfair advantage. In 2012, the first election post-redistricting, Republicans won 51 percent of all votes cast for Ohio’s U.S. House of Representatives candidates while Democrats won 47 percent. Despite this somewhat even vote split, Republicans won 12 of 16 congressional races, a whopping 75 percent of districts. A similar pattern in favor of Democrats can be seen in states such as Illinois and Maryland, where Democrats drew districts.

The Bipartisan Congressional Redistrict Reform ballot initiative would address this discrepancy directly with the following provision:

This provision would ensure that, for example, if Party A has won about half of the state’s total  votes in elections for statewide offices (examples: governor, senator, and attorney general) over the last 10 years, the Ohio redistricting commission would choose the plan that would give Party A the opportunity to win about half of congressional seats. This would discourage the manipulation of elections through the slicing and dicing of communities to rig districts in a way that is not representative of the politics of the state.

No state in the U.S. currently targets partisan gerrymandering of congressional districts with such pinpoint accuracy. In addition to the ballot initiative’s other protections against one-party dominance of redistricting, this unique partisan fairness measure will help Ohioans lead the way in the nationwide fight to end gerrymandering.

There are many ways to help slay the gerrymander. An essential step is collecting signatures and helping to get the word out about the need for fair districts and fair elections.  Together, Ohioans can lead the way!