With 2016 presidential candidates filing new third quarter campaign finance reports with the Federal Elections Commission, Common Cause completed an analysis of the percentage of small donors (those who give $200 or less) among the donors of the candidates.

With 2016 presidential candidates filing new third quarter campaign finance reports at the Federal Election Commission, Common Cause examined the support each candidate is receiving from small-dollar donors (those who give $200 or less).

This analysis uses the total reported fundraising for each campaign; it does not include money collected by non-profit groups, Super PACs, or any other committees aligned with the campaigns. All data below came from FEC filings.

Who’s Raised The Most Cash from Small-Dollar Donors?

Indeed, the combined total of small-dollar gifts to Sanders and Carson alone — $50.3 million — is more than that of such donations to all their competitors combined — $49.6 million.

While some candidates, particularly Sanders and Carson, are raising the majority of their money from small-dollar donors, others are heavily relying on outside groups and super PACs to fund their campaigns.

For instance, Right to Rise, the super PAC supporting former Florida Gov. Jeb Bush, has received contributions from seven mega-donors that each equal or exceed the total the Bush campaign has raised from small-dollar donors. 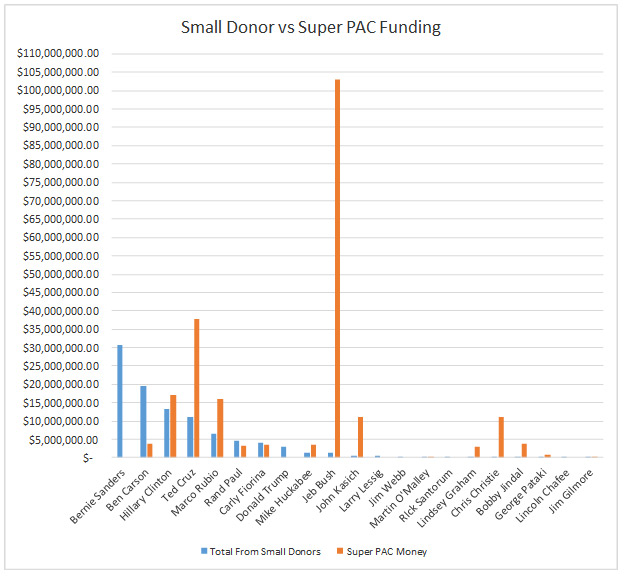 Jeb Bush says he supports disclosure, so here are a few policies he could endorse

Is Change Here To Stay?