A PDF version of this memo is available here.

Common Cause Ohio has obtained a copy of an email that reveals even closer connections between Governor Mike DeWine and lobbyists for the utility and sports betting industries than previously known. In the analysis of the connections below, we show how Ohio’s current lax disclosure and transparency laws contribute to a status quo where industry insiders have undue — and undisclosed — influence in the political power and decision-making processes of our state government.

According to an email sent by former fundraiser Mary Sabin in October 2019 recently obtained by Common Cause Ohio, Gov. Mike DeWine holds a “weekly finance call.” While it is not unusual for officials to continue to fundraise soon after their elections with an eye on the next election, this email identifies fundraising support from seven prominent “hired gun lobbyists,” each of whom is registered to lobby the executive branch of state government. Together, these lobbyists have 126 clients.

A fundraising call that includes so many lobbyists is notable because at present, Ohio law does not require lobbyists to disclose any support they give to candidates’ fundraising efforts. It is also significant that so many of these lobbyists have close ties to the utility and sports betting industry.

Registered lobbyists who received the email about the fundraising planning meeting include:

Recommendation:  In honor of Sunshine Week, Common Cause Ohio is calling on the Ohio General Assembly to shine a light on registered lobbyists’ fundraising support for statewide and state legislative candidates. Ohioans deserve to know if lobbyists’ influence expands into fundraising for important decision makers. It’s time to expand lobbyist disclosure to require that registered agents reveal any support they provide to candidates with their fundraising activities in their reports filed with the Ohio Legislative Inspector General.

Why We Need Better Lobbyist Disclosure

While the lobbyists who were invited to the DeWine campaign’s weekly fundraising planning meeting have many clients, an analysis of the email reveals that nearly every invitee has ties to utilities, sports-betting interests, or both.

In addition to the utilities, the FBI has expressed an interest in Ohio payday lenders and the Electronic Classroom of Tomorrow, a now-closed online charter school accused of billing taxpayers for no-show students. No charges have been filed against either.

The FBI appears to have an interest in sports betting, too. Lobbyist Neil Clark – indicted in the House Bill 6 bribery scheme – told reporters that FBI agents lured him to a 2019 meeting by promising introductions to hotel developers who want to offer sports betting. Clark didn’t realize until later that he was talking with undercover agents running a sting operation. No other details of the sting have emerged.

In 2009, Ohio voters handed casinos their first monopoly when they approved a constitutional amendment that allowed them to operate in Ohio but restricted gambling to just four locations selected by casinos.

On March 1, 2021, Gov. DeWine called legal sports betting in Ohio “inevitable.” The new Ohio Senate Select Committee on Gaming has been hearing testimony on how it should be structured and regulated. Competing sports betting bills were introduced in the previous Ohio General Assembly, and no new ones have been introduced this session.

Deep-pocketed casinos have publicly stated a desire for sports wagering to be restricted to casinos and racinos. Advocates for public education, bars and restaurants, and municipalities are hoping that sports betting will be allowed in multiple venues, and many are arguing for wagering to be done under the auspices of the Ohio Lottery so proceeds help pay for a promising new school funding formula.

It has already been reported by ProgressOhio that, “Casinos appear to be poised for a big win with help from the same policymakers, lobbyists and consultants who supported the nuclear bailout law now at the center of the FBI’s ongoing bribery investigation.’’

In the Oct. 29, 2019, email, then-DeWine fundraiser Sabin invited 9 people to what she called “our weekly finance call,’’ and she wrote, “The focus of our discussion will be about maximizing upcoming events. We will also brainstorm about potential out-of-state events.’’ In the email, Sabin briefed the group on seven fundraising events between Nov. 12 and Dec. 5, 2019, and said she hoped the group would brainstorm about out-of-state events in 2020. According to Ohio campaign finance reports, nearly $500,000 was raised by the DeWine campaign at the events listed in the email.

THE BIGGEST HAUL CAME FROM THE NOV. 13 EVENT IN COLUMBUS

The Ohio Coal Association gave $5,000 at the “Columbus catch-all” as well.

Held at Cleveland’s Union Club, the breakfast raised $34,000 from nine donors. Three of the nine donors work for clients of Josh Rubin. They include:

The event’s biggest donation – $10,000 – came from Halliburton, which is not represented by any participant in the weekly fundraising call.

The recipients of the email are well-connected and clearly helped the Gov. DeWine’s re-election campaign raise nearly $500,000 at just six events, but most of them are well-connected lobbyists seeking specific advantages for their clients.

A list of the email recipients, and their publicly known utility ties and sports-betting interests, follows:

Gerhardt is a registered lobbyist for Duke Energy Business Services and for the Cincinnati Reds – a professional baseball team interested in how sports wagering is structured. Reds CFO Doug Healy testified on March 10 that all Ohio pro sports teams support sports betting. You can watch his testimony here.

Duke is part owner of coal plants that benefited from the bailout.

Hillis is a long-time lobbyist who is registered to represent several important players with an interest in the bailout and sports betting. His sports betting clients include Jacobs Entertainment, Caesars and Scientific Games. He also represents the Ohio Coal Association – an ally of utilities at the center of the scandal.

According to the Ohio Coal Association website, its “associate members’’ include the Calfee Halter law firm, which lists “gaming and hospitality” among its areas of expertise; and Akron-based Roetzel & Andress, a firm that has long represented FirstEnergy and its subsidiaries.

According to the Calfee firm’s web page, “With clients ranging from casinos and racinos to various hotels, restaurants, and other gaming and hospitality organizations across the country, Calfee attorneys are experienced at serving the unique business and legal needs in this regulated industry.’’ The contact person the firm lists for gaming and hospitality interests is Leah Pappas Porner, who has been a long-time FirstEnergy lobbyist. Porner is also registered to lobby for sports betting interests such as the Cleveland Cavaliers and Cleveland’s Jack Casino and Thistledown racino.

In addition to working for FirstEnergy and its affiliates, Calfee employs a lawyer who filed incorporation papers in 2018 for Consumers Against Deceptive Fees. The “dark money” group was created to try to undercut FirstEnergy rival Cleveland Public Power.

Hadden is a lawyer who has represented AEP and who served on the board of Empowering Ohio’s Economy, a dark money group funded by bailout beneficiary AEP. The group gave $900,000 to organizations that do not have to disclose their donors – groups at the center of the federal bribery case.

After the donations were made public, Hadden told reporters he was surprised to learn that the recipient of the money violated a written requirement to only use the funds for social welfare purposes and not “in furtherance of any political or campaign intervention activities.”

Gov. DeWine appointed Kaplan to serve on The Ohio State University Board of Trustees.

Some OSU officials have expressed concerns about including college athletics in any sports-betting law.

His law firm, Kaplan & Walker, lists utilities, gaming and ethics among its areas of expertise.

Oberle lobbies for both Penn National Gaming and Gaming and Leisure Properties, which is the landlord for many Ohio casinos and racinos.

Oberle also is a partner at the law firm, Ice Miller where he is “a member of the Public Affairs and Gaming Group and Energy and Utilities Group,’’ according to the firm’s website.  Among his achievements he lists “drafting two constitutional amendments and work on implementing legislation/regulations on casino/video lottery terminal gaming,’’ and “Working on utility issues before the Public Utilities Commission of Ohio.’’

The fundraising email also reveals a previously unknown link between a DeWine top-tier political appointee and utility interests. DeWine Policy Director Michael Hall is a former Ice Miller partner whose tenure overlapped with Oberle’s. Hall’s LinkedIn profile said he was an Ice Miller Partner from July 2017 to June 2018, while Oberle’s biography states he has worked at Ice Miller for 16 years.

Rubin is a lobbyist registered to represent FirstEnergy. He founded the CJR Group which lists “energy and environment” among its main areas of expertise. CJR used to employ DeWine Chief of Staff Laurel  Dawson. Although she never lobbied for FirstEnergy, her husband, Mike Dawson, lobbied for FirstEnergy from 2011 to 2013 and continues to consult for them.

Sabin has no known ties to utilities or sports betting interests. 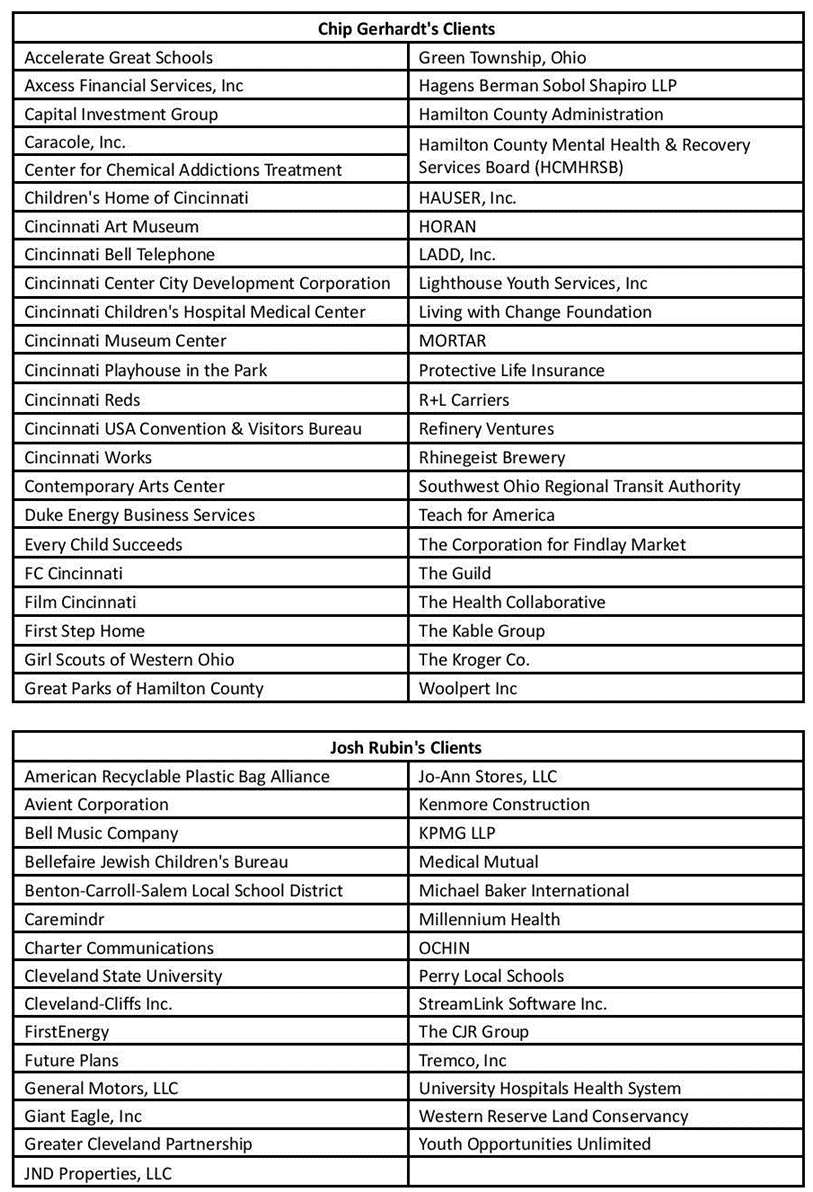 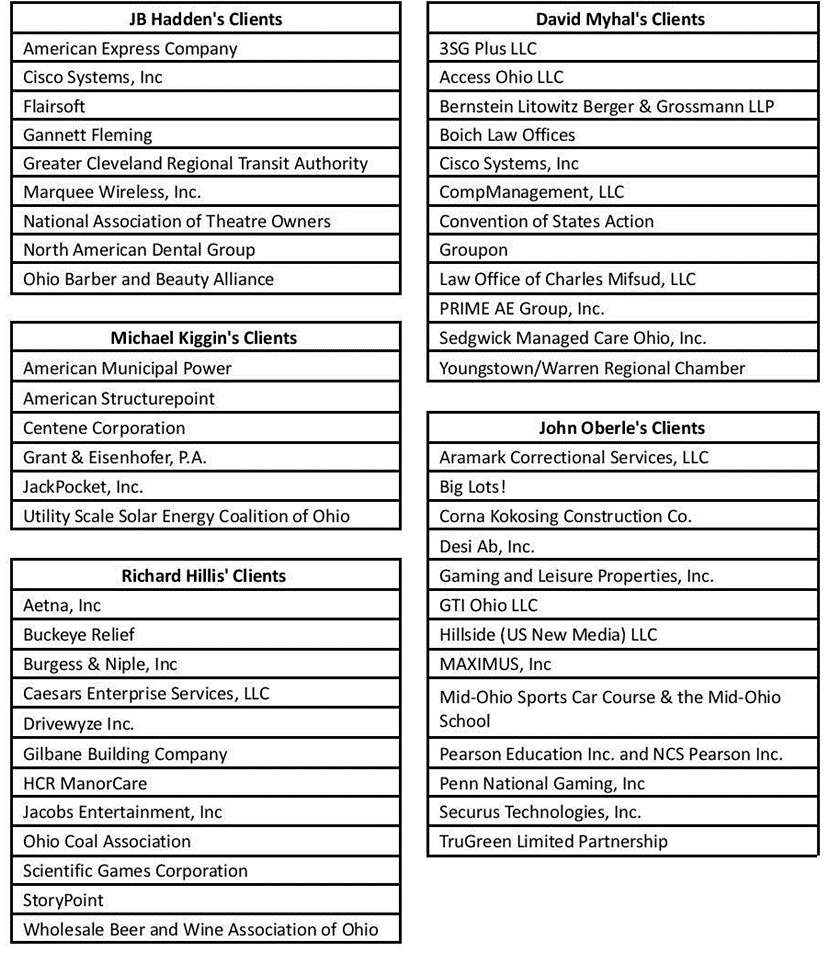 Sunshine Week (March 14-20) is a celebration of open government and greater transparency. Founded by the American Society of News Editors in 2005, Sunshine Week is an opportunity to identify gaps in publicly available information.

Campaign finance disclosure has been repeatedly upheld by the US Supreme Court.

In 1978, a majority of the US Supreme Court justices in First National Bank of Boston v. Bellotti stressed how disclosure helps citizens evaluate credibility:

The US Supreme Court is poised to hear a major case about the disclosure of donors to nonprofits on April 26. Americans for Prosperity  v. Becerra and Thomas More Law Center v. Becerra were consolidated for oral arguments about whether California’s policy that requires the disclosure of top donors’ names and address violates the First Amendment.

#SunshineWeek: How The For The People Act Will Increase Transparency