Lenders Put Your Money to Work – for Themselves

Lenders Put Your Money to Work - for Themselves

If you’re wondering how special interests and high-dollar donors threaten the proper function of our democracy, the Consumer Financial Protection Bureau, (CFPB) is a pretty good place to start looking.

If you’re wondering how special interests and high-dollar donors threaten the proper function of our democracy, the Consumer Financial Protection Bureau, (CFPB) is a pretty good place to start looking.

Congress created the CFPB to regulate the financial industry and look out for borrowers following the industry’s collapse in 2008. The financial industry had expanded rapidly in the early 2000s, as banks offered mortgages and credit to people who could not afford to repay the money. That helped create an economic “bubble” that popped as borrowers defaulted on loans.

Now, Rep. Jeb Hensarling, R-TX, wants to again deregulate the industry under the guise of protecting the freedom of choice.

Hensarling’s Financial CHOICE Act of 2017 would remove the CFPB’s “supervisory authority over financial agencies” and make the CFPB directly subject to congressional budget authority. Specifically, this act would prevent the CFPB from establishing regulations for payday and title lenders, including rules that would make them more trustworthy and consumer-friendly. Under one provision of the act, payday and title lenders would not be held accountable for abusive practices.

Millions of Americans depend on payday loans to stay afloat financially. While they’re intended to be temporary solutions to financial problems, payday loans often end up creating cycles of compounding debt. Many of these borrowers make payments at interest rates approaching 400%. The CFPB reports that nearly 70% of payday loan borrowers take out a second loan to cover the first, and 20% wind up bogged down with 10 or more consecutive loans.

Some of Hensarling’s most generous campaign donors come from the financial and banking industry, including payday lenders. He received nearly $1.05 million in 2016 from individuals and groups connected to commercial banks, securities and investment institutions, insurance companies, finance and credit institutions, and other miscellaneous finance companies, according to campaign finance reports compiled by the Center for Responsive Politics.

The CHOICE Act’s congressional co-sponsors also have benefitted from financial industry support.. Of the 40 cosponsors who have signed on since the act’s introduction, at least 37 raked in more than $15,000 for their 2016 campaigns from financial and banking industry donors. 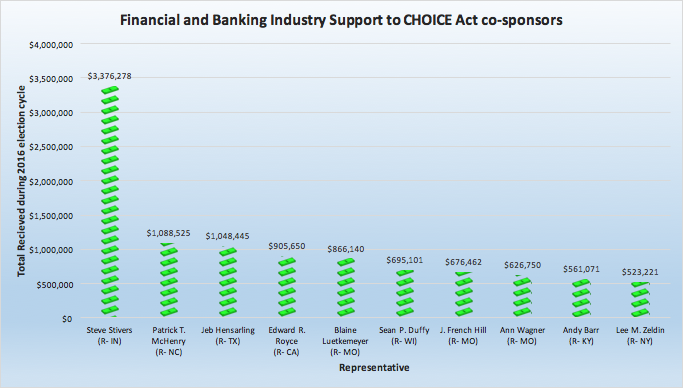 The top recipient was Rep. Steve Stivers, R- OH, whose campaign collected more than $3.3 million. Two of the top contributors to his 2016 campaign were banks: Huntington Bancshares ($140,700) and JP Morgan ($96,600). Stivers received an additional $33,000 from payday loan companies, more than they gave to all but six other lawmakers.

The industry outlays call into question who our representatives truly represent. Their decisions to cosponsor the Financial CHOICE Act may be linked to the contributions they received from the financial and banking industry. Deregulating the financial industry will make it easier for families to be saddled with high-interest debt. Shrinking the oversight and enforcement authority of the CFPB is a political move that will benefit banks and payday lenders at the public’s expense.

The numbers illustrate the influence big money can have on our political system. Our representatives seem to be responding to the interests of their funders instead of their constituents. We need our representatives to be accountable to the people, not the industries that fund their campaigns.