Kellyanne Conway is breaking the law. She doesn't care. She works for someone who believes he's above the law, surely that means she is too. 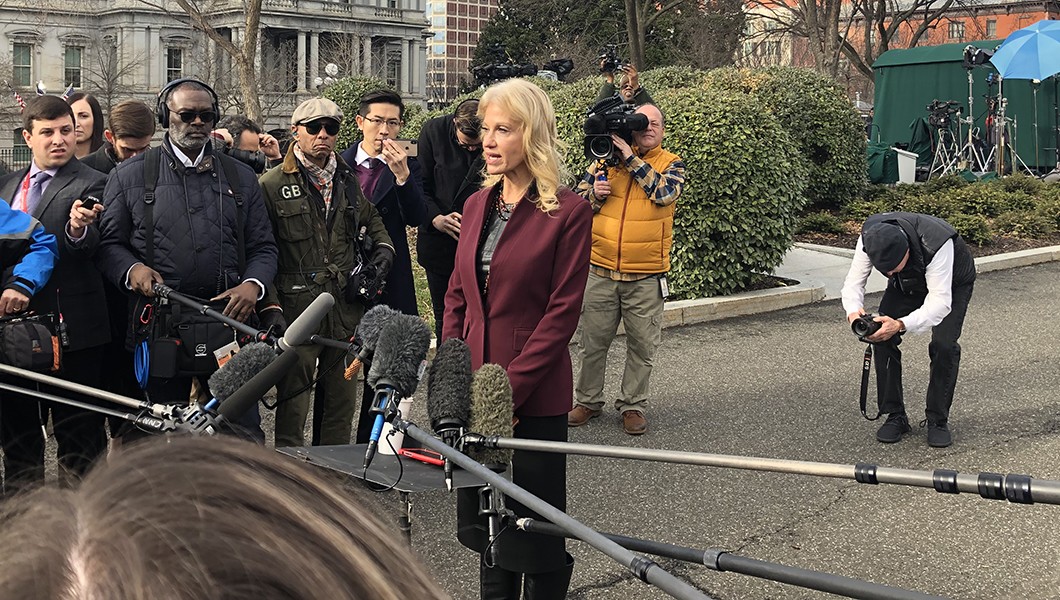 Speaking in front of the White House on Tuesday and Wednesday, Kellyanne Conway, counselor to President Trump, used her platform to stump for the president while attacking Democratic candidate Joe Biden on the driveway of the White House. In her remarks yesterday, she characterized her performance as a “free commercial about all the things Joe Biden didn’t get done for the eight years he was vice president.” As MSNBC commentator Lawrence O’Donnell explains, Ms. Conway is electioneering at a federal building on the taxpayers’ dime: an “illegal commercial” in violation of the Hatch Act.

Ms. Conway is hardly the first public official to commit such an offense but is remarkable for her apparent impunity. President Franklin Roosevelt signed the Hatch Act into law in 1939 after a widespread allegation that he had employed the Works Progress Administration (WPA) to benefit him in the 1938 midterm elections. The statute tasks the independent Office of Special Counsel (OSC) with safeguarding against the political exploitation of federal offices. While running afoul of this guideline does not constitute a crime, even low-level public employees (including a Postal Service worker) have been dismissed for Hatch Act violations. That Ms. Conway’s remarks did not result in her immediate firing illustrates the comfort with which the Trump administration and its allies selectively enforce the law.

This is not even the only instance Ms. Conway has found herself flirting with — and then definitively crossing — the line that separates her official role and the Trump campaign. Last October, nonpartisan watchdog group Citizens for Responsibility and Ethics in Washington (CREW) filed a complaint to the OSC on the grounds that Ms. Conway tweeted official campaign slogans and retweeted statements from RNC Chairwoman Ronna McDaniel. Earlier last year, the OSC actually found Ms. Conway in violation for two incidents in which she encouraged residents of Alabama to vote for Republican candidate Roy Moore in the state’s special Senate election.

Even as Trump’s inner circle have run rampant over this law, however, the Hatch Act’s reach expanded over career public employees. A memo issued by the OSC last November discourages federal workers from discussing the president’s impeachment or even the anti-Trump “resistance,” while at work, arguing that the latter had become “inextricably linked with the electoral success (or failure) of the president.” Such a broad interpretation of the law conflates potential criticism of the president on a wide range of issues with express campaigning. Legal experts have questioned the sweeping scope of this directive, especially given that the presidential election would not happen for another two years following the memo.

The double standard between the rule-followers executing the day-to-day work of the government and the rule-enforcers at the corner offices of the West Wing could not be clearer. Trump turns a blind eye to the transgressions of his kingpins, receiving their unwavering support in return, while simultaneously brandishing the law against everyday Americans. This creates a dangerous imbalance in our country, where the wealthy and powerful abide by a different code of conduct from those whom they are supposed to serve.