Earlier this week, I wrote about the judicial ethics problems plaguing The Federalist Society’s annual black-tie dinner, which took place Thursday night. It had all of the trappings of a classic Washington fundraiser — big-name corporate sponsors underwriting the costs for more than 1,300 guests, and tickets at $200 a pop. The headliners were Supreme Court Justice Clarence Thomas and Seventh Circuit Court of Appeals Judge Diane Sykes. That’s why Common Cause joined with Congresswoman Louise Slaughter and the Alliance for Justice to send a letter of complaint about Thomas’ participation to the Supreme Court, and a formal complaint for judicial misconduct against Sykes to the Seventh Circuit.

Because judges have every right to participate in legal forums and seminars — indeed it’s a good idea — the critical ethical question is whether Thursday’s dinner was a fundraiser. There’s overwhelming evidence that the answer is a resounding “yes.” Here’s why:

The program booklet includes prominent recognition of the dinner’s corporate sponsors, stating that “The Federalist Society gratefully acknowledges the following firms and corporations for their generous support of the 2013 Annual Dinner.” There was a lengthy list of “gold,” “silver” and “bronze sponsors.” “Gold” sponsors included Chevron, Google, and Verizon. “Silver sponsors” included Facebook and Time Warner, plus 24 law firms.

(All of those corporations also supported The Federalist Society in 2012, according to its Annual Report. Chevron gave at least $50,000 in 2012, while Google and Verizon each donated at least $25,000 and Facebook and Time Warner gave at least $10,000.) 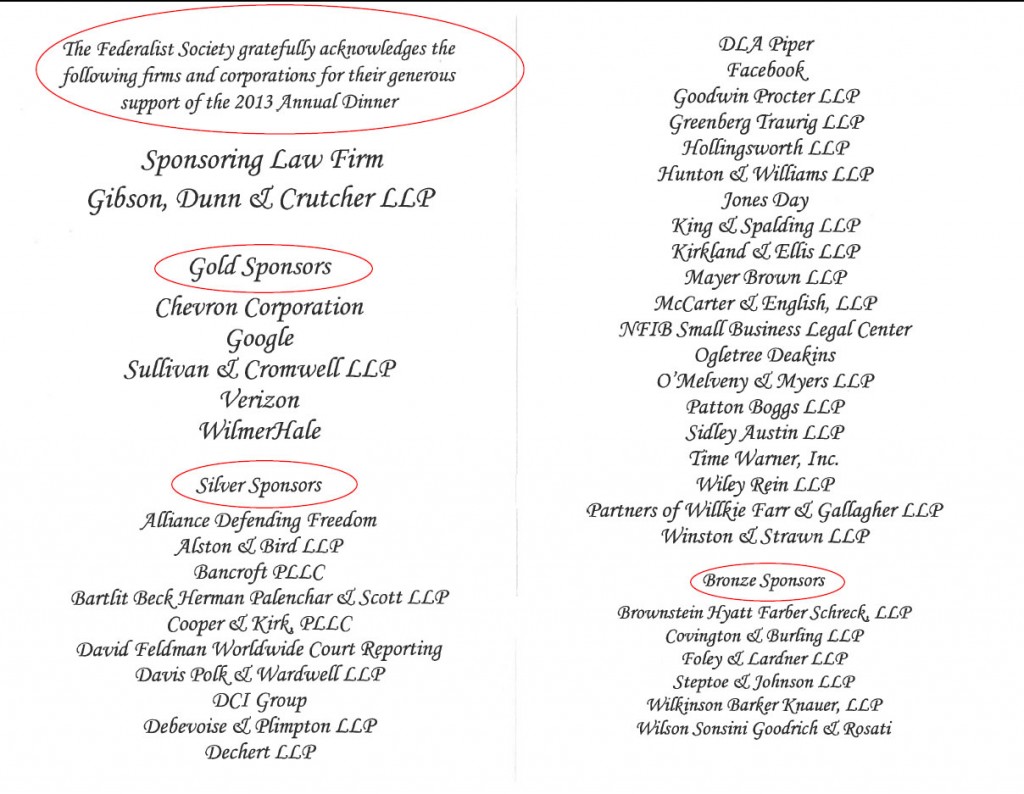 A Very Special Place at the Table

The Federalist Dinner was engineered to cultivate donors and reward them for their financial support. The larger the gift, the better one’s place at the table. Literally.

Justice Samuel Alito presided over Table 6, where his dinner partners included Michael Gleba, president of the Sarah Scaife Foundation, also a “Madison Club Platinum” donor of $100,000 or more according to the 2012 Annual Report. Scaife’s 2012 Form 990 reports that it gave $325,000 to the Federalist Society last year.

The message is clear: a big gift to the Federalist Society buys you a chance to sup and hobnob with a member of the Supreme Court.

So what’s the big deal?

Speaking and being featured on the program of a fundraising dinner violates the Code of Conduct for United States Judges. Members of the judiciary — sworn arbiters of impartial justice — should not be featured as speakers at fundraisers that advance the private interests of their sponsors.

The Federalist Society describes itself as “a conservative and libertarian intellectual network that extends to all levels of the legal community.” The Society press packed distributed to journalists on Thursday included the Society’s 2012 Annual Report along with several copies of relevant articles about the group’s work. One, titled “A Federalist Solution: How Donors Are Working To Replicate the Federalist Society”, quotes former Vice President Dick Cheney as stating that “[a]gainst great odds, the Federalist Society has become one of the most influential in the world of law and public policy.” Another, titled “How Conservatives Captured the Law,” explained that membership “has become a passport to professional advancement” in conservative legal circles, and that the society “not only has powerful litigators but also dominates the judiciary.”

Again, it’s important to remember that there is no ethical lapse when Justices of the Supreme Court appear before legal organizations like the Federalist Society at panels and conferences, irrespective of the organization’s ideological bent. But when it’s a fundraiser — that crosses a line.

That’s why it’s all the more imperative that Congress pass the Supreme Court Ethics Act of 2013, to require the Supreme Court to abide by a transparent Code of Conduct. It will strengthen confidence in this critical branch of government and our democracy.