In this monthly newsletter, Common Cause will provide periodic updates on the goofy politics that allow this anachronism to survive and the grassroots campaigns, legislative efforts, and litigation that are allowing citizens to fight back and make their voices heard.

Welcome to the first edition of Gerrymander Gazette. When the term gerrymandering was first introduced into our popular lexicon in 1812, bloodletting was a state-of-the-art medical procedure, indoor plumbing was infrequent, and traveling across the United States took a couple of months. Germ theory and anesthesia have made medical science less terrifying, the widespread use of indoor plumbing has made our homes less disgusting, and airplanes have made cross-country travel a lot simpler. Despite the progress society has made in other areas of our lives, gerrymandering has demonstrated a cockroach-like tenacity to survive more than two centuries of democracy reforms.

In this newsletter, Common Cause will provide periodic updates on the goofy politics that allow this anachronism to survive and the grassroots campaigns, legislative efforts, and litigation that are allowing citizens to fight back and make their voices heard. Common Cause state organizations and our many allies are actively fighting to end gerrymandering by banning the drawing of districts for political advantage, giving impartial entities the power to draw districts, mandating clear and nonpartisan standards, increasing public participation, requiring greater transparency, and supporting alternative voting methods. We hope to make the Gerrymander Gazette a one-stop shop for tracking what is happening around the country in the fight for fair representation. Please feel free to send any news to dvicuna@commoncause.org.

With a federal court ordering a redraw of North Carolina’s congressional map and renewed efforts in several states to push legislation for fair and transparent redistricting, here’s what’s happening:

In a blockbuster decision, a three-judge federal district court panel has ruled that the North Carolina General Assembly must redraw the state’s congressional map after finding that the 1st and 12th Congressional Districts constitute an illegal racial gerrymander. Aesthetics aren’t everything when it comes to drawing districts, but these do seem a bit manipulated.

The court has required the legislature to draw a new congressional map by February 19. Gov. Pat McCrory and other state officials asked the three-judge court to stay its decision pending an appeal to the U.S. Supreme Court, but the panel refused to do so. North Carolina filed an emergency stay request with Chief Justice John Roberts. 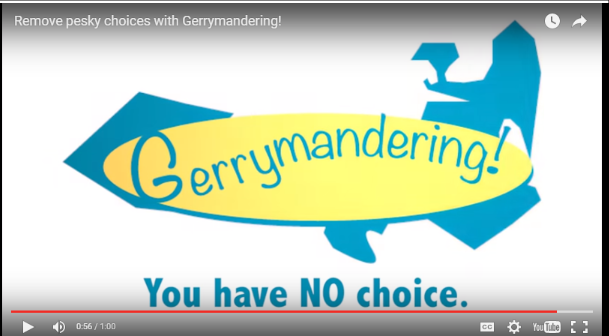 • In a speech to the Illinois General Assembly on the anniversary of the announcement of his first presidential run, President Obama called for an end to congressional gerrymandering. From the speech: “And once the next census rolls around and we have the most up-to-date picture of America’s population, we should change the way our districts are drawn.  In America, politicians should not pick their voters; voters should pick their politicians. And this needs to be done across the nation, not just in a select few states.  It should be done everywhere.” Fun fact: in one of Illinois’s most amazing political coincidences, then-State Senator Barack Obama’s house was surgically removed from a congressional district right after he unsuccessfully challenged an incumbent Member of Congress in 2000.

• Academics and students: do you like money, being published, and free travel? There are six weeks to go before the deadline for Common Cause’s First Amendment Gerrymander Standard competition. Papers are due on Sunday, March 27. We are seeking papers that make a strong argument that political gerrymanders violate the First Amendment of the U.S. Constitution. Go to www.commoncause.org/gerrymanderstandard for details.

• U.S. Sen. Tom Udall (D-N.M.) proposed a bill to create in every state a five-person citizen redistricting commission that would draw congressional districts after each census. The commissions would consist of two Democrats, two Republicans, and one chairperson unaffiliated with either party.  The leaders of both major parties in each legislative house would each appoint one commissioner and those four commissioners would choose a fifth person to chair the commission. The bill bans the use of several different kinds of political information, such as effect on incumbents, and requires the commission to draw districts based on specified neutral criteria.

Arizona: Nostalgia of the worst kind appears to have overtaken the Arizona State Legislature’s House Committee on Elections. Longing for the bad old days when Arizona’s legislative districts were gerrymandered to maximize political advantage, the committee approved HCR 2009. This bill would radically alter the Arizona Independent Redistricting Commission, a bipartisan citizen commission that Arizona voters tasked with drawing congressional and state legislative districts in a 2000 ballot initiative. HCR 2009 would make the five commissioners run for a spot on the commission like any other elected official and would eliminate the strong conflict of interest provisions that protect against the appointment of a commissioner with a personal stake in the drawing of districts, such as a lobbyist or party official. The bill would also allow all five commissioners to come from the same party, which probably won’t work out well for the other party.

Florida: The end is near! After the 2010 census, the Florida legislature engaged in business as usual and drew congressional and State Senate districts to allow one-party dominance of the political process. However, business as usual is no longer legal because voters passed the Fair Districts Amendments in 2010 to add a ban on political gerrymandering to the Florida Constitution. Years of litigation followed in which the legislature attempted to defend their unlawful maps in lawsuits brought by Fair Districts Now coalition plaintiffs Common Cause and League of Women Voters of Florida. Both cases have finally ended in total victory for the plaintiffs with courts selecting replacement maps that plaintiffs submitted. The only remaining hurdle is a federal court challenge to the new congressional districts by U.S. Rep. Corrine Brown, which a court will hear on March 25.

Maryland: Gov. Larry Hogan proposed legislation that would address the problem of gerrymandering in a state that has perfected the art. The Washington Post stated that Maryland is tied with North Carolina for America’s most gerrymandered state. This proposal closely follows the advice of the bipartisan Maryland Redistricting Reform Commission. It creates a nine-person redistricting commission consisting of three Democrats, three Republicans, and three people unaffiliated with either party. The General Assembly may veto maps, but the proposal empowers a Maryland court to draw districts if the legislature vetoes a second map. An explicit prohibition against drawing lines for political advantage, conflict of interest protections, and criteria for drawing maps provide strong protections against the gerrymandering that has plagued Maryland politics. Several legislators have also introduced bills and we expect a serious debate moving forward.

Nebraska: A bipartisan pair of state senators have finalized a redistricting reform bill. It would allow a nonpartisan legislative research office to draw state legislative and congressional districts that a nine-person citizen commission could then recommend to the Nebraska Unicameral Legislature. Although it would allow a 5-4 majority of seats to go to the party that won the most recent gubernatorial election, it prohibits current elected officials from sitting on the commission.

New Mexico: While undoubtedly throwing a curious and disapproving glance toward its legislator neighbors in Arizona, the New Mexico House Government, Elections and Indian Affairs Committee took a step toward redistricting reform. The panel unanimously approved HJR 1, a proposal that would create a five-person independent citizen redistricting commission to draw congressional and state legislative districts. The bill still has several hurdles to overcome during the state’s 30-day legislative session before it can be sent to voters in November, but supporters are off to a good start.

New York: Following a court-ordered use of cumulative voting, the Village of Port Chester, New York elected its first Latino member of the Board of Trustees. A federal judge ordered the remedy after determining that Latino voters were not being fairly represented under the existing at-large system. Port Chester had never elected a Latino trustee despite the fact that half of the population and one-quarter of the voters are Latino.

Ohio: A committee of the Ohio Constitutional Modernization Commission is considering whether to recommend to the full commission a proposal that would reform how congressional districts are drawn. The proposal would implement the same protections against partisan dominance of the process that voters approved overwhelmingly last November for the drawing of General Assembly districts when they passed Issue 1. The committee leadership has created a subcommittee to work out some areas of disagreement, which has caused a delay.

Pennsylvania: Common Cause is leading a broad and diverse coalition to announce the formation of the Fair Districts PA coalition. It launched the FairDistrictsPA.com website and has officially unveiled its guiding principles and founding members.  Meanwhile CC/PA has been catalyzing and advising a bipartisan bicameral team of lawmakers to shepherd CC/PA developed constitutional amendment legislation for California-style redistricting reform through the General Assembly.

Virginia: The U.S. Supreme Court will hear arguments over the constitutionality of Virginia’s 3rd Congressional District on March 21. Last month, a three-judge federal district court panel approved a new map after determining that the current map was an illegal racial gerrymander. A group of current and former members of Congress appealing the three-judge panel’s decision sought to prevent implementation of the new map pending the Supreme Court proceedings, but the high court denied that request. While other legislators may have been chastened by a court-sanctioned rebuke of their work, the Virginia House of Delegates was undeterred. A House of Delegates subcommittee rejected legislation that would have turned over the power to draw districts to an independent commission.

This newsletter has been produced by Common Cause and compiled by Dan Vicuna. For more information or to pass along news, contact Dan at dvicuna@commoncause.org.

Washington's Wisdom: Advice to the Senate on the Supreme Court Vacancy from a Real Originalist