Legislators’ revenge in Arizona and New Jersey, an invitation to sue in North Carolina, and great progress on reform in Illinois and Virginia make it clear that this will not be a quiet summer on the redistricting front. Let’s see how things are looking.

Legislators’ revenge in Arizona and New Jersey, an invitation to sue in North Carolina, and great progress on reform in Illinois and Virginia make it clear that this will not be a quiet summer on the redistricting front. Let’s see how things are looking.

Independent Maps has all the signatures they need to put fair and impartial redistricting on the ballot in Illinois this November. Last month, the organization delivered 570,000 signatures in a single 35-foot binder, as required by state law, to the Illinois Board of Elections. There is no word on whether Illinois election statutes also require the inclusion of a TPS report and cover sheet. The goal of this bipartisan effort is to create an independent citizens commission to draw Illinois General Assembly districts. Last week, the board announced that enough of the signatures were validated in a randomized test to place the measure on the November election ballot. 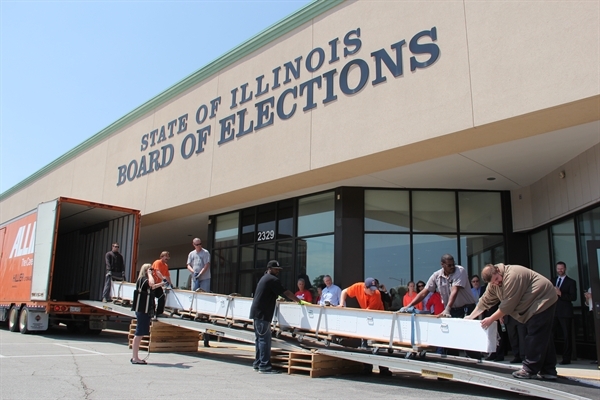 570,000 signatures head to Illinois Board of Elections

Arizona’s political leaders have maintained an impressive streak of futility when trying to wrest the power to draw legislative districts back from the Arizona Independent Redistricting Commission (AIRC). Arizona voters created the AIRC by ballot initiative in 2000 to empower citizens to draw districts based on neutral criteria instead of allowing legislators to draw them for political advantage. Here’s how the politicians’ efforts have gone so far:

• Last month, a challenge to the state legislative districts the AIRC drew suffered a unanimous loss in the U.S. Supreme Court.

So what’s left to do? Gutting the AIRC’s budget so they don’t have the money to litigate is a pretty good start. According to Arizona’s Politics, the AIRC asked the Legislature to carry over $695,000 that it did not spend last year to cover upcoming legal costs in yet another lawsuit. As AIRC’s Deputy Executive Director Kristina Gomez said: “The Legislature said no. They were not rude, they just did not do it.” Leach v. Arizona Independent Redistricting Commission, a state court challenge of Arizona’s congressional map, has already cost taxpayers $1.5 million. The $1.1 million included in the total AIRC budget will fall well short of what is required to once again defend the districts. The AIRC appears to have options, such as asking the court to order the legislature to cover the costs, but we will have to wait and see.

While holding their noses, a federal court upheld congressional districts the North Carolina General Assembly drew to replace an unlawful map. The General Assembly redrew congressional boundaries after the court ruled that the state’s previous map was an illegal racial gerrymander. Republican members of the legislature very subtly implied that they might possibly consider drawing replacement districts for political advantage, stating, “I acknowledge freely that this would be a political gerrymander” and “I’m making clear that our intent is to use the political data we have to our partisan advantage.” In its decision, the court wrote that its “hands appear to be tied” because the plaintiffs did not provide a judicially manageable standard for measuring a partisan gerrymander. The court practically begged for a challenge of the districts based on such a standard while noting – twice and with underlines – that the decision “does not constitute or imply an endorsement of, or foreclose any additional challenges to, the Contingent Congressional Plan.”

SCOTUS to Virginia Congressmen Seeking to Save Racial Gerrymander: Nope

The court-drawn Virginia congressional map that replaced an illegal racial gerrymander drawn by legislators will be in place for this year’s elections despite the efforts of three Virginia members of Congress who are nervous about their reelection prospects. A lower court previously determined that the Virginia General Assembly unlawfully limited the political power of black voters by packing them into one congressional district. That panel ordered the congressional map redrawn and asked a political scientist to do the job.  The U.S. Supreme Court ruled unanimously that the congressmen appealing that decision lack legal standing – the right to sue – to reinstate the old map. The Supreme Court noted in its rejection of the lawsuit that parties like the congressmen who are seeking the court’s involvement in a case “cannot simply allege a nonobvious harm, without more,” and that, in this case, “there is no ‘more.’”

During the last legislative session, New Jersey Democrats devised a cynical plan to lock in their political control of the legislature through a change in redistricting rules. They proposed a curious definition of “competitiveness” in the drawing of state legislative districts that would allow a slew of those districts to be tilted strongly in their favor. The idea was pretty terrible, but at least it also created a new redistricting commission and prohibited legislators from serving on it. The uproar this proposal caused quickly resulted in its withdrawal.

Well, that proposal is back. Amazingly, legislators stripped away the one good thing about the old bill: the provision keeping legislators off of the redistricting commission. So now the Democratic majority is proposing to enshrine in the New Jersey Constitution a mathematical formula whose complexity is designed to obscure its primary objective: greater political control for themselves and fewer options for voters. The bill was sent to the Senate State Government, Wagering, Tourism & Historic Preservation Committee.

This newsletter has been produced by Common Cause and compiled by Dan Vicuna. For more information or to pass along news, contact Dan at dvicuna@commoncause.org. Sign up here to receive the Gerrymander Gazette in your inbox.

8 Justices is not Enough