Ohio: Sometimes It Just Takes a Gentle 200,000-Signature Nudge – Legislaure Puts Congressional Redistricting Reform on May Ballot
Thanks to the collection of more than 200,000 signatures to place a congressional redistricting reform proposal on the November ballot, the General  Assembly passed its own alternative proposal yesterday. Following furious 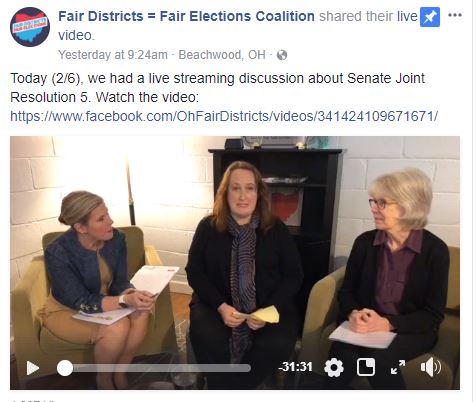 negotiations with Fair Districts = Fair Elections leaders, the General Assembly passed SJR 5 with the support of the Fair Districts coalition. The bill, which establishes strong protections against one-party control of congressional redistricting, will go before Ohio voters on May 8. Read the General Assembly’s proposal here. Signature gathering to place the Fair Districts = Fair Elections proposal on the November general election ballot will continue in case SJR 5 does not pass in May.

Pennsylvania: Philadelphians Celebrate in the Streets in Anticipation of New Congressional Map (We Assume That’s Why)

The decision made Pennsylvania state Senate president pro tempore Joe Scarnati so mad that he decided the rule of law didn’t apply to him, and rejected the court’s order for data its special master needs to draw a new map. However, Scarnati has a close competitor for “most unhinged response to the ruling.” State Rep. Cris Dush is seeking sponsors for a bill to impeach the Pennsylvania Supreme Court justices who voted to strike down the congressional map.

The next step requires the legislature to produce a newly drawn map by February 9 and receive approval from Governor Tom Wolf by February 15. If neither performs their duty and completes the task, the Supreme Court of Pennsylvania will produce a map by February 19 in time for the 2018 election cycle.

Last week, bipartisan and nonpartisan individuals and organizations filed amicus briefs in support of the plaintiffs challenging a blatant partisan gerrymander of the congressional map by Maryland Democrats. The Supreme Court will hear oral arguments in Benisek v. Lamone on March 28. The Court’s decision to hear this casecould signal that the justices are prepared for historic action on partisan gerrymandering this term. In 2011, Maryland’s then-governor Martin O’Malley and Democrats in the legislature worked together to target Republican former U.S. Rep. Roscoe Bartlett for defeat by moving Republican voters out of the Sixth Congressional District and moving far-flung Democratic voters into it. The move worked – the Democratic candidate defeated Bartlett by 20 percentage points. Briefs in support of the plaintiffs include:

FiveThirtyEight recently concluded a six-part podcast series called The Gerrymandering Project. In it, the producers travel to states that have been ground zero in the fight for fair representation. In episode three on race and redistricting, students at North Carolina A&T, the largest HBCU in the country, discuss their campus being split in two in the drawing of the state’s congressional map. In episode five, we hear from Arnold Schwarzenegger, and then Common Cause’s own Kathay Feng triggers an adult language warning in her retelling of California’s successful effort to create an independent citizens redistricting commission.