The fight for redistricting reform is progressing in the courts, at the grassroots, and in the halls of government across America.

As usual, redistricting reform efforts continue in the courts, at the grassroots, and in the halls of government. Many thanks to senior census correspondent (Common Cause program associate) Keshia Morris for her contribution on the census citizenship question. Let’s dive in.
Benisek v. Lamone: Boy, Does Chief Justice Roberts Hate Hobby Farms
Last week the U.S. Supreme Court heard oral arguments in Benisek v. Lamone, a First Amendment challenge to Maryland Democrats’ partisan gerrymander of the state’s Sixth Congressional District that could have national consequences. Listen to a discussion of the case featuring Michael Kimberly, the attorney who argued it. Some of the justices indicated that evidence of partisan intent and success in flipping the district to Democratic contro 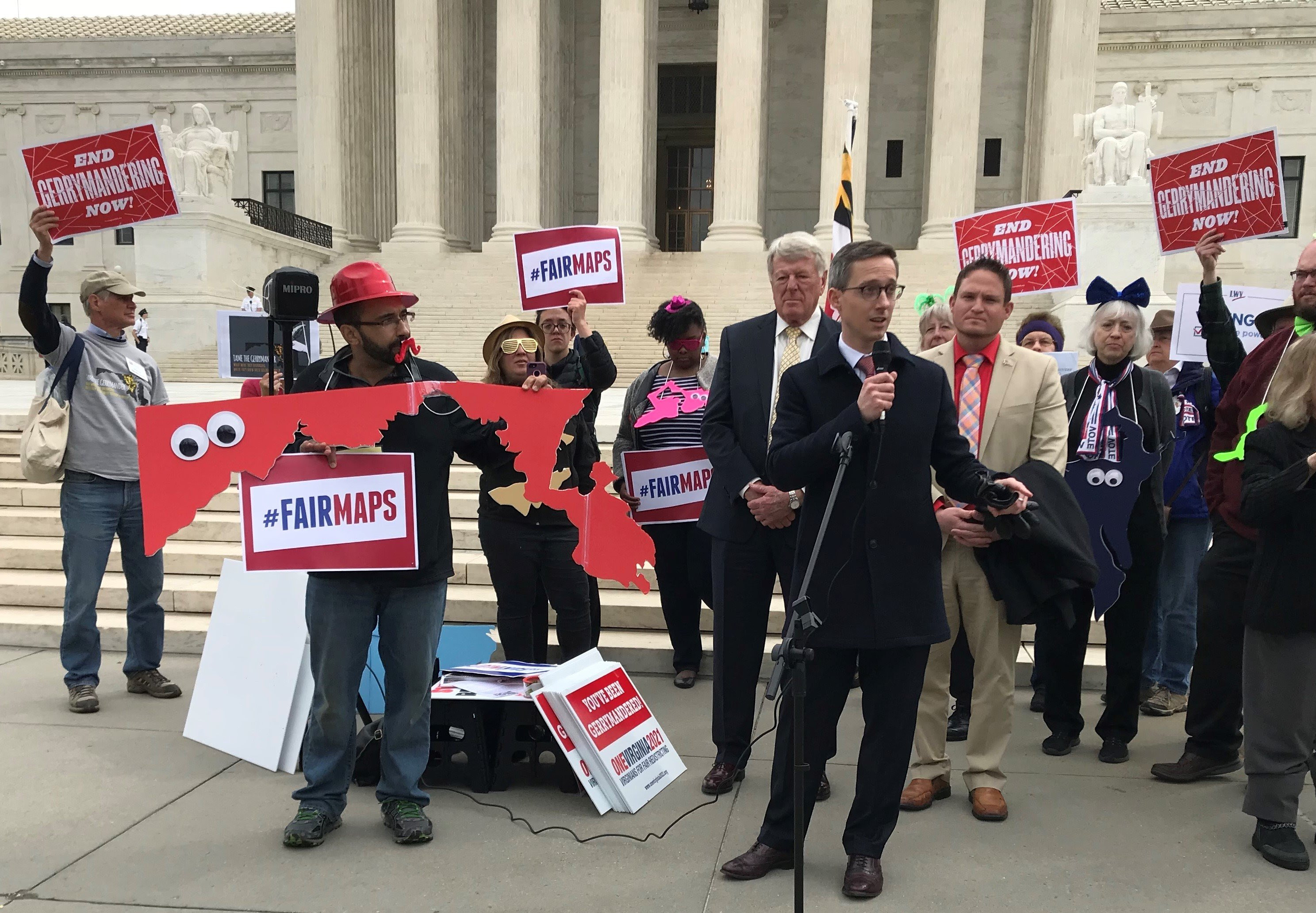 l was clear and unequivocal. Justice Kagan summarized the situation in Maryland: “from the Governor [Martin O’Malley], from Congressman [Steny] Hoyer, people were very upfront about what they were trying to do here, which was to create another Democratic district. And they did that.” Kagan also dismissed Maryland solicitor general Steven Sullivan’s argument that the Cook Report rates this district as competitive by citing that the Democratic candidate has won in three straight elections, including 2014, a year so good for Republicans that Roy Moore could have been elected public defender of San Francisco.

Chief Justice Roberts noted that the addition to the district of heavily Democratic suburbs of Washington such as the city of Potomac “doesn’t seem to have any internal logic.” Roberts then threw some shade at “hobby farms” to make the point: “I mean, part of the issue here is you have people from, you know, Potomac joined with people from the far west panhandle. I mean, they both have farms but the former, hobby farms. And the — any others — the others are real farms.” Burn!

In one curious moment, Justice Breyer suggested reargument of a mega-case that includes Gill v. Whitford, this Maryland case, and the consolidated North Carolina case of Common Cause v. Rucho and League of Women Voters of North Carolina v. Rucho. “What would you think of taking the three cases and setting them for reargument on the question of standard and there we’d have all three variations in front of us and we would enable people who have an interest in this subject generally to file briefs, and we’d see them all together and they could attack each other’s standards or they could support each other’s standards or they could attack any standard?” With future Supreme Court Justice [the last guy Donald Trump saw yelling on Fox & Friends] potentially joining the bench, it is unclear what the consequences of putting off the decision yet again might mean. If a reargument does not happen, we expect decisions in Gill v. Whitford and Benisek v. Lamone by the end of June.

Do You Believe in Miracles? Ohio Democrats and Republicans Agree on Redistricting Reform
The Ohio Republican Party joined the Ohio Democratic Party in endorsing Issue 1, a referendum on the May 8 ballot that would implement protections against one-party dominance of the congressional redistricting process. Legislators of both parties forged a compromise and put the measure on the ballot after the Fair Districts Ohio coalition exerted some friendly encouragement by collecting more than 200,000 signatures for a separate initiative. The coalition has focused much of its energy on passage of Issue 1, but will continue collecting signatures for the November Fair Districts proposal in case the May referendum fails.

Census Citizenship Question: The Trump Administration Finds Religion on Voting Rights? Nope
In December ‘17, President Trump’s Department of Justice wrote a letter to the Census Bureau requesting the addition of a citizenship question on the census survey. The stated reason for this might surprise you. They say it would help the administration fully enforce Section 2 of the Voting Rights Act. This is a curious position for a Department of Justice led by a man who called the Supreme Court’s gutting of the Voting Rights Act “good news” for the South and an administration that advocated for the placement of Secret Service agents at the polls and falsely claimed that millions voted illegally in 2016. Since that December request, the Census Bureau provided evidence of disparate response rates from minority and immigrant communities to the citizenship question, but the Commerce Department decided that the evidence was inconclusive. Dismissing concerns raised by senior officials from the George W. Bush and Barack Obama administrations, Secretary Ross decided to upend 50 years of Census Bureau best practices.

The NAACP, California, New York along with 16 other states and six cities have all filed lawsuits alleging that the 2020 Census will massively undercount people of color. California was the first out of the gate after Secretary Ross’ announcement, stating the addition of a citizenship question is not just a bad idea – it’s illegal. New York then followed with a multi-state lawsuit. Both lawsuits are alleging similar claims: that the citizenship question interferes with the “actual Enumeration” clause of the Constitution and that the decision to add a question about citizenship violates the Administrative Procedures Act which prohibits federal agency action that is “arbitrary [and] capricious.” The NAACP’s lawsuit is also asserting that the 2020 Census will undercount African Americans and people of color, but does not name the citizenship question specifically.

Rocky Mountain Compromise: Backers of Separate Redistricting Reform Measures to Jointly Support New Proposals
After months of negotiations, People Not Politicians and Fair Districts Colorado jointly drafted ballot initiatives to reform how congressional and state legislative districts are drawn in Colorado following each census. Read the initiative for congressional districts and the initiative for state legislative districts. Each organization originally drafted separate measures for each type of district, but attempted to consolidate their proposals into just one measure for congressional districts and one measure for legislative districts to avoid conflicting initiatives on the November ballot. The joint proposals would create one 12-person independent redistricting commission for congressional districts and a separate 12-person commission for state legislative districts. Each commission will have four Democrats, four Republicans, and four individuals who are not affiliated with either major party. Applicants will be screened for conflicts of interest and will be required to draw districts using neutral criteria that make political manipulation of the process very difficult. The measures will be up for review and comment today, and then will have to be filed with Title Board by Friday.  The Title Board hearing will take place on April 18.

WATCH: A Computer Scientist Makes the Case for Paper Ballots