Disinformation Watch: Politicians Are Lying About the For the People Act

As we work to pass the For the People Act through the Senate, our opponents are going all out to spread lies about this important voting rights, campaign finance, and ethics bill.

As we work to pass the For the People Act through the Senate, our opponents are going all out to spread lies about this important voting rights, campaign finance, and ethics bill. And they’re counting on a total lack of accountability from major tech platforms so they can get away with this disinformation campaign.

The Senate will vote on the For the People Act later this June, and false narratives about the bill have spread like wildfire on social media, poisoning the public debate and Congress’s deliberations. Opponents deploy former President Trump’s conspiracy theory about a “stolen election” and allege, without evidence, that there is “widespread voter fraud” to gin up opposition to this overwhelmingly popular democracy bill.

Social media platforms such as Twitter and Facebook, despite repeated promises to “do better” at upholding truth in the civic process, are leaving up and amplifying false statements from highly-influential politicians — spreading the same dangerous falsehoods that led to the January 6th insurrection.

Unfortunately, the fact that these lies have been easily and repeatedly debunked doesn’t stop them. Just one example: Senator Ted Cruz tweeted that passing the For the People Act would allow “millions of illegal immigrants to be registered to vote and to no doubt cast votes.” 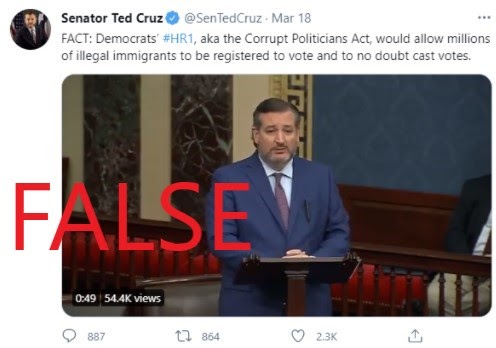 Sen. Cruz’s claim entirely is false. The For the People Act contains strong safeguards that will not allow any ineligible voters to register or vote.

When our team raised this to Twitter with fact-checks demonstrating that the material was false and should be flagged, Twitter’s response was that “the Civic Integrity Policy addresses mis and disinformation that would undermine confidence or deter participation in elections (and the Census)” as their reason for leaving the post up to be seen by hundreds of thousands. Instead, they offered to escalate it and submit it to Birdwatch, a program for Twitter fact-checking that has already been overtaken and exploited by disinformation agents.

But Twitter hasn’t been consistent here — they actually took stronger action and removed a tweet from Heritage Action that made the same false claim. 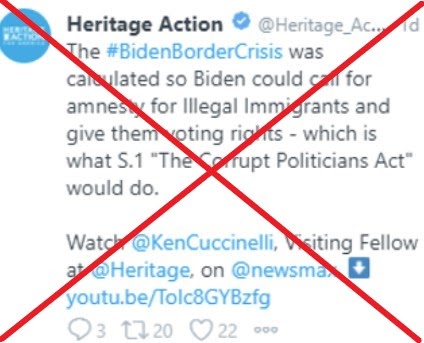 Twitter has not provided any transparency as to why they removed Heritage Action’s post but let Sen. Cruz’s stay up. One key difference: Sen. Ted Cruz has a much larger online audience than Heritage Action — and he has also repeatedly claimed, incorrectly, that social media platforms are “biased” against conservative voices.

Other high-profile Republicans, such as freshman Rep. Madison Cawthorn (R-NC), post easily debunked lies about the For the People Act that push the myth of a “stolen” 2020 election. Twitter policy forbids posting “misleading claims that cause confusion about the established laws, regulations, procedures, and methods of a civic process, or about the actions of officials or entities executing those civic processes.” However, Cawthorn’s post intimating that the 2020 results were fraudulent and an “unconstitutional power grab” remains visible to tens of thousands of readers. 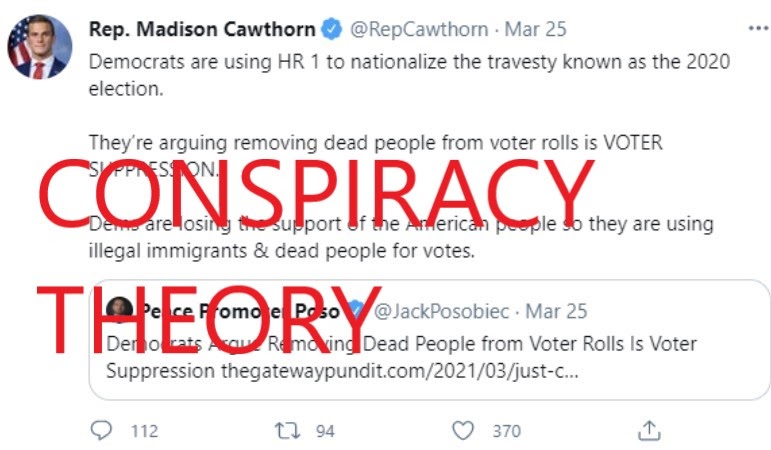 Sen. Tom Cotton (R-AR) also spreads easily-debunked lies about the For the People Act, claiming on Facebook that the bill will “use your tax dollars to fund campaigns you don’t like.” This is a deliberate misrepresentation of the For the People Act’s public financing provisions, which match and amplify small-dollar contributions from ordinary Americans with a “surcharge on criminal and civil penalties” — not tax dollars.  In addition, where these laws are in place, they shift power from lobbyists for wealthy special interests to the people, and that shift in priorities ends up saving taxpayers money. The Connecticut Citizens Election Program has more than paid for itself every year from just one bill that saves taxpayers more than $24 million per year.

We wanted to find out how egregious a politician’s lie about the For the People Act needed to be before platforms took action. Common Cause submitted 21 posts from elected officials ranging from vocal opposition to HR1 (not a violation) to Cawthorn’s overt claims that 2020 was an “unconstitutional power grab” and Cruz’s provably false and fearmongering statement above. Twitter told us that these were “statements of opinion” that they couldn’t do anything about — and later declared all 21 tweets — even factually wrong statements meant to undermine the integrity of our elections — in full compliance with their civic integrity policy. 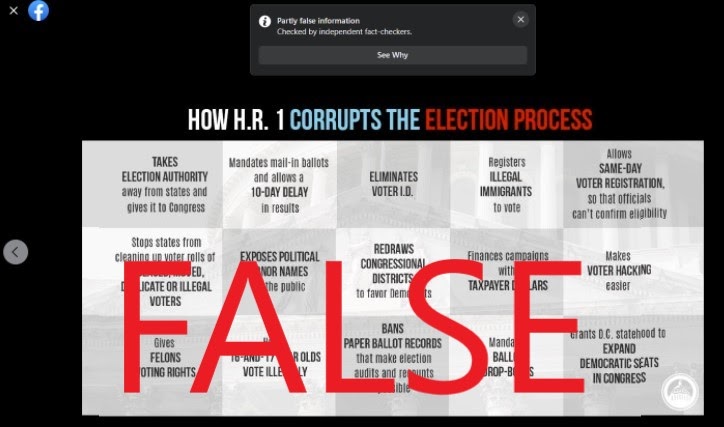 Facebook and Twitter are clearly applying their civic integrity policy with different standards for different users. Facebook has recently promised to make changes to their newsworthiness exception, which currently allows rule-breaking posts from public figures to stay up. Their new policy reads  “when we assess content for newsworthiness, we will not treat content posted by politicians any differently from content posted by anyone else.” It remains to be seen if platforms will follow their own policies and stated values — which will be necessary to prevent future outbreaks of political violence around Trump’s Big Lie.

Disinformation spreaders have a structural advantage that social media platforms have yet to reckon with. An explosive claim about a coming threat — even if it’s not true — will frequently go viral on social media. Accurate information — even when coming from a trusted source — rarely gets spread as widely as disinformation. For example, during the 2020 Iowa Democratic Caucuses, disinformation circulated claiming there were more registered voters in some counties than eligible voters — one tweet by far-right activist Charlie Kirk was retweeted over 26,000 times. Iowa’s Republican Secretary of State responded to debunk this false claim — but his fact-check received only 68 retweets. That means — thanks to Twitter’s inaction — false information about our elections was seen by thousands of times more people than the official correction was. We’ve observed a similar pattern on Facebook, where its top 10 shared posts every day are routinely dominated by right-wing sites that traffic in disinformation.

For our democracy to work, Americans of all political parties need to have faith in our civil servants, election administrators and even elected officials to put their country above their party. But the far-right’s deliberate strategy of election-related disinformation — pushing disproven lies about the integrity of the 2020 election and about reforms that help more eligible voters participate — eats away at our collective trust in our system of government. Social media platforms who refuse to act in the face of this threat — and continue amplifying lies that undermine our democracy to an audience of millions — are tacitly assisting in these shameful efforts.

The path forward to pass the For The People Act