Earth Day: 50 Years of Being In Common Cause With Our Environment

Earth Day and Common Cause turn 50 in 2020 and share more than an anniversary -- a deep and abiding commitment to public policy in the common good.

As we celebrate the 50th annual Earth Day today, we are reminded of Common Cause founder John Gardner’s commitment to environmental protection and holding big polluter interests accountable.

In January 1970, Gardner, the former U.S. Secretary of Health, Education, and Welfare, became a co-founder of Earth Day by donating office space to help U.S. Senator Gaylord Nelson plan the first annual Earth Day observance that April. A few months later, in August, Gardner launched a “citizens lobby” called Common Cause, “for those Americans who want to help in the rebuilding of the nation.” In his letter announcing the move, Gardner said many Americans are “shocked” about the issues like poverty and pollution, and called for “new solutions in housing, employment, education, health, consumer protection, environment, family planning, law enforcement, and the administration of justice.”

Following Gardner’s leadership, throughout the 1970s and 1980s Common Cause supported bills in Congress and federal rulemakings that strengthened clean water and clean air laws, regulated strip mining, promoted energy conservation, required corporations to disclose their environmental impact, encouraged the use of renewable energy, and called for a reorganized Department of Energy to limit the influence of fossil fuel lobbyists on policymaking.

Throughout Common Cause’s 50 year history, our commitment to a safe and healthy environment and holding powerful energy interests accountable has remained strong. In 2011, Common Cause released a report exposing the fracking industry’s political campaign to avoid regulation; we continue to call for more transparency in the fracking process, including the release of information about the harmful chemicals involved. Also in 2011, Common Cause members marched at BP’s headquarters in Washington, DC, protesting a nearly $10 billion tax refund BP was claiming to cover the costs of cleaning up the Gulf Coast following the Deepwater Horizon disaster.

In 2014, Common Cause co-sponsored and our members marched in the People’s Climate March in New York City, the largest climate march in history at that point. In the fall, we released a new report – “Silencing Science” – which exposed the special interests and big oil money that are funding politicians who deny the science of climate change. We also opposed the infamous 2014 omnibus federal spending bill – or “CRomnibus”– that included funding cuts to the EPA and we helped expose the special interest money behind the Keystone XL pipeline.

In 2015, we highlighted the story of a Hurricane Sandy victim in a new report, “Whose Government, Whose Voice?,” that explored the big money stopping progress on major national problems, including climate change, despite strong support for reform from the American people. That same year, Common Cause received legal threats from the American Legislative Exchange Council (ALEC), a corporate lobbying group that is angry because we’ve highlighted its efforts to question climate science and undercut legislation that would encourage the development of alternative energy sources. Because of our Common Cause’s work exposing ALEC’s climate denial agenda, numerous companies have cut ties with ALEC, including Google, Facebook, and ExxonMobil.

Our work protecting our democracy and commitment to a healthy planet has continued in recent years. We’ve launched a campaign to stop a dangerous Article V convention that could lead to repealing important environmental protection laws. We’ve watchdogged and held officials in the Trump administration who seek to undermine the laws and agencies protecting our climate accountable, including former EPA Administrator Scott Pruitt and former Secretary of the Interior Ryan Zinke. We’ve teamed up with environmental allies like the Sierra Club and Greenpeace USA to advocate for common-sense political reforms at the state and national level because we know in order to protect our planet, we must fix our democracy.

After 50 years of Earth Day observances, the link between the big money flowing into our elections and our political system and the pollutants flowing into our streams and skies is clearer than ever. To clean up our environment, we must first clean up our politics. Common Cause has been dedicated to that mission for 50 years and will be leading the way to protect everyone’s voice, vote, and planet in the next 50 years – and hopefully more. 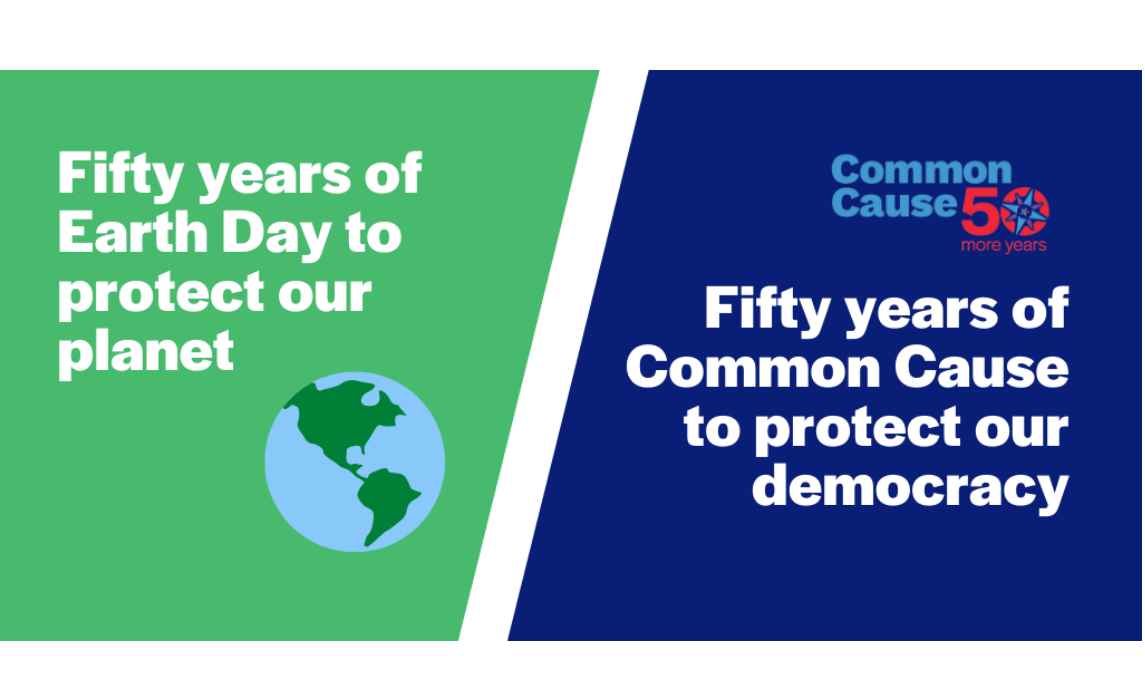