5 Things to Know about the Next Big Voting Rights Case

The U.S. Supreme Court will hear Moore v. Harper, a Common Cause NC case, this fall. The court's decision could upend elections and voting in the United States. 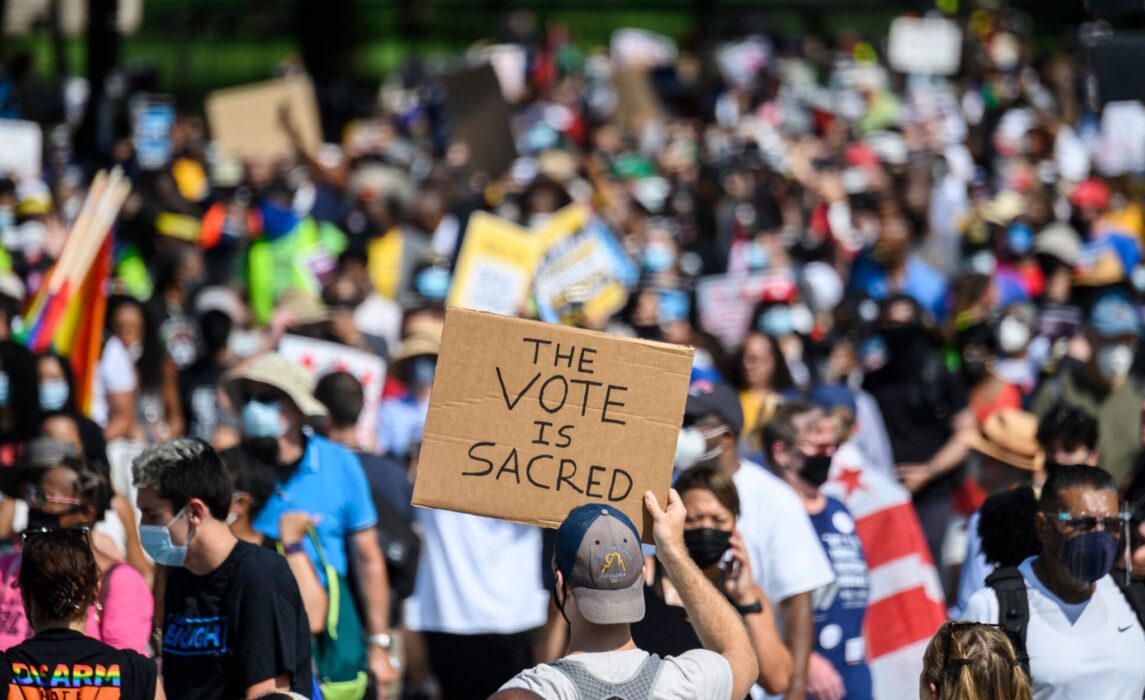 Protesters rally in 2021 to demand protection for voting rights on the 58th anniversary of the 1963 March on Washington for Jobs and Freedom. Photo by Andrew Caballero-Reynolds/ AFP via Getty Images.

The U.S. Supreme Court is prepared to hear Moore v. Harper later this year, an important case that could upend how elections are conducted across the country.

Here are five things to know about the upcoming U.S. Supreme Court case, the so-called “independent state legislature theory,” and how Common Cause is defending our rights for a free and fair democracy where every vote counts.

1.) There’s no historical basis. The “independence state legislature theory” would reverse decades of legal precedent by taking away the ability of state courts to review whether state lawmakers followed the law when it comes to setting election policies.  It’s akin to pulling the referee out of a game midway, and just hoping the players on the field stick to the rules.

The nation’s highest court, if it goes along with this long shot of a legal appeal, would also be contradicting itself. Just three years ago, in Rucho v. Common Cause, the Supreme Court pointed to state courts as the ones who should decide if partisan gerrymandering is permissible in the redistricting process. And in 2015, the Supreme Court ruled in an Arizona case that the court interpreted mention of “legislature” to include the entire legislative process, not just the state legislature itself.

2.) This decision could upend our nation’s election systems. U.S. Rep. Zoe Lofgren (D-Calif.) summed up the worst-case-scenario in a Congressional hearing about the “independent state legislature theory” held last week.

“Professional, nonpartisan election administration is a cornerstone of the modern American right to vote,” Lofgren said. “That entire apparatus could vanish overnight, at least for federal elections.”

Removing the ability of the state judiciary to review decisions regarding our federal elections, from voting maps to whether early voting hours should be extended or curtailed, will give partisan interests more ability to manipulate decisions to their liking.

Simply put, it would change how we’ve run elections in the United States for more than 200 years.

3.) Popular measures making it easier to vote are under threat. Did you vote by mail in a recent election? Or use the early voting period to cast your ballot at a time that was convenient? These voting methods have made it easier for many of us, including those of us from historically-disadvantaged groups of voters, to vote in larger numbers so we can be a government by, of, and for the people. But we could see these much-needed advances in some states get rolled back if state judges can no longer call out partisan schemes that intentionally or effectively disenfranchise voters.

4.) This could hurt Americans of all political leanings. There’s no clear advantage either of the two major political parties would have if this dangerous power grab theory sees the light of the day. In traditionally blue states, Democrats could enjoy unchecked power without worry of meddlesome courts, while the reverse would be the case in red states with Republican-led leaders.

On the losing side, however, will be voters seeking policies that serve the people, and not special interests.  Eliza Sweren-Becker of the Brennan Center summed this up in front of Congress last week, finding that “the independent state legislature theory is bad for Americans, no matter what side of the aisle you’re on.“

5.) Federal voting protections are needed. One big reason why this Supreme Court case could have such an unsettling effect is the inaction to date from Congress to pass federal elections standards. The John Lewis Voting Rights Advancement Act, named after the late Georgia Congressman and civil rights hero, would standardize voting rights across the nation and address the unjust, racist and anti-voter measures that have discouraged and disenfranchised voters in states with a history of discrimination.

This bill has gotten support in the U.S. House of Representatives but has yet to pass the U.S Senate. You can look up your representatives and senators here, if you agree with us at Common Cause that we can’t wait any longer for voting protections.

We at Common Cause believe the U.S. Supreme Court will see this desperate attempt to do away with our voting rights for what it is. Our legal team will be at the court later this year to defend a free and fair democracy where every vote counts.

What Should I Do When I See Disinformation?