The NRA has always been a big political spender, but since the U.S. Supreme Court allowed unlimited political spending by corporations and special interests groups in the 2010 Citizens United decision, the NRA’s spending on federal elections increased dramatically. 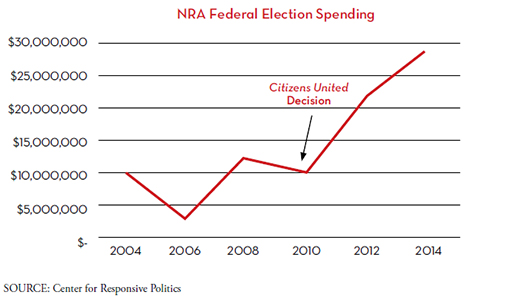 (2) Most of the NRA political spending is on “independent expenditures”

In the 2014 midterm elections, the NRA spent $29.2 million on congressional elections, but only 3% of that was direct contributions to candidates’ campaign committees. The NRA instead dedicated the vast majority of its political spending to so-called “independent expenditures,” where the NRA can spend unlimited money to fund ads for or against candidates. Nearly half of this spending is through the NRA’s nonprofit arm, which is not required to disclose its donors.

(3) The NRA receives funding from the Koch brothers’ donor network

In 2012, the NRA received $6.6 million from two groups controlled and funded by the Koch brothers: Freedom Partners and the Center to Protect Patient Rights. The pattern continued as Freedom Partners funneled $4.9 million to the NRA in 2014.

To protect its ability to spend unlimited amounts in elections, the NRA has taken a strong position against sensible campaign finance reforms. Most recently, the NRA lobbied against a proposed constitutional amendment to overturn Citizens United, warning members of Congress that they “will consider votes on this legislation in future candidate evaluations and notify our members accordingly.” In 2010, when Congress considered the DISCLOSE Act, which would require political secret-money nonprofits to disclose their donors, the NRA persuaded Congress to include a provision that would have exempted it from the bill’s requirements. A Senate filibuster ultimately killed the legislation.

Join Common Cause Chairman Robert Reich in asking that all members of Congress immediately return all campaign contributions from the NRA or other gun lobbying groups. Sign the petition now!