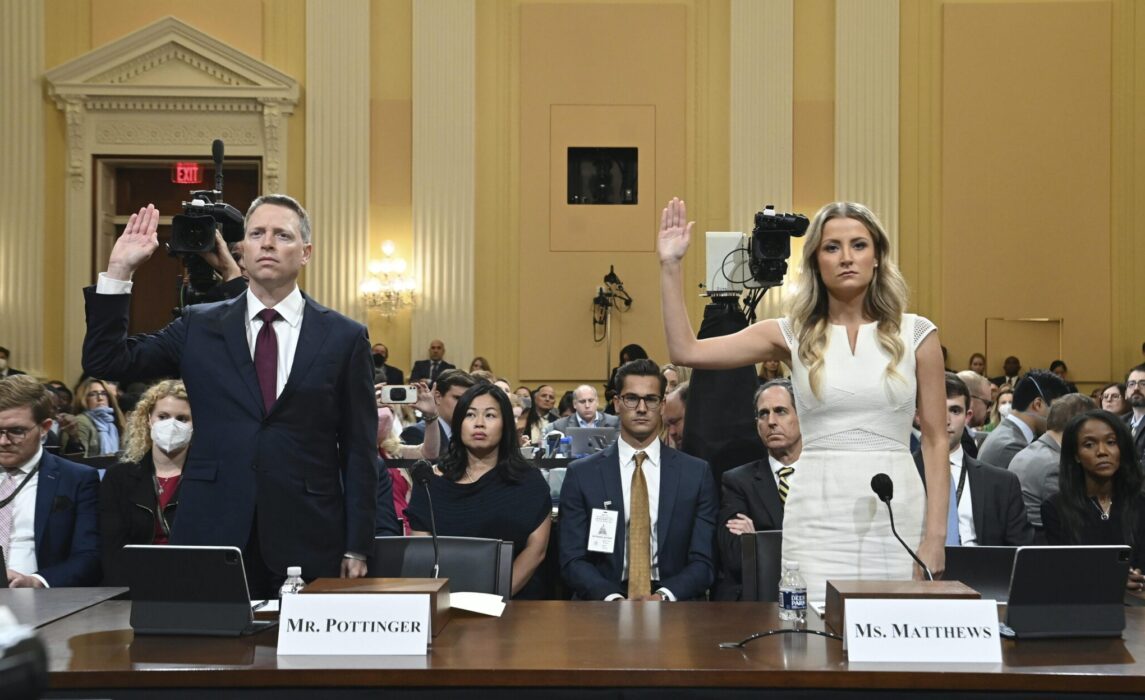 On Tuesday, July 21, the nonpartisan January 6 Committee held its eighth public hearing in primetime and on all major news networks, except Fox News.

What Happened: The Committee presented evidence showing how Donald Trump refused to prevent or stop the violent mob from attacking the U.S. Capitol for more than three hours. He objected to the desperate pleas from his own family and staff to call off the mob.

Two former Trump White House staffers testified before the committee to shed light on Trump’s inaction for more than three hours as his supporters violently sought to undue a democratic election.

Here are the biggest pieces of news we learned broken down by tweet for a quick and easy read:

1) Donald Trump learned the U.S. Capitol had been breached within 15 minutes of the attack. He chose to watch television.

Within 15 mins of leaving the stage, Trump was told Capitol was under attack, Luria says. Witnesses said Trump went to the WH dining room and was watching Fox News. But Luria says the WH call log was blank from 11:06am and 6:54p. And says the WH diary is blank from 1:21-4p

2) After the violent mob led a deadly attack at the U.S. Capitol, Donald Trump never placed a call to any law enforcement officials.

In response to the deposition query "are you aware of any phone call by the President of the United States to the Secretary of Defense that day?" former White House Counsel Pat Cipollone replied: "Not that I'm aware." #January6thCommitteeHearings

3) Trump’s only calls were to U.S. Senators, asking them to refuse to count the American people’s votes to elect Joe Biden President.

Rep. Elaine Luria says when Trump was in the dining room for more than 2.5 hours, Trump wasn't calling law enforcement or military leaders, instead, he was calling senators to encourage them to delay or object to the certification.

It's unclear which senators Trump called.

4) During the violent attack, Donald Trump’s family members and staff pleaded with him to issue a statement calling off the mob. Donald Trump refused.

Pat Cipollone testifies that he was joined by Ivanka Trump, Eric Herschmann, and Mark Meadows in wanting Pres. Trump to issue a stronger statement on January 6th. #January6thCommitteeHearing

5) During the attack, Vice President Pence’s security team feared for their lives and made phone calls to their family to say a final goodbye.

Mike Pence's Secret Service agents were calling family members to say goodbye. They were afraid that they were about to die at the hands of rioters Trump sent to the Capitol.

7) Two minutes later, Vice President Pence had to be evacuated a second time.

At 2:26, the Vice President had to be evacuated to safety a second time and came within 40 feet of the rioters.

McEnany told Matthews that Trump "didn't want to include any mention of peace in that tweet" ,… and "it wasn't until Ivanka suggested 'stay peaceful'" that Trump agreed

9) Donald Trump Jr. and Republican members of Congress urged Donald Trump’s Chief of Staff to get Trump to tell the MAGA mob to leave the U.S. Capitol. Trump still did not act.

Mark Meadows, then-President Trump’s chief of staff, was flooded with text messages on Jan. 6 urging him to get the president to make a statement denouncing the riot: "He's got to condemn this s— ASAP," Donald Trump Jr. texted. https://t.co/Z5Wa7jBU6r

10) Donald Trump’s staff prepared a speech for him to record to his supporters telling them to go home peacefully. He refused and instead lied about voter fraud.

The Jan. 6 panel showed a statement prepared for then-President Trump that said "I am asking you to leave the Capitol Hill region NOW and go home in a peaceful way."

11) After more than three hours of a bloody attack at the U.S. Capitol, Donald Trump finally recorded an unscripted video message to his supporters saying “I know how you feel.”

Kinzinger: Only after police turned the tide and began to repel the mob did Trump engage “in the political theater of telling the mob to go home”

12) At the end of the day, Donald Trump remained upset that Mike Pence would not go along with his illegal scheme to overturn the results of the lawful 2020 election.

.@RepKinzinger says Trump spoke to a WH employee as he left the West Wing on Jan. 6: "Mike Pence let me down," Trump said.

13) Undeterred by the bloody attack that day, Rudy Giuliani made phone calls to members of Congress, pressuring them to refuse to certify the 2020 election.

Trump's lawyer Rudy Giuliani continued to call senators to delay the counting of electoral votes after the attack at the Capitol.

He did not mention the attack. pic.twitter.com/vhxa6gKF3a

14) And Donald Trump publicly endorsed political violence as means to declare victory in an election in the United States.

At the end of Jan 6th, Donald Trump endorsed the violence as a natural course of action: pic.twitter.com/zn6xNrW4o8

15) One day after the attack, Donald Trump did not want to record a message to the American people that said “the election is over.”

President Trump on January 7th: "This election is now over. Congress has certified the results — I don't want to say the election's over."#January6thHearing pic.twitter.com/tZ5urGjsZZ

You need to watch this video pic.twitter.com/KfMj6FlFvi

17) By attempting to block the peaceful transfer of power, Donald Trump put our national security at risk.

Matthew Pottinger: "Our national security was harmed in a different way by January 6th. I think it emboldened our our enemies by helping give them ammunition to feed a narrative that our system of government doesn't work, that the U.S. is in decline." #Jan6thHearings

18) The nonpartisan Committee reminded us Donald Trump has never taken responsibility for the bloody attack or the loss of life on January 6.

He's also never acknowledged the names of the officers who died following the attack.

They protected our democracy and paid the ultimate price. He stayed silent.

Trump campaign aide Tim Murtagh text about Trump: “Also shitty not to have even acknowledged the death of the Capitol Police officer.”

Campaign aide Wolking responded: “That is enraging to me. Everything he said about supporting law enforcement was a lie.”

What Should I Do When I See Disinformation?