On Wednesday, June 19th Colorado Common Cause hosted a screening and panel discussion of Knock Down the House at the Mercury Café. This was a perfect movie and the perfect location to have a conversation about women in politics. 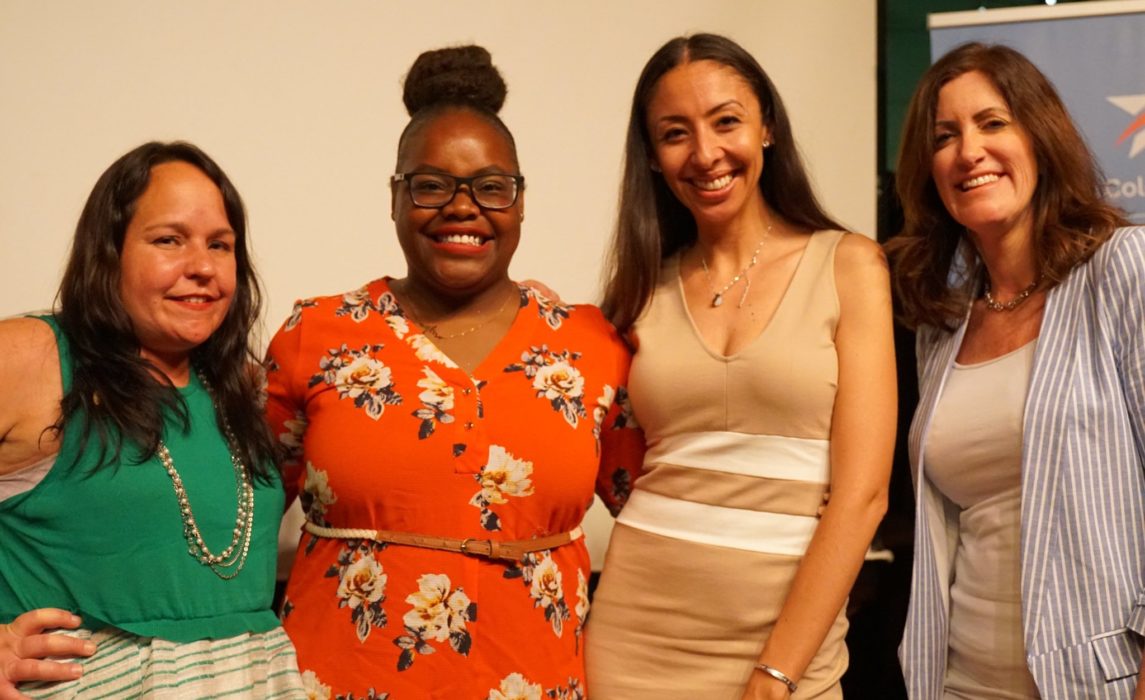 Knock Down the House Panel Members

Knock Down the House, documentary by Rachel Lear and Robin Blotnick, tells the story of four working class, progressive, grassroots, women running for Congress. These women build a movement to challenge and unseat male incumbents, and also to upset the business as usual politics. This film features the campaigns of Alexandria Ocasio-Cortez, a former waitress/bartender from New York;  Amy Vilela, a Nevada mom who lost her 22-year-old daughter to a brain clot when a hospital turned her away due to lack of health insurance; Cori Bush, a St. Louis nurse who rushed to help the wounded during the Ferguson, Missouri uprising after the murder of Mike Brown by police; and Paula Jean Swearengin, a coal miner’s daughter from West Virginia that watched her neighbors suffer and die from the killing environmental effects of the coal industry. Without political experience or corporate money, each of these women decided that representing their communities was important enough to run for office.

After the film screening, a diverse group of four panelist who have run their own races in Colorado shared their experiences and truths with the audience. Our panel consisted of a Colorado State Senator,  RTD Director, CU Regent and City Council member-elected. This panel consisted of women of various races, sexual orientation and political parties who offered their unique perspectives on the influence of money and politics, community representation, and the old boys network.

We were joined by:

Senator Faith Winter, state senator for district 24 – Sen. Winder has served on the board of the Butterfly Pavilion and on the advisory board of a Precious Child. She previously served as a Westminster City Council member for seven years, and the representative from house district 35. Prior to holding office she has worked as a field organizer for Green Corps, a national program director for EnviroCitizen, a national field director for The White House Project, a program director for Colorado Conservation Voters, and an executive director for Emerge Colorado.

Shontel Lewis, District B RTD Board-member –  Board-member Lewis campaigned on a commitment to make transit affordable and available, and to bring RTD closer to the communities it serves. A longtime resident of  Denver’s Five Points neighborhood, she  graduated from Manual High School and now serves as  the Associate Director of Community Engagement Strategy and Advocacy for Denver Public Schools. Previously she has worked as  the Transit Equity Specialist at RTD and the Director of Equity and Innovation at Project V.O.Y.C.E, a non-profit that she co-founded.

Candi CdeBaca, Denver City Council Member-elect – Future Council Woman CdeBaca was elected to represent Denver’s 9th district in June 2019. She is a proud fifth-generation native of northeast Denver, Colorado and graduate of Manual High School. A long time champion of civic engagement, she  was one of the first students to be appointed to the Denver Mayor’s Commission on Youth and the Mayor’s Latino Advisory Council. A recipient of the Daniels Fund Scholarship, CdeBaca was the first and youngest dual-degree graduate from the University of Denver Graduate School of Social Work. Councilmember CdeBaca served as the Executive Director of Project VOYCE, a youth development and civic engagement organization she co-founded.

Regent Heidi Ganahl,at-large CU Regent –  Ms. Ganahl attended the University of Colorado Boulder and earned a bachelor’s degree in business. She went on to earn a master’s degree in health care administration from the University of Denver. Having won a statewide race in 2016, Ganahl is the current chair of the regents’ finance committee. She also served as one of the chairs of Colorado Fair Maps campaign which worked to draft and pass an initiative which dramatically improved Colorado’s redistricting process. Previously, she had created the Camp Bow Wow business and then sold it for over $100 million. She also leads her own nonprofit, the Fight Back Foundation and is the author of the new release, SheFactor.

The panelist shared stories about running for office, perspectives on influence of money in politics, and advice for other people who are underrepresented in our democracy. They shared personal stories of male colleagues questioning their ability to govern and parent, surviving demeaning behavior (literally being patted on the head!), and not always being treated with the same amount of respect offered to their male counterparts.

Each of these women felt that they had to prove themselves to get elected into office and that they are capable of doing the job that they were elected to do because of their gender, race and sexual orientation.

Colorado Common Cause is a nonpartisan organization that knows that the ultimate power of our democracy is the people. Every Coloradan deserves a voice in shaping the future of our state and our communities and, simply put, our democracy is stronger when we all have a voice.  Discussions like the one on June 19th moved attendees toward engagement, not just or one party or another, but in the interest of promoting and improving our democracy.

Meet the Candidates for Denver County Clerk and Recorder