Last week’s Wisconsin Supreme Court election results – and the size and scope of Milwaukee County Circuit Court Judge Rebecca Dallet’s victory over Sauk County Circuit Court Judge Michael Screnock – demonstrated the high level of citizen support for stronger judicial recusal rules for judges in the state. That issue became a central focus of the election campaign with Dallet, who supported strong recusal rules, decisively defeating Screnock – who, not only opposed strong rules, but spent much of the campaign trying to obscure the issue altogether.

According to the non-partisan Brennan Center for Justice of New York University, the most accurate tracker of the money spent in this and other Wisconsin Supreme Court elections:

“The nonpartisan election saw $2.6 million in spending on television and radio ads alone, with more than $1.7 million coming from outside groups. Outside groups’ ads focused on candidates’ rulings in criminal cases – one ad described Dallet as “one of Wisconsin’s toughest judges,” and one ad argued Screnock “has a record of throwing the book at murderers, abusers and predators.” Ads also attacked Dallet and Screnock for allegedly ruling leniently in particular criminal cases. The race attracted national attention, including robocalls by former Vice President Joe Biden on behalf of Dallet, and spending by the National Rifle Association on behalf of Screnock.

The race elevated judicial recusal as a central issue. Despite recent reform efforts, Wisconsin’s Supreme Court has maintained lax recusal rules, which say that campaign contributions alone are insufficient grounds for recusal. Dallet and Screnock debated whether their opponent would step aside in cases involving special interests or lawyers who supported their campaigns. Dallet said after her victory that “one of her top priorities…is to reopen the idea of changing the court’s recusal rules.”

The biggest outside spender in the election, Wisconsin Manufacturers and Commerce (WMC), spent about a million dollars, including on particularly vicious and largely untrue attack ads against Dallet on a criminal matter. WMC, a business organization, was willing to tear down Dallet at any cost, to protect their investment in Screnock and his opposition to strong judicial recusal rules. Citizens might ask how running nasty, untrue attack ads is good for “business” in Wisconsin.

The current “non-rule” on judicial recusal was written by WMC in 2010 and was adopted verbatim by a narrow 4 to 3 conservative majority. It basically said that judges should recuse themselves from a case only if they felt the need to do so. Large contributions to their campaigns or a significant amount of money spent by a so-called “independent,” outside special interest group (such as WMC) to benefit a candidate, do not trigger recusal from a case if the donor or outside group is a party to a case before the judge or justice – as it does in almost every other state.

As a result of this pathetic standard, Wisconsin has been judged to have the 47th weakest judicial recusal rules in the nation.

CC/WI has spent much of the past six months educating thousands of Wisconsin citizens about the need for stronger judicial recusal rules for judges at all levels. We strongly support the specific proposal put forward in January, 2017 by 54 retired Wisconsin jurists at all levels, in the form of a petition to the Wisconsin Supreme Court, which was not only rejected by a 5 to 2 margin, but denied even a public hearing, almost exactly a year ago. CC/WI organized public hears last Fall in Green Bay, Milwaukee and in Madison, and this year has been further educating citizens over social media through two short videos on the subject of judicial recusal: 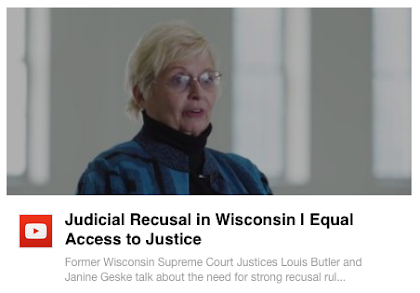 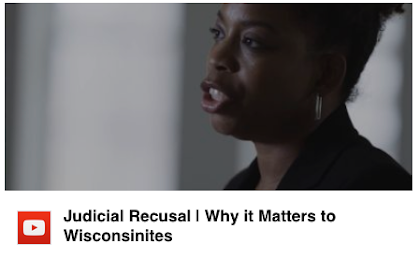 Please view both of these videos and let us know what you think. And share them with others so that more citizens will be educated about the need for reform in this critical area. Already more than 20,000 Wisconsinites have viewed them on our website, Facebook and YouTube. Please join them!

For more on this issue and for CC/WI’s commentary on the 2018 WI Supreme Court election, go here, here, and here.

Maybe, some day, people will hear