Rucho v. Common Cause is over. Now what?

An update on legal protections left to us after the SCOTUS decision on partisan gerrymandering.

Some of us have been wondering what legal standards still apply following the SCOTUS failure to act on partisan gerrymandering in Rucho v. Common Cause and Lamone v. Benisek. Fortunately, Common Cause's Dan Vicuña put together some information for us!

Redistricting reformers in Ohio and across the nation were deeply disappointed in the recent decisions in Rucho v. Common Cause and Lamone v. Benisek: the majority of the court failed to defend democratic principles when it found that federal courts do not have the legal tools needed to adjudicate partisan gerrymandering claims. As a result, plaintiffs cannot challenge maps in federal court using a partisan gerrymandering claim. Nevertheless, these decisions did not give legislators a blank check to do whatever they want when it comes to redrawing district lines.

Here in Ohio we have provisions in place that will protect us from the worst distortions of gerrymandering. We recently changed the Ohio Constitution to address both state legislative (2015) and congressional (2018) redistricting reform.  New rules keeping communities together and creating greater transparency mean the mapmaking process in 2021 will be much different from how it was in 2011, with more guardrails and protections for voters versus politicians.

Here are some additional legal standards that will continue to give voters a measure of protection against the rigging of district lines.

Racial gerrymandering (14th Amendment): When race is the predominant consideration in drawing district lines such that the mapmaker subordinates race-neutral districting principles to racial considerations, a court must apply strict scrutiny. This means that the mapmaker must demonstrate that the use of race was narrowly tailored to achieve a compelling state interest. If the mapmaker cannot do so, the map violates the equal protection clause of the 14thAmendment of the U.S. Constitution. Relevant case law includes Shaw v. Reno, Shaw v. Hunt, and Miller v. Johnson, and Alabama Legislative Black Caucus v. Alabama.

Are you still concerned about gerrymandering? Here’s something you can do: Take the End Gerrymandering Pledge and encourage mapmakers to do so as well.  This will help set the stage for productive mapmaking in 2021 that focuses on the voters, rather than partisan advantage. Click here for Take the Pledge to End Gerrymandering Resource Kit. 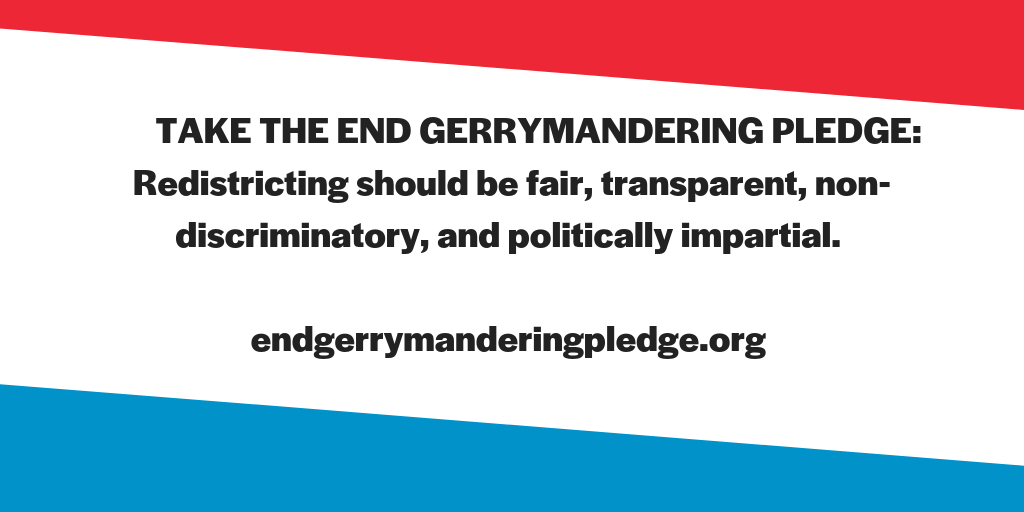 The Cameras are On!

Take the Pledge to End Gerrymandering