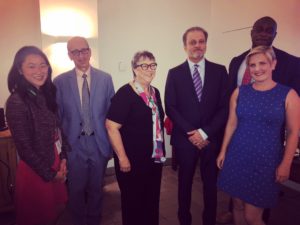 The candidates were unanimous and enthusiastic in their support for voting reform:

“We need to be leading the nation, not be the worst.”- Leecia Eve

“More individuals need to vote in the state of New York and we need to make it easier and not continue to put up roadblocks.”- Tish James

“We will go hammer and tong at the individual voter who is disenfranchised… That is wrong.”- Sean Patrick Maloney

“Yes, we must push for greater legislation including early voting. 37 states have early voting, New York does not.”- Zephyr Teachout

The press agrees! Check out the stellar coverage in City Limits, Gothamist, and the New York Post. Missed the debate? You can listen via WNYC or watch below (jump to the 30 minute mark for our question).