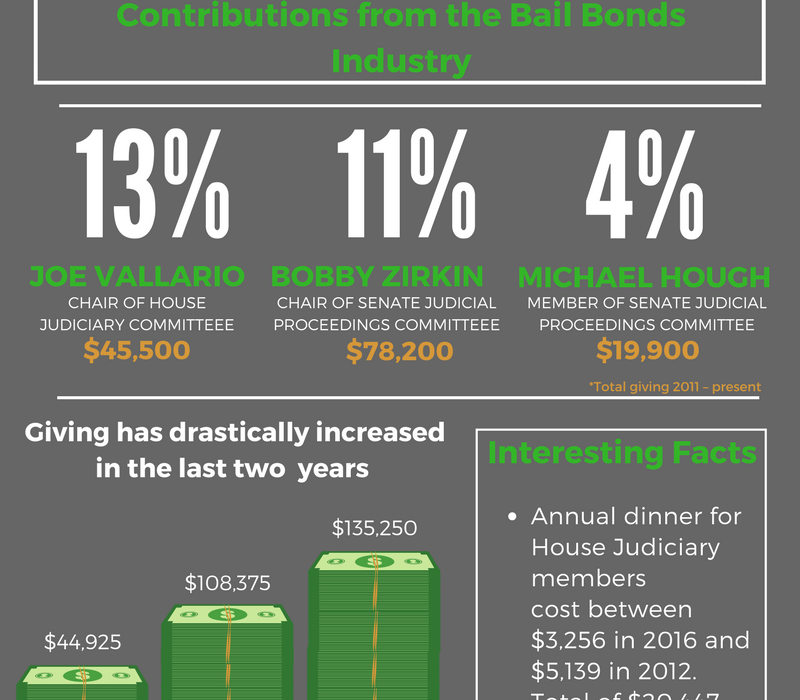 Maryland’s 2017 legislative session started with the usual excitement and fanfare. But it also was marked by a string of scandals – most notably FBI allegations of bribery against a Prince George’s County delegate¹ – that raise questions about what it takes to gain influence in Annapolis.

Last winter, Common Cause Maryland chose one industry to investigate in more depth: Bail bonds, the private companies that, for a fee, pledge money or property as bail for the appearance of persons accused in court. Our research on the bail industry demonstrates how private industry spending buys influence. CCMD examined campaign and lobbying spending by the industry, creating an interesting snapshot of how special interests operate.

Maryland is one of the top states for campaign donations by the bail bond industry, ranking behind only California and Florida, according to data from FollowtheMoney.org. In fact, when analyzing donations to individual candidates, our two largest recipients of bail bond donations, Sen. Bobby Zirkin and Del. Joseph Vallario, are the second- and third-highest recipients in the U.S. Total giving by the bail bond industry from 2011 to 2017 was $288,550. Giving in the last election cycle totaled $153,300. Giving in the current election cycle is on track to massively overtake that number, having hit $135,250 in just the first two years of the current cycle. Donations in just the last year totaled a staggering $87,100.

Our press release is available online here, and you can read the full executive summary here. The research was done in two phases: a thorough analysis of giving from 2011 through the annual report in 2016, and additional analysis done immediately after the 2017 reports were filed this January 18.

Curious for more information on the bail industry and the efforts this legislative session? Listen to our podcast!