The Fight to Reform Redistricting in Colorado

In November 2018, Colorado Common Cause worked to end gerrymandering once and for all by helping to 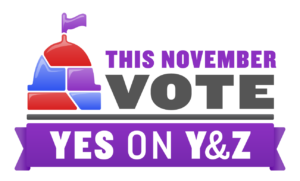 lead a coalition that passed Amendments Y and Z. Voters approved both measures by over 70 percent of the vote! These initiatives created independent redistricting commissions, which will be made up of everyday Coloradans – not politicians – and will create political districts that fairly and equitably represent the communities in our state.

Amendments Y and Z passed in 2018 thanks to decades of work – led by Colorado Common Cause – to lay the groundwork for redistricting reform.

We fought back against attempts by political parties to use the redistricting process for political gain. In 2013, we led the fight against the “midnight-gerrymander” – when state lawmakers attempted to rush through maps creating Congressional districts to benefit the Republican party.

We drafted ballot language that served as a model for Amendments Y and Z. In 2014, we drafted and collected signatures on the Colorado Fair Redistricting Act – which would have created an independent commission to oversee the mapping of Congressional and legislative districts.

The people of the state of Colorado hereby find and declare that fair political representation requires that the practice of gerrymandering, whereby Congressional and Legislative districts are purposefully drawn to favor one political party over another, MUST END. -Statement of Purpose, 2004 Colorado Fair Redistricting Act

We brought together multiple organizations with different visions for redistricting reform. In 2018, two different groups introduced separate ballot initiatives to reform the redistricting process. We worked with these groups to draft new measures – that became Amendments Y and Z – which combined some of the strongest aspects of the original proposals.

And we worked to get Amendments Y and Z onto the ballot. When these initiatives were presented to the Colorado legislature in the form of two bills, we lobbied at the Capitol for bipartisan support. And in a time of political partisanship, the bills passed both houses of the legislature – UNANIMOUSLY.

Then voters approved Amendments Y and Z with 71% of the vote.