These maps was drawn based on the constitutional criteria using input from more than 70 community meetings attended by over 1,200 Coloradans. We believe these maps truly prioritizes communities of interest. 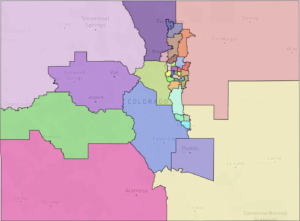 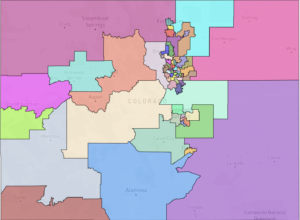 The districts we draw now will determine every Colorado community’s resources and representation for the next decade, and fair districts make communities stronger.

Historically, neighborhoods and communities have been carved up by party leaders and elected officials to concentrate power and serve their own political needs. The traditional system of redistricting is notoriously exclusive, secretive, self-serving, and has cemented the electoral winners for a decade in many states. This gerrymandering has severe consequences: voters have no real choices at the ballot, communities are robbed of representation, and elected bodies are not responsive to constituents.

With Amendments Y and Z, Coloradans reclaimed the responsibility for drawing voting boundaries, creating nonpartisan, independent commissions to draw the district lines so that voters pick their leaders instead of leaders picking their voters.

Colorado Common Cause is a nonpartisan, nonprofit organization with more than 24,000 members throughout the state. We know that our democracy is strongest when everyone participates, and that’s why we were drafters and strong supporters of the amendments that made this change possible.

This memo and our linked maps are the reflection of community meetings and mapping sessions that we conducted throughout the state. Between January and August 2021, Colorado Common Cause hosted 68 meetings for more than 1,200 Coloradans from every region of the state. We discussed the redistricting process and listened to parents, students, retirees, business owners, immigrants, farmers, ranchers and other Coloradans of all political backgrounds as they talked about the things they loved and cherished about their communities. These maps take into account their many stories to reflect the true diversity of our state.

Our maps also follow the criteria set forward in the Colorado Constitution:

By “preserving whole communities of interest,” the state constitution is requiring that we draw districts that keep communities with common policy interests together, setting aside partisan competitiveness and arbitrary county borders, so everyone gets a voice in our democracy.

After all the constitutional criteria have been met, only then is the commission directed to maximize the number of politically competitive districts (Colo. Const., art. V, § 44.3(3)(a)). Our legislative maps are made up of districts that are reflective of the politically diverse communities that comprise our state, with our House map proposing 15 competitive districts and our Senate map proposing 11. As many as nine State House seats and five State Senate seats would have been decided by less than 2,000 votes in 2020.

Additionally, our Constitution requires that maps cannot be drawn in a way that limits the right to vote or the electoral influence of communities of color and non-English speakers (Colo. Const., art. V, § 48.1(4)(b)).

In the Denver Metro region, our maps create 13 State House seats and seven State Senate seats where communities of color would have the representation necessary to influence the policies that will affect their lives. Rather than prioritizing the arbitrary lines of the City and County of Denver, our maps are based on where people have developed and built their communities. The result is districts that recognize the diverse needs of the voters and residents in and around the Denver Metro area.

House District 9 and Senate District 21 recognize the historically Black and Latino neighborhoods in Northern Denver and southern Adams County. These vibrant communities on either side of the county line have shared concerns related to clean air access and equitable school funding for their families. A shared legacy of political neglect has left communities in both counties to combat the rising gentrification and industrialization of the area. Their consolidation within a single district would grant these communities, for the first time, the ability to influence their representatives with a united voice.

Both Ute reservations are combined in a single district, providing the best prospect for the representation of indigenous communities at the state capitol. In the Roaring Fork, lower Arkansas, and San Luis Valleys, both the House and Senate maps have taken careful consideration to keep together communities whose voices have historically been divided and forgotten by our legislative maps.

Drawing district maps is both an art and a science and Colorado Common Cause acknowledges that there are many ways to craft representative maps.  Community voices are paramount to creating fair districts and we encourage the commission to prioritize our diverse communities of interest when deciding on the final maps.

Coloradans sent a strong message with the overwhelming passage of Amendments Y & Z that no matter what we look like or where we live, we all deserve to have our voices heard and our votes count. This is a once-in-a-decade opportunity to ensure fair and equitable representation for years to come–we must make it count, for all of us.