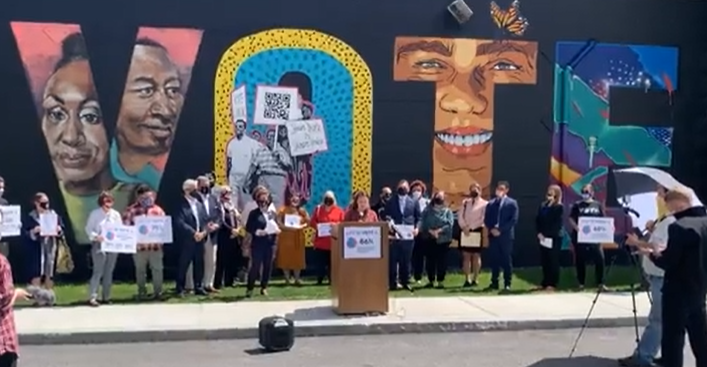 Providence – The Rhode Island Voting Access Coalition released the results of a poll today showing strong public support for changes that are part of the Let RI Vote campaign. While other states like Georgia, Florida and Texas are actively enacting voter suppression laws, the Let RI Vote campaign is focused on safely and securely expanding access to the ballot for all eligible voters. These poll results show strong bipartisan support for policies to make voting easier.

The survey shows that of Rhode Island voters who cast ballots in 2020:

“In 2020 Rhode Islanders were given choices to cast their ballots and they responded in record numbers,” Senator Dawn Euer (D-Newport, Jamestown). “After our state ran four successful elections giving voters those choices it’s time to make those changes permanent. All Rhode Islanders deserve an opportunity to vote by mail, or early, or on Election Day, in a manner that is safe and secure.”

More than 40% of voters surveyed said pandemic-related changes made it “easier” to vote than in past years. The Rhode Island Voting Access Coalition supports legislation to make COVID-era changes permanent, and make other improvements. The Coalition created the Let RI Vote campaign to support two pieces of legislation, the Let RI Vote Act (H 6003 Kazarian/S 0516 Euer), and a constitutional amendment that would allow same day voter registration (H 5983 Kazarian/S 0569 DiMario). The Let RI Vote Act makes permanent the many temporary changes made during the pandemic.

The poll, commissioned by Coalition partner, Represent US, and conducted by Lincoln Park Strategies, shows that Rhode Islanders overwhelmingly support these policies to make voting more accessible for every eligible voter.

The poll showed strong voter support for the proposed changes:

“In the middle of a pandemic, a record number of Rhode Islanders cast ballots in the 2020 elections,” said Representative Katherine Kazarian (D-East Providence). “Changes that were made in response to COVID made it easier for people to vote, and more people voted. Rhode Island’s voter turnout was 6 points higher than in 2016. The same thing happened all across the country. It’s pretty obvious that when voters have options about how to cast their ballots, more people vote.”

In addition to expanded access to mail ballots and early voting, the Let RI Vote campaign includes a resolution to amend the Rhode Island Constitution and allow for same-day registration.

“We need to modernize all aspects of voting here in Rhode Island to reflect advances in technology and the way Rhode Islanders live, work, and participate in civic life now,” said Senator Alana DiMario (D-North Kingstown, Narragansett). “We have the capacity to verify residency much faster than when the 30-day registration requirement was put in place, and it’s time to put a question on the ballot in 2022 to remove that requirement from the state constitution and move us closer to same-day voter registration for local and state elections.”

The survey also asked voters how they cast ballots in 2020:

“Last year proved beyond a doubt that we can improve access to the ballot box while protecting the integrity of every vote,” said Rhode Island Secretary of State Nellie M. Gorbea. “At a time when many states are working to restrict voting options for their citizens, we must continue to be a leader in voting access by enacting the Let Rhode Island Vote Act.”

The Rhode Island Voting Access Coalition chose the location of the now-famous VOTE mural as our staging location for this press conference for what it signifies and want to acknowledge the amazing artists who created it: Kendel Joseph, Jessica Brown, Angela Gonzalez, and Mikey Fernandez.

A recording of the press conference announcing the poll results is available here.