In Gardner’s spirit, every citizen should work to hold power accountable by making the phones ring in Washington, their state capitols, and local government offices to ensure that government will always be of, by, and for the people. 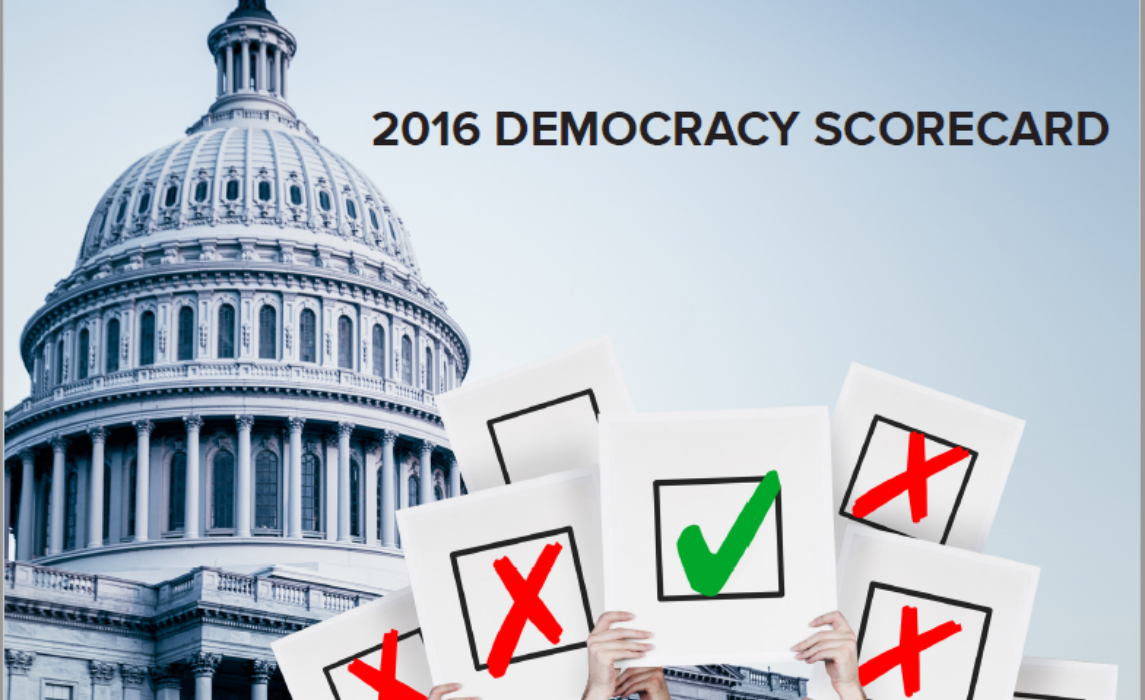 Forty-six years ago last month, John W. Gardner, a Republican whose sense of duty to country led him to accept a cabinet post in the administration of a Democratic president, had a simple but powerful idea: citizens engaged in the democratic process can make a difference. “We want public officials to have literally millions of American citizens looking over their shoulders at every move they make,” Gardner wrote. “We want phones to ring in Washington and state capitols and town halls. We want people watching and influencing every move that government makes.”
Gardner’s letter launched Common Cause; his idea continues to animate our work, including this 2016 Democracy Scorecard. The Scorecard is geared toward solving problems that have thrown our democracy out of balance. It reflects a commitment to ensuring that every voice can be heard in our politics and that everyone plays by the same set of common sense rules. The Scorecard provides data on every member of Congress based on their sponsorship or co-sponsorship of bills that would tighten disclosure requirements for political contributions and spending and bust the power of big money in our elections by creating a special public fund to supplement small-dollar contributions from individuals.
Other campaign finance bills in the package would fix the broken public financing system for presidential campaigns, shine a light on corporate political spending so that shareholders understand how money is spent, overturn the Supreme Court’s disastrous Citizens United decision, and tighten the prohibition on political spending by foreign entities. The Scorecard also includes bills to restore provisions of the Voting Rights Act gutted by the Shelby v. Holder Supreme Court ruling, modernize and enhance voting systems, provide automatic registration so that voters are added to the rolls when they do business with any state agency, and create impartial citizens’ commissions to draw new congressional and legislative districts after each census.
Common Cause regularly publishes such election year scorecards. This one is different from its predecessors in its listing of sponsorships and co-sponsorships rather than actual votes. Congress unfortunately is now so gridlocked that common sense reform measures like those listed here rarely come to a vote in either the House or Senate. For the House portion of this scorecard, we were able to include a few votes on amendments and procedural questions concerning money-in-politics issues. Those measures included an amendment requiring tax-exempt “social welfare” organizations to disclose their political spending and another authorizing the Securities and Exchange Commission to develop a rule requiring publicly traded corporations to disclose their political spending.
Cosponsorships are just one metric, and there are democracy reform champions in Congress who this Scorecard might not recognize. Despite its limitations, we believe the Scorecard provides a useful tool for citizens concerned about these issues. In recent months, we’ve sent each congressional office four notices listing the bills included in the Scorecard; we wanted to make sure every member of Congress knew which bills he or she was being evaluated on. Since the notices went out, a combined total of more than 250 cosponsors have been added to these bills.
We urge readers to check the performance of their senators and representatives on issues covered in the Scorecard and to seek out multiple perspectives on these and other key issues. In Gardner’s spirit, every citizen should work to hold power accountable by making the phones ring in Washington, their state capitols, and local government offices to ensure that government will always be of, by, and for the people.