In Pennsylvania, Congressional redistricting is controlled by the state legislature, while a five-member politician-appointed commission draws state legislative lines. When partisan politicians control the mapmaking process, we’re especially vulnerable to gerrymandering — which is why it’s so important we push our lawmakers to be transparent and consider public testimony every step of the way.

The majority and minority leaders of the PA House and Senate each appoint two members to the Legislative Reapportionment Commission. These four members then have 45 days to vote on a fifth member to be the chair. If they can’t agree in this time, the PA Supreme Court appoints the chair instead.

The maps drawn by the LRC are not subject to approval from either the state legislature or the governor. Instead, the Commission has full control over the mapping process. Any challenges to the map must be brought within 30 days to the Pennsylvania Supreme Court.

In The Congressional Redistricting Process, the U.S. Census population data is used to determine how many seats each state gets in the U.S. House of Representative. Once our legislators know how many Congressional districts we will have, they redraw district lines to make sure those districts are as equal in population as possible.

They then pass these maps as a bill — it must be approved by the PA House and Senate before going to the governor’s desk, where the governor can approve or veto.

Both legislative and congressional districts must comply with the provisions of the US Constitution and Voting Rights Act and keep districts reasonably equal in population.  In addition:

Congressional districts comply with the provisions of the US Constitution and Voting Rights Act and keep districts reasonably equal in population.

Why Redistricting Matters for Pennsylvania

Hearings are held across Pennsylvania from May through September to take testimony from communities of interest. When the legislature receives the federal Census data, they use it in combination with public input to create draft maps.

From October through December, the legislature processes the data, displays draft maps, and holds hearings to get public feedback to revise the maps. After that, the Congressional draft maps are finalized, voted on by the state legislature, and sent to the Governor’s desk, who can veto or approve. 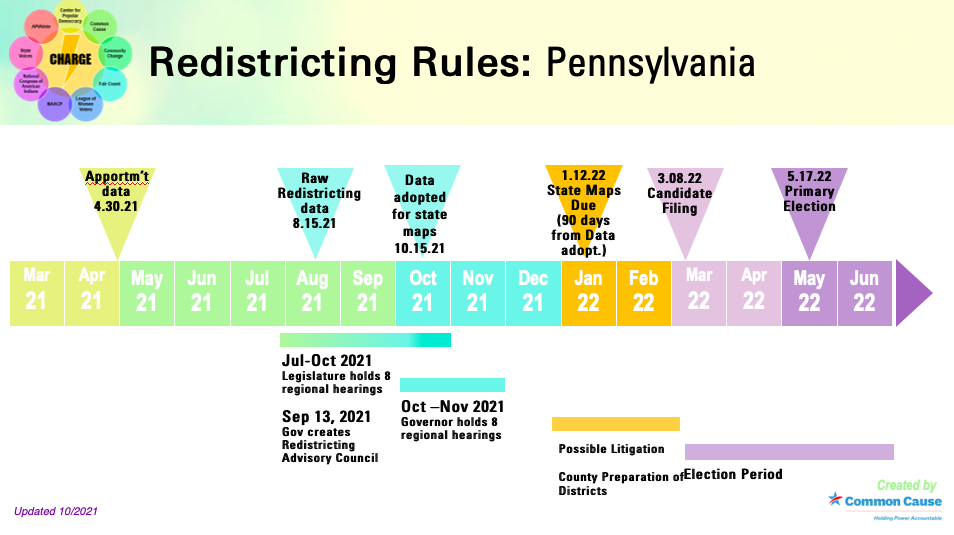