Every ten years, New Mexico redraws its federal, state, and local legislative district maps. This process is meant to ensure that as populations grow and change, every New Mexico voter can have equal representation and equal voice in government.

We’re fighting for fair, transparent, and equitable redistricting at every level — advocating for legislation like the Freedom to Vote Act to help end partisan gerrymandering, bringing New Mexico residents to testify at public hearings, and telling our mapmakers the story of communities across New Mexico.

For the first time in our state’s history, New Mexico is utilizing an advisory Citizen Redistricting Committee (CRC), which allows for a more transparent process with more meaningful public participation. The CRC will submit maps to the legislature for consideration, and we’re urging lawmakers to adopt or explain amendments made to the CRC maps. Visit the CRC site for more information at NMRedistricting.org.

When partisan politicians control the mapmaking process, we’re especially vulnerable to gerrymandering — which is why it’s so important we push our lawmakers to be transparent and consider public testimony and the work of the CRC every step of the way.

Why Redistricting Matters for New Mexico

Hearings are held across New Mexico to take public comments. When the commission/legislature receives the federal Census data, they use that with public input to create draft maps. Once these draft maps are released, they hold hearings to get public feedback and revise the maps, before sending a finalized version to the Governor’s desk, who can veto or approve.

Public hearings have officially begun in New Mexico! Find a full schedule of public hearing dates, as well as information on how to join here: https://www.commoncause.org/new-mexico/democracy-wire/upcoming-map-meetings-of-the-citizen-redistricting-committee/ 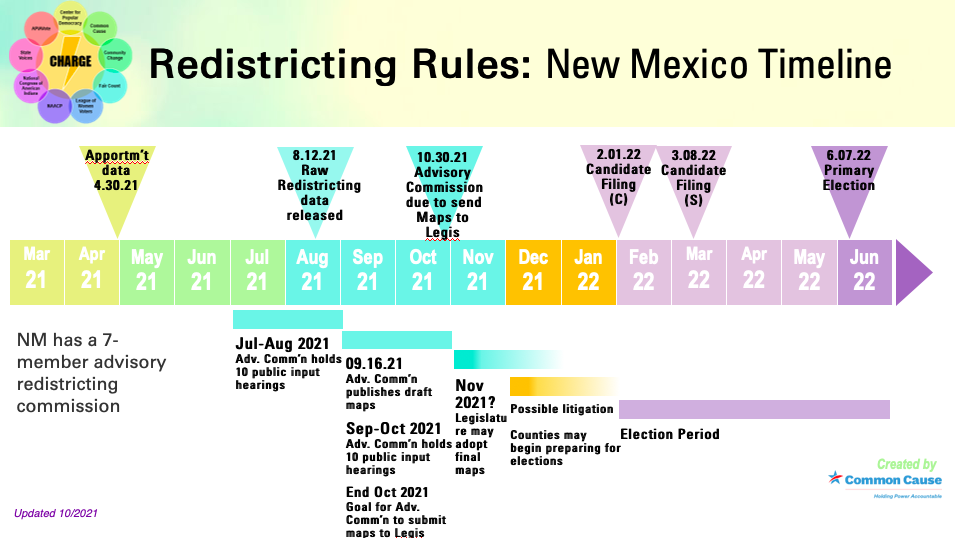 Common Cause New Mexico has been leading the charge for fair, inclusive, and transparent redistricting. Read more about our biggest campaigns.