On May 16th, new Chicago wards were adopted. Use the map below to find out your new ward.

Every ten years, Illinois redraws its federal, state, and local legislative district maps. This process is meant to ensure that as populations grow and change, every Illinois voter can have equal representation and equal voice in government.

We’re fighting for fair, transparent, and equitable redistricting at every level — advocating for legislation like the Freedom to Vote Act to help end partisan gerrymandering, bringing Illinois residents to testify at public hearings, and telling our mapmakers the story of communities across Illinois.

In Illinois, redistricting is controlled by the state legislature.

IN THE STATE LEGISLATIVE PROCESS, the state legislature passes a plan as a statute, subject to gubernatorial veto. If these districts are not approved, an eight-member backup commission, made up of four members of each party, takes over. If this commission fails to pass maps, the Illinois Supreme Court nominates two potential members of different parties, and the Secretary of State randomly selects one to add to the commission. This nine-member commission is then responsible for passing a state legislative map.

IN THE CONGRESSIONAL PROCESS, the state legislature passes a plan as a statute, subject to gubernatorial veto.

In Illinois, ongoing litigation may impact the final maps.

Why Redistricting Matters for Illinois

The legislature must draw all new districts except the federal congressional districts by June 30th. If they fail to approve new maps by then, a bipartisan commission is created and takes over the process.

Hearings are held across Illinois. When the legislature receives the federal Census data, they use that and public input to create draft maps. Once these draft maps are released, they hold hearings to get public feedback and revise the maps, before sending a finalized version to the Governor’s desk, who can veto or approve.

Public hearings have officially begun in Chicago! Join us at an upcoming hearing:

To submit written or spoken testimony, please sign up above or visit https://chicagoswards.org/public-hearings. 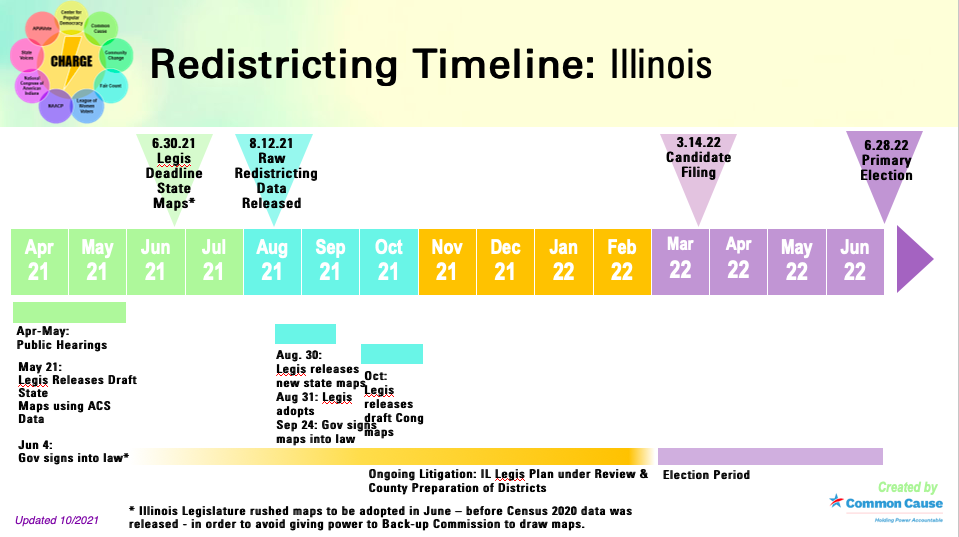 Use these resources to learn more about how you can get involved in fighting for fair districts and stopping gerrymandering in Illinois.