The Nonpartisan Case for Removing President Trump From Office

Common Cause has officially called for President Trump to be removed from office -- and we're delivering nine articles of impeachment against him to every member of Congress.

Until today, Common Cause has never called for a president’s removal in our 50-year history. Impeachment is an extraordinary measure — one that We the People put in place only for the most extraordinary circumstances.

But impeachment and removal is the necessary response to the President’s actions — not just one scandal, but repeated, shameless wrongdoing.

Bribery. Abuse of power. Obstruction of justice. Corruption. Condoning Trump’s behavior through inaction would be a permanent stain that our democracy might never recover from.

On November 22, 2019, Common Cause staff and volunteers will deliver nine articles of impeachment to every member of Congress — including President Trump soliciting a bribe from Ukraine’s government, accepting foreign emoluments, inviting foreign interference in our elections, profiting from his office, and more.

Once you have, you can take more action to make an impact: 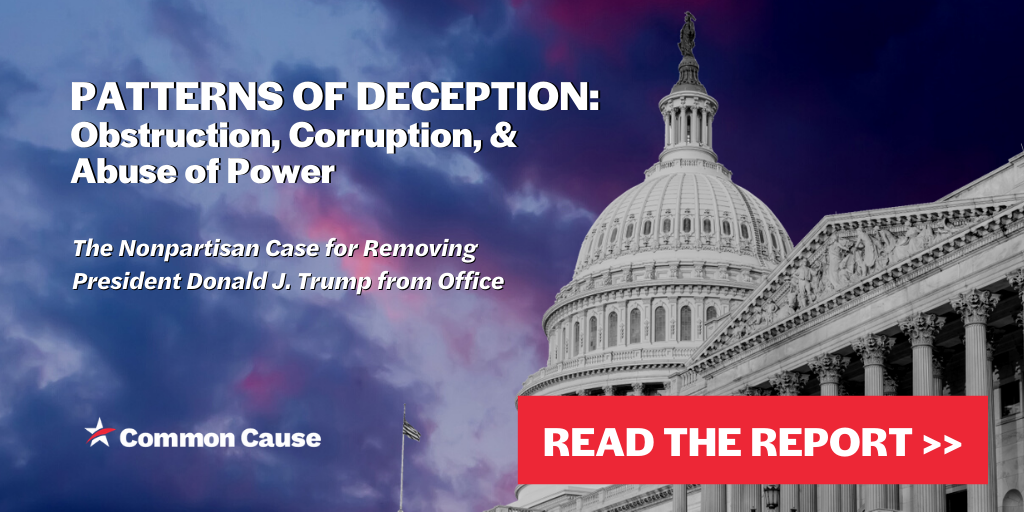 Impeachment is an extraordinary measure that We the People put in place to remove a president for his dangerous actions.

But we’re in an unprecedented and sobering moment — one that goes much further than a single Trump scandal. Here’s some of the wrongdoing detailed in our report:

Ukraine: President Trump withheld an almost $400 million military aid package to Ukraine to pressure Ukraine’s government into investigating his 2020 election opponent, Joe Biden. That’s bribery, and a flagrant abuse of his power. (In addition, it is illegal for anyone to solicit campaign assistance — which counts as a “contribution” — from a foreign national.)

Dereliction of Duty: The Russian government launched a large-scale effort to interfere with the 2016 elections — through disinformation and hacking. As a candidate, Trump openly welcomed their assistance. And as president, he’s done absolutely nothing to protect us from a future attack and in fact invited further interference, continuing with a pattern of behavior that strikes at the heart of democratic governance.

Obstruction of Justice: Trump went all-out to derail the investigations into Russian interference — firing FBI Director James Comey and repeatedly attempting to fire or intimidate Special Counsel Robert Mueller. Mueller’s final report detailed ten potential episodes of obstruction of justice. [5] He has also done everything he can to obstruct the House of Representatives’ constitutional right to launch an impeachment inquiry by refusing to comply with document requests and letting White House officials ignore legitimate subpoenas.

Emoluments: The Constitution forbids the president from receiving any “emolument” — a gift or payment — from any government, foreign or domestic. Trump has repeatedly violated this by continuing to own and profit from the Trump Organization: diplomats stay at his hotels, foreign firms rent space in Trump Tower, and officials of our own government continue to use his properties at taxpayer expense — potentially compromising his decision-making as leader of the country.

Hush Money: During the 2016 election, Trump’s personal lawyer Michael Cohen arranged for six-figure “hush money” payments to keep multiple women from coming forward about alleged extramarital affairs with Trump. Cohen, currently serving federal prison time, testified under oath that Trump directed him to do so — which would be a felony campaign finance violation. We can’t let anyone — not even the president — break our laws, then not hold them accountable.

See All Nine Articles of Impeachment 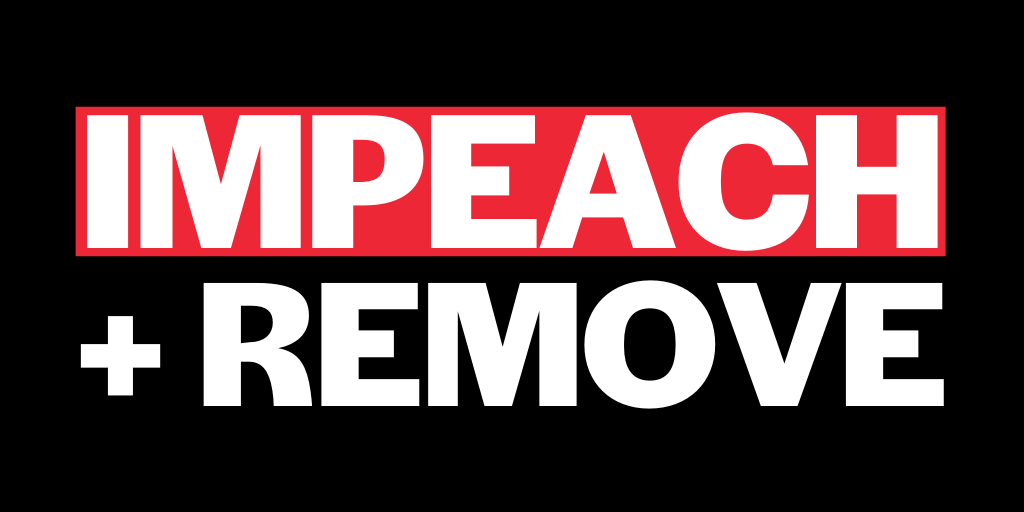 This isn’t just about Donald Trump. It is about making clear that in America, nobody, including the President of the United States, is above the law.

President Trump has shown no interest in safeguarding American elections, and actually welcomed foreign interference in 2020. He has abused his power by putting his personal political interests above the national security interests of the United States. And he has repeatedly corrupted his public office to serve his own private interests.

Simply put, President Trump is a danger to the integrity of our government, the safety of our citizens, and trust in our democratic institutions.

We do not come to this decision lightly. We’ve spent the last three years following the facts, carefully documenting President Trump’s violations and abuses of power, and urging members of both parties in Congress to hold the administration accountable.

All while moving powerful democracy reforms on the state and national level, including the passage of H.R. 1, the For the People Act in the House of Representatives.

Impeachment is in the Constitution precisely for a situation like the one we’re in: an out-of-control president acting as if they are totally above the law.

We Sent The Mueller Report To Half A Million Swing Voters, Here's What We Heard Back