For too long, the filibuster has been abused in the Senate to block overwhelmingly popular legislation and stifle the will of the voters. The new Senate must prioritize eliminating the filibuster -- so that our legislators can get to work on the issues that matter to the American people.

The 60-vote filibuster rule is undemocratic, and it needs to go.

But as long as the 60-vote filibuster rule remains in place, a minority of senators — representing a disproportionately white segment of the country’s population — can stop any legislative action in its tracks.

The filibuster as used today is not a talk-til-you-drop marathon session on the Senate floor. Instead, it’s a mechanism that allows one senator to object to a bill behind closed doors. Suddenly, the hurdle a bill must clear goes from a simple majority to 60 senators—a much higher bar.

In practice, the filibuster doesn’t inspire bipartisan action—it’s a recipe for gridlock and gives the Senate minority total veto power over the entire legislative process, even though they lost the election.

If we want the Senate to better represent us — and actually act in the interest of the American people, not just the powerful few — we must immediately eliminate the filibuster.

It’d only take a simple majority vote in the Senate to get rid of the filibuster. But unfortunately, some Democratic senators in the new Congress have hesitated to back the idea.

That’s why we must let them know that the American people are counting on them to do what’s right for our democracy. If you agree that it’s time to fix the undemocratic filibuster, add your name today.

Our campaign to fix the filibuster is one that nearly every other legislative priority you and I care about hinges on.

Here’s the good news — I think this is a fight we can win, if we’re willing to go all-in on it. Common Cause has the nonpartisan credibility, a history of leading work successfully on this issue, AND the grassroots people power required to move key senators and win the 50 votes we need to fix the filibuster.

If you can make a contribution to our Fix The Filibuster Fund right now, it will immediately make a difference — and help make sure the Senate can actually deliver the change that millions of Americans are demanding right now.

Americans chose new senators in the last election, stripping Mitch McConnell of his Senate majority. But as long as he can abuse the filibuster and require 60 votes to pass legislation through the Senate — he will still have a stronghold on Congress’ agenda.

A handful of self-serving politicians like McConnell shouldn’t have the power to hijack the Senate, block overwhelmingly popular legislation, and stifle the will of the voters. The new Senate must swiftly vote to eliminate the filibuster.

No matter which issues we want to make progress on — coronavirus relief, healthcare, racial justice, voting rights, or the climate — we must first make sure that the Senate can actually act in the interest of the American people.

Right now, Mitch McConnell and his caucus — who represent a disproportionately white minority of the country’s population — can shut down almost any bill they want by abusing the Senate filibuster.

We must let them know that the American people are counting on them to do what’s right for our democracy. If you agree that it’s time to fix the undemocratic filibuster, add your name today.

The filibuster has a shameful history…

During President Obama’s term, a minority of senators used it to shut down and block the DREAM Act, transparency in campaign spending (the DISCLOSE Act), gun violence prevention legislation, and workers’ rights — all of which would have passed an up-or-down vote, but instead died on the Senate floor. Why? Because the filibuster allows the Senate minority to overrule the majority and block whatever bills it chooses.

A handful of senators — who themselves represent a smaller portion of the country’s population –should not have absolute veto power over our entire legislative process. That is not democracy. That’s why we’re calling on the new Senate to make fixing the filibuster a priority.

Fixing the Filibuster is hardly a radical idea…

The filibuster is not in the Constitution, which explicitly outlines when a supermajority vote is necessary — approving treaties, overriding vetoes, and convicting for impeachment — not to pass legislation.

The Senate’s rules around debate and the filibuster have been amended many times before — most recently by Mitch McConnell himself, who changed the Senate’s rules to ram through two Supreme Court nominees with a simple majority.

Now, McConnell is desperately attempting to keep the filibuster in place — so he can abuse it to stop the new Senate majority from enacting the will of the voters that elected them.

But here’s the good news — it only takes a simple Senate majority to change the chamber’s rules again and end the filibuster — meaning 50 senators, plus Vice-President Kamala Harris.

Many major political figures from across the aisle have already expressed support for its elimination, including former President Barack Obama, who called it a “Jim Crow relic” at the funeral of civil rights hero Congressman John Lewis. 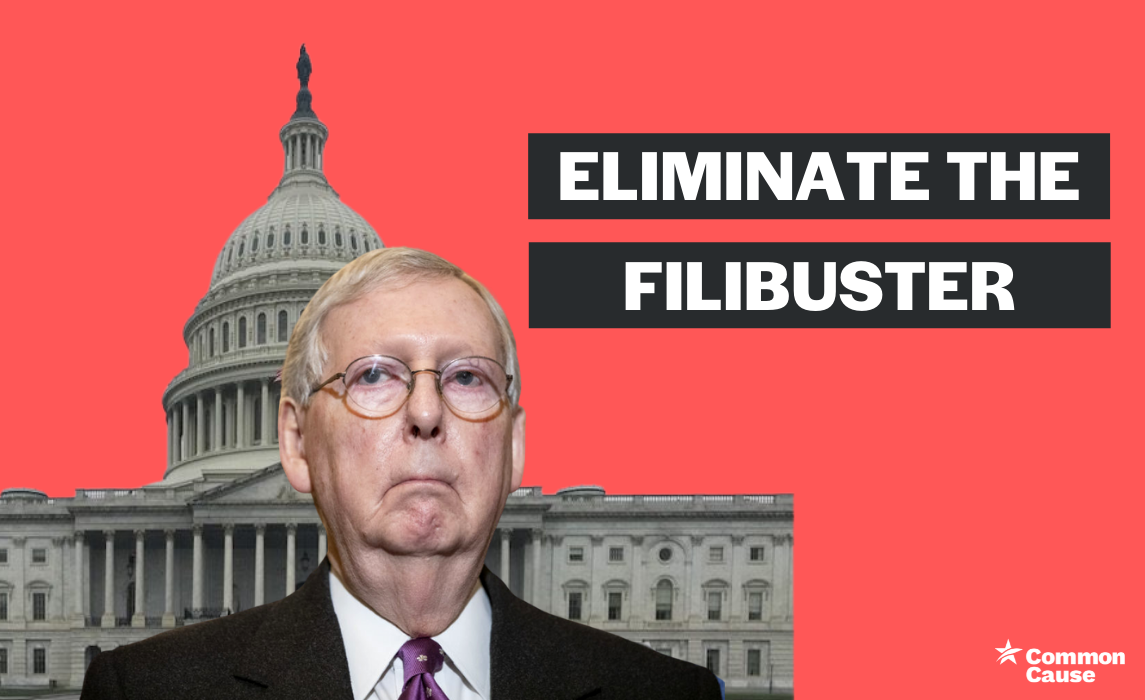 For The People Act