In what must have been a surprise to exactly no one, today the Ohio Supreme Court struck down the third—I mean fifth—set of General Assembly maps adopted by the Ohio Redistricting Commission. Since this fifth set of maps was entirely identical to the third set of maps that were struck down by the same court on 3/16/2022, the only mystery is why it took the court so long to find these very same maps to be non-compliant with the provisions in the Ohio Constitution, just as they did the last time around.

What was that line of Einstein’s? Something about the definition of insanity being doing the same thing over and over again and somehow expecting a different outcome? The Republican members of the Ohio Redistricting Commission have that down to a T.

Sadly, the majority strategy of repeatedly submitting gerrymandered maps while running out the clock is working well for the GOP members of the Ohio Redistricting Commission. The federal court, citing concerns about the possible timing of a primary election, already stated that if a new map was not adopted by May 28, they would instruct the Commission to use the third set of maps—even though this set was found to be unconstitutional by the Ohio Supreme Court. 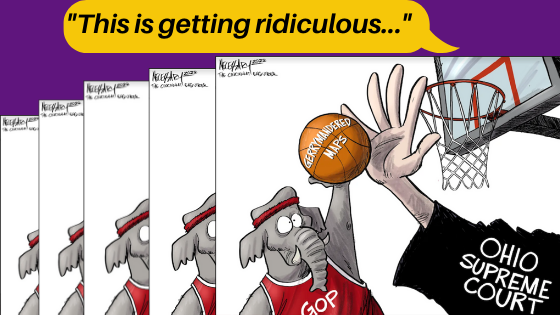 The words of Chief Justice Maureen O’Connor say it best. Here are some quotes from her concurring opinion. You can read the whole opinion at this link.

“The federal court determined that to avoid jeopardizing Ohioans’ right to vote, it would wait until May 28 before acting. But the federal court did not ‘stay [its] hand until May 28,’ as it stated it would, and leave the state to fix the crisis created by the commission’s own actions. Instead, the federal court provided the Republican commission members not only a roadmap of how to avoid discharging their duties but also a green light to further delay these proceedings by stating its intention to implement “Map 3”…, all the while acknowledging that this court had declared Map 3 to be invalid and unconstitutional.”

She continues: “…Lamentably, the federal court’s optimism that the commission members ‘are public servants who still view partisan advantage as subordinate to the rule of the law,’ proved to be unfounded.”

We know you are all hoping that at the very least, the commissioners who openly defied the Ohio Supreme Court’s order to draw a new set of maps would be found in contempt. We’re sorry to say that this was not the case. The Court found no contempt. This defies common sense. It’s a bitter pill to swallow; we’re sorry to be the bearers of the bad news that Senate Preside Huffman and Speaker Cupp will not be sanctioned, fined, or thrown in jail. Lord knows they richly deserve to be punished for openly and repeatedly defying the Ohio Supreme Court, the Constitution, and the voters of Ohio.

What a terrible precedent is set when our law-makers are allowed to ignore a court order. It doesn’t matter what party you belong to or how you vote: we all need and deserve to live in a society where no one is above the law and where even those at the top—ESPECIALLY those at the top—follow the law and are held accountable.

Meanwhile, here is a brief timeline for what to expect in the case over Ohio’s congressional map.

Don’t forget to join us Wednesday, June 8 for our Fair Districts All Volunteer Huddle. Until then, please continue to stir up good trouble about bad maps: write letters to the editor (enormous thanks to the MANY of you who have already done so); share these graphics on social media or simply follow and share our Fair Districts posts on Twitter, Facebook, and Instagram.