Special interests heavily dependent on the Ohio Supreme Court are poised to invest increasing amounts of dark money dedicated to preserving partisan gerrymandering in Ohio, according to a new investigation by the Ohio Capital Journal.

Why? Here’s some background: Back in 2010, the Citizen United v. FEC decision opened the door to unlimited corporate and special interest money in politics, including through “dark money” channels. Around the same time, REDMAP, a project of Republican State Leadership Committee of the United States, successfully targeted Democratic state legislative races with the goal of creating Republican-dominated legislatures to foster GOP-friendly congressional maps. The Congressional maps created in 2011 by these Republican-controlled legislatures heavily favored Republicans.

Ohio’s 2010 Democratic-led House of Representatives was one of the targeted legislatures, and indeed it returned to GOP control in 2011. The congressional maps drawn in 2011 significantly and persistently favor Republicans, with the GOP winning control of 75% of Ohio’s 16 congressional seats in every election from 2012 to today, despite the fact that Republican congressional candidates in those four election cycles have won only between 51 and 60% of the total statewide vote. This significant imbalance fostered reform efforts. 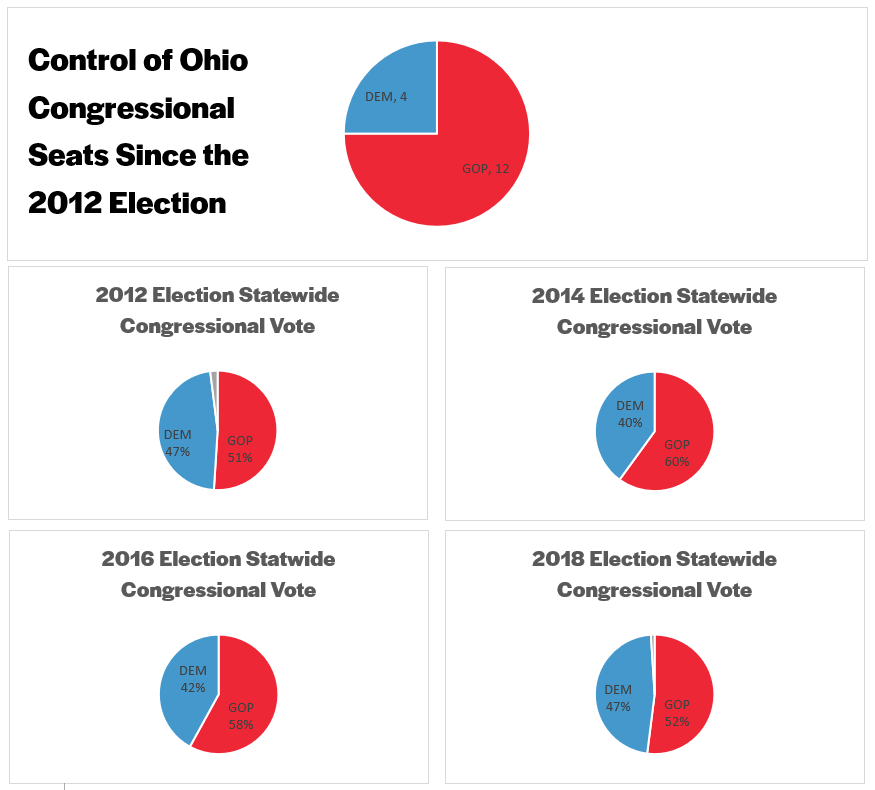 In 2015 and again in 2018, Ohio voters overwhelmingly approved redistricting reforms designed to rein in the worst aspects of gerrymandering. Both reforms identified the Ohio Supreme Court as the final arbiter of fair mapping making. Then, in 2019, the U.S. Supreme Court determined in Rucho v. Common Cause that the federal courts could play no role in preventing gerrymandering, further cementing the importance of the Ohio Supreme Court in battles over new maps likely to occur after redistricting in 2021.

Dark money first took center stage in races for the justice of the Ohio Supreme Court way back in 2000 when Citizens for a Strong Ohio, a pro-tort reform group associated with the Ohio Chamber of Commerce, spent $4 million in “issue ads” designed to defeat Alice Robie Resnick. If outside interests had that kind of money to spend back in 2000, one can only imagine the volume of cash that might be spent in 2020 to influencing our Supreme Court elections.

Here’s some of what the Ohio Capital Journal has found in its investigation: The Republican State Leadership Committee (RSLC) has been directing money to two out-of-state initiatives that hope to influence Ohio elections:

If the two Democrats running for the Ohio Supreme Court win in November, Democrats will take control of the state’s highest court for the first time in more than three decades. With a flurry of TV and digital ads, the Judicial Fairness Initiative is credited with electing a social conservative to the Wisconsin State Supreme Court last year in a race the National Review called a “stunning upset.’’ Obviously the hope is to repeat that kind of victory here in Ohio, thus preserving a GOP majority on the Ohio Supreme Court and increasing the likelihood that partisan gerrymandering is allowed to continue.

Of course there are Democratic-allied groups that are working on the redistricting issue as well, particularly former Attorney General Eric Holder’s National Democratic Redistricting Committee (NDRC). However, up to now, the NDRC has only indicated its intention to target Ohio Statehouse legislative races.

What is the problem with outside groups such as the RSLC getting involved in our judicial elections and trying to have influence over the redistricting process? A vibrant democracy needs an informed electorate. Dark money groups make it hard for voters to figure out who is trying to influence elections. With fights over the new maps that will be drawn during the redistricting process likely to end up in court, it’s no coincidence that these groups are gearing up in a year when control of the Ohio Supreme Court is at stake. It is also unseemly that judicial elections are being funded by groups that may end up with cases coming before the very judges to whose elections they have heavily contributed.

For more than forty years, the United States Supreme Court has upheld and elevated the importance of disclosure and transparency in the nation’s elections. In 1978, a majority of the US Supreme Court justices in First National Bank of Boston v. Bellotti stressed how disclosure helps citizens evaluate credibility:

What should we do?

Many people worry about the corrosive influence of money in elections. The problems multiply when the source of the money is undisclosed. Because we are supposed to be electing nonpartisan judges who must interrupt the law and deliver justice fairly, secretive dark money is even more corrosive in judicial elections. At the very least, legislation should be passed mandating robust campaign finance disclosure. In the meantime, special interest groups should voluntarily disclose their spending, rather than keeping Ohioans in the dark.

Redistricting is not the only issue likely to come before Ohio’s highest court that is drawing the attention (and dollars) of those trying to use special interest and dark money to influence judicial elections (and decisions).

Whether the concern is preserving partisan gerrymandering, keeping lucrative deals for charter schools, or ruling with energy companies rather than consumers, there is plenty of motivation for dark money groups to pour money into Ohio’s judicial elections. If voters were able to see the source of the money, it might make them think twice about the information political advertisements present. Without real transparency, our democracy and voters suffer. Transparency is even more important in judicial elections where judges make life and death decisions and impartiality is so essential. Ohioans need to have confidence in the courts and transparency helps foster fair courts and will help judges determine when they need to step away or recuse themselves from cases.

The Cameras are On!