Common Cause Announces Clemmons, NC Youth as Winner in 2021 “My Voice, My Art, Our Cause” Artivism Contest 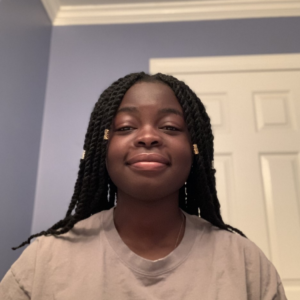 Clemmons, NC — Today, Common Cause announced Ifeoluwatobi “Tobi” Onasanya, 16, student at Parkland Magnet High School, as a first-place winner of the 2021 Artivism Contest. The competition was designed by the Common Cause Student Action Alliance to celebrate the 50th anniversary of Common Cause and the passage of the 26th Amendment, which lowered the voting age from 21 to 18. In the organization’s first-ever virtual competition bridging art with activism, youth nationwide were invited to submit art that expressed their perspectives on key democracy issues.

“Our democracy is strongest when everyone has a voice, regardless of age, zip code, or income,” said Karen Hobert Flynn, president of Common Cause. “The 2021 Artivism winners represent the creativity of the next generation that’s working to build a more vibrant and inclusive democracy. Common Cause will continue working with youth advocates to champion the changes needed to ensure young people can have a say in the decisions impacting their futures.”

The Artivism Contest invited youth ages 14-28 to raise their voices on any set of nine democracy issues, including access to voting, campaign finance reform, fighting against gerrymandering, and more. Contest winners’ art will be featured in the Common Cause Shop on select apparel and merchandise. Winners will also receive cash prizes, with $1,500 for first place, $800 for second place, and $600 for third place. 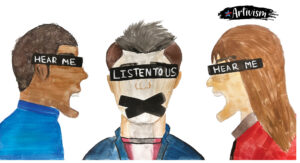 Onasanya’s winning art is part of the Free Speech & Freedom to Protest category. “I chose this issue area because during the past year freedom of speech and protest has been challenged as more and more people stand up to face inequality (especially surrounding race),” Onasanya said. “My artwork represents those who feel unheard in their efforts to speak out. I hope my work will convey a feeling of passion and almost anger, like the feeling of screaming without being heard.”

Onasanya submitted a drawing of two people yelling at a third person, who has tape covering their mouth. The words “Hear Me” overlay the eyes of the people yelling; and the words “Listen to Us” are across the eyes of the person who cannot speak.” Onasanya was the winner of the 14–17-year-old age group, and one of seven winners representing seven cities from California to North Carolina. Submissions were due September 30 and voting, open to all, took place every day from October 1 through November 2.

“We thank everyone who participated for bringing their unique perspectives and creativity to the 2021 Artivism Contest,” said Alyssa Canty, director of youth programs at Common Cause. “We look forward to working with the winners to showcase their art and help inspire more youth to make their voices heard for a democracy that is inclusive of every voice.”

Common Cause NC calls on legislature to reject anti-voter bills