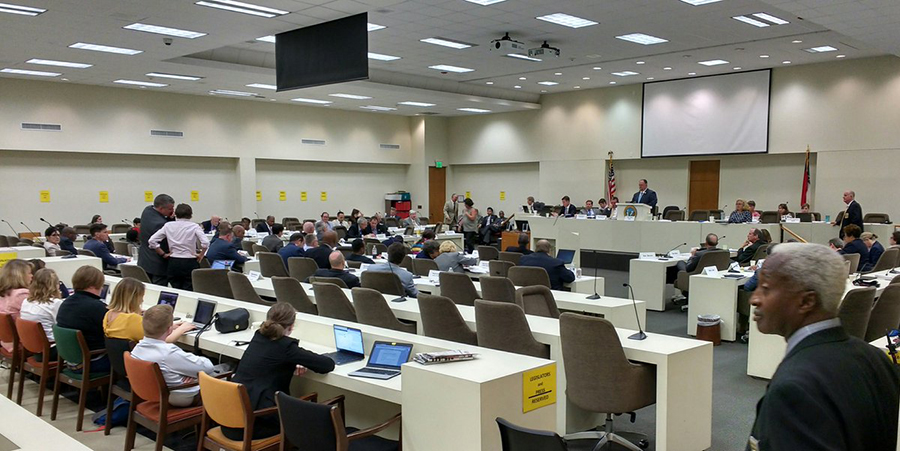 The majority of the committee rejected proposed nonpartisan standards that would have removed politics from the map-drawing process. Instead, the Republican-controlled committee adopted criteria that will use partisan political data in creating new voting districts.

“Today’s committee vote is deeply disappointing,” said Bob Phillips, executive director of Common Cause NC. “The fact is, a majority of the committee’s members – including Chairman David Lewis – are on the record as having supported independent redistricting in the past, either by voting for a nonpartisan redistricting bill in 2011 or by co-sponsoring similar legislation in ensuing years. And so it is profoundly troubling that instead of being true to their stated convictions, the committee has once again injected partisan politics into the redistricting process.”

Phillips continued, “This cynical politics-as-usual mentality has created a system in which incumbent politicians use gerrymandering to shield themselves from accountability to voters, and North Carolina citizens are left without a choice or a voice at the ballot box.”

“Since the legislature continues to put party politics ahead of the constitutional right of citizens to choose their representatives in fair elections, we call on the court to require nonpartisan criteria for drawing new legislative districts,” Phillips added.

In comments to the redistricting committee last week, Phillips urged legislators to adopt the same nonpartisan criteria found in House Bill 200, which has 39 bipartisan co-sponsors. That measure would take redistricting power out of the hands of partisan lawmakers and instead have nonpartisan legislative staff draw voting districts completely blind to partisan politics. An identical bill passed the Republican-led NC House in 2011 with broad bipartisan support, but stalled in the GOP-controlled NC Senate that year.

Since 1992, nearly half of all legislative races have had just one candidate on the ballot, due mainly to gerrymandered districts manipulated to unfairly favor one party or the other. That trend continued in last year’s election as millions of North Carolinians were deprived of any choice in who would represent them in the legislature.

An overwhelming majority of North Carolina voters support independent redistricting, as shown by a Public Policy Polling survey in April. According to the poll’s results, 80 percent of voters say it’s not fair for politicians to draw their own districts. That includes 85 percent of Democrats, 74 percent of Republicans and 80 percent of independent voters.

Over 260 civic leaders from 130 towns and cities across North Carolina have signed a petition calling on the legislature to pass independent redistricting reform. And more than 100 North Carolina business owners have launched a coalition calling for an end to gerrymandering.