Members of Common Cause NC on Wednesday delivered a petition to state House Speaker Tim Moore signed by thousands of North Carolinians calling for passage of nonpartisan redistricting.

House Bill 200 would establish an impartial process for drawing North Carolina’s congressional and legislative voting maps. The plan was introduced in February by a bipartisan coalition of 39 NC House members led by four prominent Republican lawmakers.

But despite widespread public support for the proposal, House Bill 200 has not been given a hearing in the NC House Rules Committee. In response, members of Common Cause NC brought the petition signed by nearly 4,000 North Carolinians to the legislature.

“I am here today for a simple reason: like most North Carolinians, I believe it is time for our state to adopt a fair way of drawing our voting maps,” said Mim Williams, a Raleigh resident. “Unfortunately, a small number of legislative leaders have refused to allow the NC General Assembly to vote on House Bill 200 or even let the bill be heard in committee. We are calling upon Speaker Moore to give House Bill 200 the vote it deserves.”

Under North Carolina’s longstanding system, whichever party controls the legislature also controls redistricting. For decades, the result has been gerrymandered voting maps that heavily favor one party or the other and reduce competition on Election Day. Since 1992, nearly half of all legislative races have had just one candidate on the ballot. That trend continued in last year’s election as millions of North Carolinians were deprived of any choice in who would represent them in the legislature.

House Bill 200 would end gerrymandering by taking redistricting power away from partisan legislators and instead give it to nonpartisan legislative staff. That independent staff would be required to follow strict, nonpartisan guidelines when drawing voting districts, without any input from legislators. The maps would in turn be sent to the full legislature for a simple up or down vote.

Among the over 220 bills passed by the NC House so far this session, the average number of co-sponsors is just 11. By contrast, the 39 co-sponsors of House Bill 200 is a clear sign of the measure’s unusually broad bipartisan support among members of the legislature.

An overwhelming majority of North Carolina voters also support independent redistricting, as shown by a new Public Policy Polling survey commissioned by Democracy North Carolina. According to the poll’s results released on Wednesday, 80 percent of voters say it’s not fair for politicians to draw their own districts. That includes 85 percent of Democrats, 74 percent of Republicans and 80 percent of independent voters.

“At a time when we see such deep political divisions, it’s notable that House Bill 200 has broad bipartisan support among House members and the public because it is a common-sense reform,” said Bob Phillips, executive director of Common Cause NC. “The dozens of House members co-sponsoring this bill, along with the thousands of North Carolina citizens that signed this petition, and the millions of voters who support fair redistricting all deserve to see House Bill 200 get a fair vote. We respectfully ask Speaker Moore to simply let this bill be heard.” 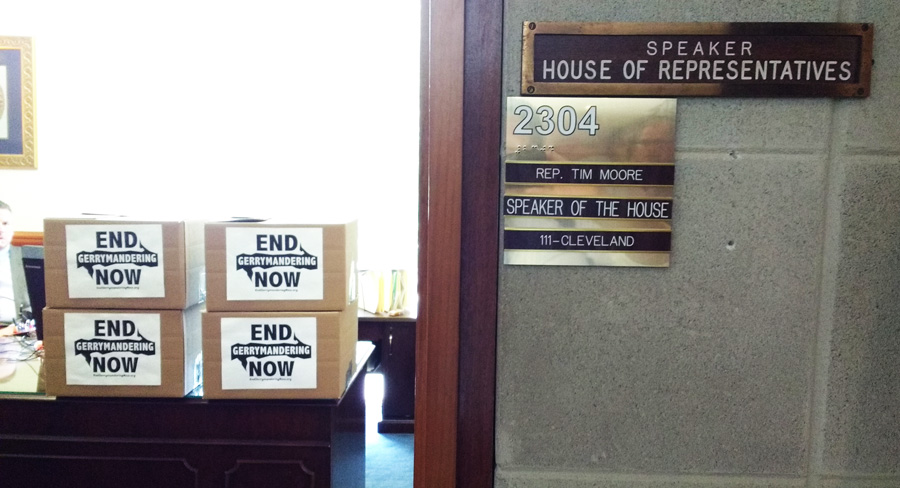