Students from seven historically black colleges and universities joined thousands of North Carolinians braving the rain to speak out for voting rights, equal rights and fair elections at the 2018 Moral March in downtown Raleigh. 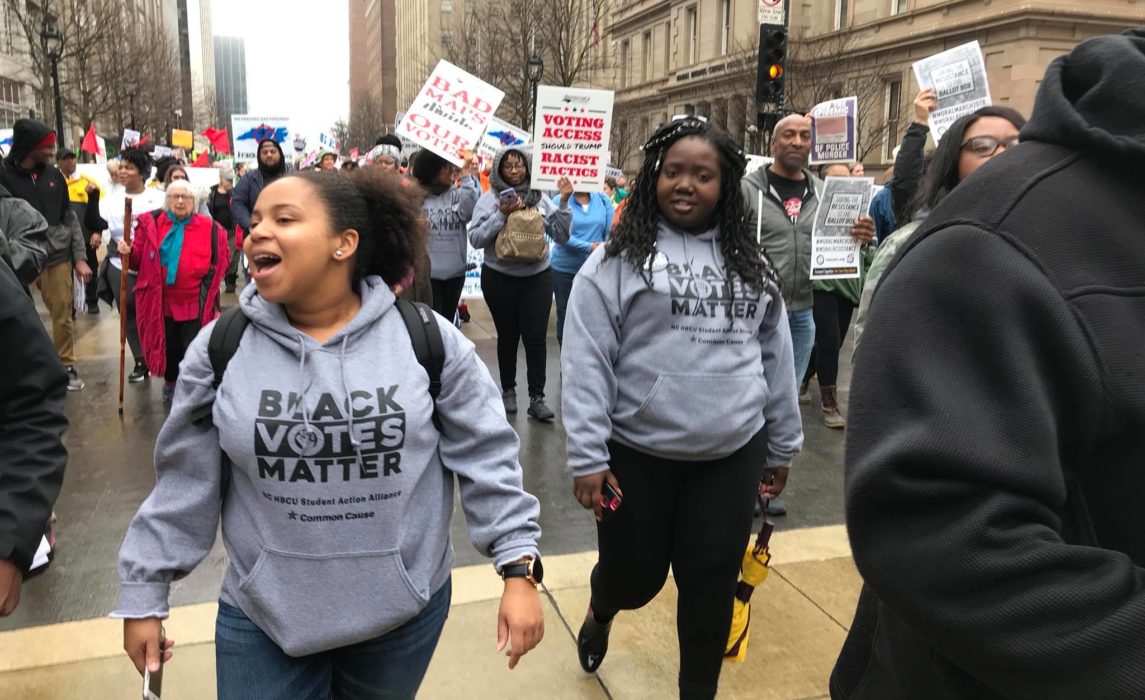 RALEIGH – Students from seven historically black colleges and universities joined thousands of North Carolinians braving the rain on Saturday to speak out for voting rights, equal rights and fair elections at the 2018 Moral March in downtown Raleigh.

“I believe that everybody in my community should show that they care,” said Diamond Rickets, a student at Shaw University and a Democracy Fellow with Common Cause NC. “A lot of people say that they do, but a lot of people don’t actually go out on a rainy Saturday morning and bring awareness to the problems that affect them.”

Rickets said she was motivated to march by the issues of immigration and gerrymandering. When asked what she would say to young people who may feel their voice doesn’t matter, Rickets replied, “If they all came together they would make a big impact. There’s strength in numbers. And the more that people actually do, instead of just say, will show.”

Among those on stage for the post-march rally across from the Capitol Building was Braxton Brewington, a Democracy Fellow with Common Cause NC and a student at NC A&T State University.

“Your vote is so much bigger than you,” Brewington told the thousands in attendance. “It’s about the environment. It’s about Dreamers. It’s about gerrymandering. It’s about women. It’s about Black Lives Matter.”

One of the top issues expressed at the Moral March was the need to end gerrymandering in North Carolina. Recent court cases have challenged the state’s gerrymandered legislative and congressional voting maps.

Among those lawsuits is Common Cause v. Rucho, which led to a federal court striking down the state’s congressional districts as an unconstitutional partisan gerrymander. The fate of that landmark case now rests with the U.S. Supreme Court.

While the fight against gerrymandering continues in the courts, there is overwhelming public support for enacting nonpartisan redistricting reform. One such proposal, House Bill 200, would take redistricting power out of the hands of the legislature and give it to an independent body that in turn would draw North Carolina’s legislative and congressional districts free from partisan politics.

House Bill 200 has 39 bipartisan co-sponsors in the NC House, but legislative leaders for the past year have refused to give the proposal a vote or even a hearing.

Meanwhile, over 100 business owners have launched a coalition calling for an end to gerrymandering. And more than 250 locally elected officials from 130 towns and cities across the state have asked the legislature to take politics out of the way North Carolina’s voting maps are drawn.

We're proud to join thousands of NC citizens who are filling downtown Raleigh today at the Moral March to take a stand for voting rights, equal rights and fair elections. This is what democracy looks like!Join the cause: CommonCauseNC.org/join#NorthCarolina #MoralMarch #votingRights #Raleigh #fairMaps

Wake residents speak up for Sunday voting, ask that Chavis be an early voting site