Some 150 runners and walkers braved nearly 90-degree heat as they wound their way through downtown Raleigh and past the NC legislature on Saturday at the 2nd annual End Gerrymandering 5K.

RALEIGH – Some 150 runners and walkers braved nearly 90-degree heat as they wound their way through downtown Raleigh on Saturday at the 2nd annual End Gerrymandering 5K.

Presented by Common Cause NC, the 5K started at Trophy Brewing before running along the border of a gerrymandered district, passed by the NC Legislative Building, then returned to Trophy for an after-party.

“Gerrymandering shields politicians from accountability and undermines the right of voters to choose their representatives,” said Bob Phillips, executive director of Common Cause NC. “Fortunately, we’re seeing growing momentum across the state to end gerrymandering, and we hope today’s run continues to raise awareness of the need to enact nonpartisan redistricting for North Carolina.”

The course followed part of the old House District 34 – dubbed the “mutant crab” – that was created by the Republican-controlled NC General Assembly in 2011 and used in the 2012, 2014 and 2016 elections, until a court ruling striking down gerrymandered legislative districts led to its redraw in 2017.

That district is emblematic of gerrymandered voting maps that have split communities, reduced competition in elections and been subject to repeated judicial challenges.

David Meeker, co-owner of Trophy Brewing and a board member with Common Cause NC, said that with recent court victories and increasing bipartisan support for reform, an end to gerrymandering could finally be on the horizon.

“It’s actually a really hopeful time. Between Common Cause’s work and a ton of other groups around the state working on this issue, 2019 or 2020 could be the years that we end gerrymandering,” Meeker said.

This year’s End Gerrymandering 5K saw twice the number of participants over 2017, perhaps a sign of growing awareness of the issue and strengthening resolve for reform.

Meeker said that Common Cause NC will continue to host the End Gerrymandering 5K so long as gerrymandering continues to plague the state.

“We’re going to do this every year until we end gerrymandering,” Meeker told those in attendance. “So I hope this is the last year, but if gerrymandering is not ended next year, we’ll be back.” 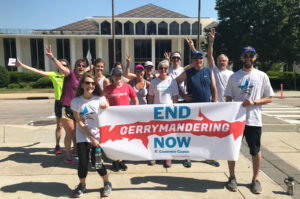 Thousands of NC teachers Rally for Respect at legislature