With the 2022 Election season quickly approaching, Nebraskans will head to their respective precincts to vote under a new statewide district arrangement for the first time. Last fall, the Nebraska Legislature fulfilled their once-a-decade duty to create new district maps in order to reflect changes in population; two Nebraska mathematics professors recently published an analysis of these maps revealing several flaws in the final versions. We feel their work is important to the issue of redistricting in our state and will summarize key takeaways in this post.

Dr. Steven Dunbar and Dr. Kristin Pfabe’s study examined population deviations in the Legislative district maps. Redistricting guidelines state districts are to be made congruous and compact in shape while being as close to equal in population as possible.

Exact target population is rarely achieved but the expectation is that districts stay within a deviation of 5 percent (meaning a district should not contain fewer or more than 5 percent of people than the average). Overly crowded or underpopulated districts can indicate an attempt to gerrymander, depending on the severity. 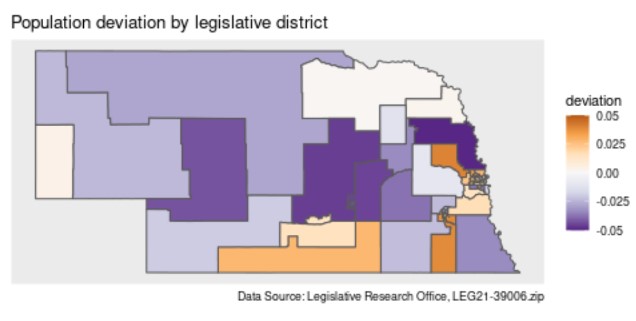 Analysis of the Legislative map revealed a particular pattern of overcrowding districts, specifically in the urban parts of the state. Conversely, rural districts in the state were underpopulated to offset the population disparity.

Using a sample of 30,000 alternative maps, they found the adopted Legislative map overcrowded to a degree more than 99 percent of alternatives. The overcrowding found was especially correlated with population density in the urban areas of Omaha and Lincoln, where more people live within a square mile compared to rural parts of the state.

Of the 15 overpopulated districts, 13 contained areas of either Omaha or Lincoln proper. Furthermore, the other two overcrowded precincts contained Bennington and Papillion, typically considered part of the Omaha area. 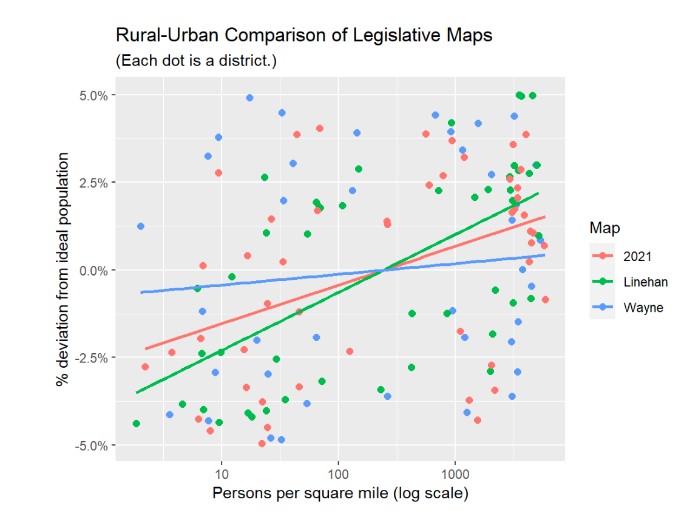 By overcrowding districts in Omaha and Lincoln, the Legislature effectively suppressed the representational power of voters in these areas and inflated the electoral influence of rural Nebraska. It is important to note that most of Nebraska’s BIPOC population reside in these two cities and this map disproportionately affects their representational power as a minority population.

As many Common Cause Nebraska members are likely aware, the 2021 redistricting process left much to be desired. Partisan divisions and a “behind closed doors” approach led to a set of maps that are far from perfect. The final product demonstrates the necessity to take this responsibility out of the hands of partisan politicians and establish an independent redistricting commission for 2030.

Once Upon a Time, There Was Reason