About Minnesota Alliance for Democracy 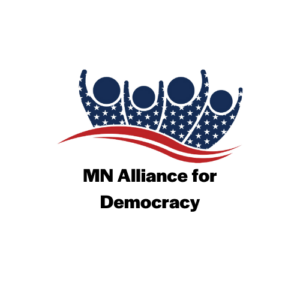 The Minnesota Alliance for Democracy is a nonpartisan conveying table created by Common Cause MN to strengthen and facilitate network connections among Nonprofits, grassroots coalitions and community activists working on democracy issues. Since 1970, Common Cause MN has taken on the powerful special interest and political leaders, regardless of party, and promoted reforms that expand public involvement and the political process. Simply put, holding power accountable.

Each of the participating organizations/members play a leading role in the following areas:  election reform, campaign finance reform, money in politics, voting rights, civil rights, transparency, redistricting, grassroots organizing, mobilizing and other issues.  The Alliance uses research, grassroots organizing, and advocacy to increase voter participation, reduce the influence of big money in politics and achieve a government that is truly of the people, by the people and for the people.

Minnesota Alliance for Democracy (MA4D) partners will work together in building an inclusive statewide nonpartisan network with individuals from various political perspectives, promoting pro-democracy reforms by reinvigorating meaningful engagement for all Minnesotans; especially for those who have been disenfranchised and marginalized.

The alliance will work toward this vision by fostering communication and collaboration among Alliance members and creating culturally and linguistically relevant education and activism tools for engagement; hosting forums; developing a grassroots visibility campaign leveraging statewide ethnic and community-based media; creating workshops on how to navigate local and state policy arenas; and organizing a plan for capturing the attention of elected officials and other key decision-makers.

Our Vision for Minnesota

We envision winning concrete, pro-democracy reforms that include breaking down barriers to participation in civic life, ensuring each Minnesotan has an equal voice within our democratic process and equitable access to the vote, while rebuilding trust in our state’s political process and government.

We want people to have confidence in their political system and feel ownership of their government, and we want elected officials to act on, represent and respect the diversity and interests of the people they were elected to serve in Minnesota.

Democracy requires active participation by the people, with a government that is accountable, transparent and where our voices are heard and acted on. Informed Minnesotans with access to the political process are empowered voters and better able to engage their elected officials, work to elect representatives who are more responsive to their constituents, and move decision-makers to adopt policies that better address community needs and goals.

We work to cultivate a culture and systems that put racial and social justice at the center because we recognize the impact that race, class, gender, sexual orientation and other cultural factors have on our system of government in Minnesota. As our population grows more diverse, the population of voters should reflect the demographics of the state for fair representation and a strong democracy.