Lobbying expenditures grew by a staggering 40% among the top 10 paying employers. 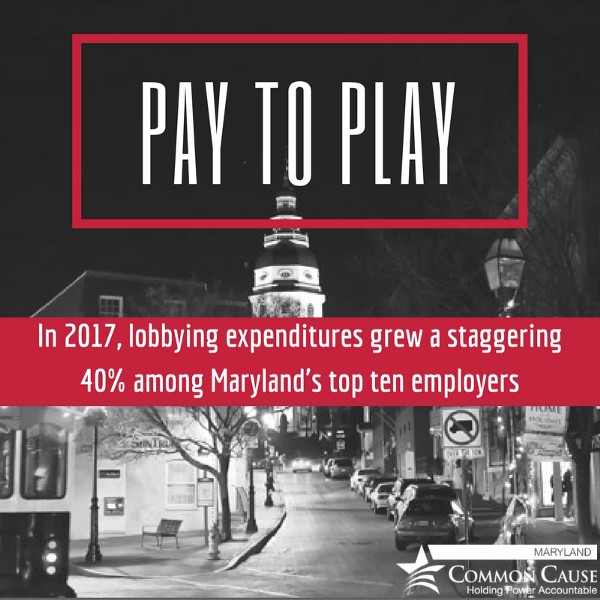 Common Cause Maryland released this report analyzing the lobbying activity during Maryland’s 2017 Legislative Session. Our research found that lobbying expenditures stayed relatively stable, with the primary employers spending a total of almost $19 million. However, new employers and industries emerged, continuing to pour large sums of money into lobbying efforts to promote their agendas.

Susan Radov, a Summer Research Associate for Common Cause Maryland who produced the report, remarked: “It is troubling when employers spend millions of dollars to be heard by our General Assembly. Everyday people cannot compete with that type of spending, and risk their voice being drowned out.”

“Yet while businesses, yet again, spent tremendous amounts of money on lobbying efforts, it is reassuring that big spending did not always translate to big victories by these employers.”

Common Cause Maryland synthesizes lobbying data provided twice a year by the State Ethics Commission, examining the leading employers’ full expenditures and target issues. The ethics report lists employers that reported at least $50,000 in lobbying expenses, as well as lobbyists who reported at least $50,000 in lobbying income, from November 1, 2016 to April 30, 2017. In this 2017 report, CCMD analyzed the list and categorized 200 employers into 29 broad industry categories.

“Overall, lobbying activities remained fairly consistent. But it is interesting to see new players and tactics that cropped up this year in Annapolis.”